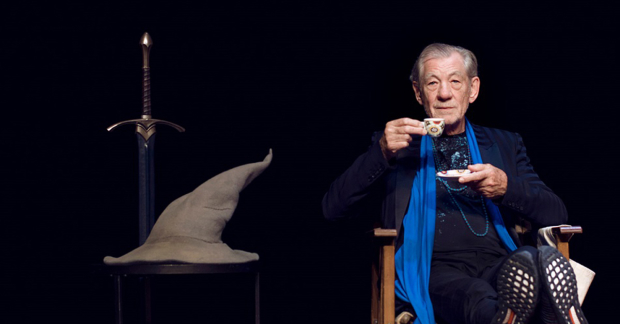 “Now” is the first word spoken in Shakespeare’s Richard III. Gloucester enters and begins with the famous line about now being “the winter of discontent“. But that’s not why Ian McKellen points this out for us. It’s somewhat the opposite, as there is no discontent anywhere within his one man show, Ian McKellen on Stage that is taking up residency in the West End for a limited engagement (and a one nighter in NYC I believe). The ‘here and now’, he wisely states, is the heart of everything when it comes to live theatre. It’s why we sit in that darkened room, crammed together in our seats waiting for the lights to go down and the curtain, even if it’s just a symbolic one, to rise up into the heavens. Film, you see, is somehow back then, a recorded moment when it was truly filmed, and it will remain, as always, perfectly recorded. Live theatre, filled to the brim with the blood, sweat, and tears of the ‘now’ is what keeps us coming back, time and time again. Or at least, that’s what keeps me returning. He talks engagingly about the excitement of the experience, about how each moment is a singular creation that will never be repeated exactly in the same way ever again. It’s an idea that makes my heart tingle and my blood race. Luckily, after all these years of writing for this review blog (not all that long in comparison to his expansive career), I still feel the rush of the theatrical ‘here and now’, internally (and sometimes) externally clapping my hands as the house lights dim. There’s joy and excitement each time, and with this particularly gifted ringmaster as our guide to Tolkien, Shakespeare, Others, and You, the thrill of what might happen is as intoxicating as any drink one could ever get from the theatre bar.

It is instantaneous, grabbing hold of our hearts and souls from that first dramatic staged reading from the actual text of ‘The Lord of the Rings‘ to the final boxed bow. He has a way of creating a visual in our mind’s eye as he perfectly retells from Tolkien’s epic novel the moment when Gandolf stands his ground against an evil shadowy creature of the dark, for the sake of the Fellowship. “Go back to the shadow” he says, before proclaiming “You Shall Not Pass!” Anyone who has seen the movies knows what a powerful moment that is in the story and in the film, and with the novel in his hands, standing alone on the wide but wonderful Harold Pinter stage, he pulls us into the emotional gorge. We are in for a ride, apparently, and we cannot deny his Magneto personality.  I know the reality of the stage, but he has the brilliant shine in his eyes of a young passionate school boy telling us ghost stories and loving watching us squirm. He seems to be looking directly into my heart and soul, smiling at my unblinking attention, knowing that we are happily his for the afternoon/evening, and he, most beautifully is ours. At least for the next magical two and half hours, a performance that won him the 2019 Evening Standard Award Editor’s Award. Most deservingly.

The man is filled to the brim with energy and delight. He calls out to us, sharing his passion and stories at every opportunity. He pulls a young man up on stage to hold Gandolf’s sword, giving him a selfie and a legendary memory that this young man will hold forever in his heart.  It’s truly touching to watch this star engage.  His eyes sparkle with the love of theatre and the blessings it has given him, and us.  He regales us with stories that tickle and break our hearts. He hypnotizes us with the touching story of ‘Gus the Theatre Cat’ from T S Eliot’s Old Possum’s Book of Practical Cats, a part the actor is set to play the part in the upcoming musical film. It’s sweetly perfect and a treat to witness. The first act is a guided tour through McKellen’s life and career, and the asides are hilarious and charming.  He shares his love freely, so much so that the intermission isn’t a time for him to relax backstage, but an opportunity to come out and wander around the stalls, saying hello, shaking our hands, and transporting us with his winning smile and epic grace. The second act lets the actor take us on a journey through his beloved Shakespeare plays, inviting the audience to name them all, and giving us a bit of himself with the selected. He serves up each with a thoughtful rumination, wry comment or heartfelt (or naughty) recollection – except for Troilus and Cressida: “I have nothing to say about Troilus and Cressida.”

If you haven’t had the honor to see this legend and gift to the world, find a way. He digs in to Romeo, and envelops Juliet. He does it all miraculously, and gives us so much delicious theatrical meat to chew on that the ‘here and now’ is as tasty as one could ever have hoped for. Since the start of the year, he has been touring venues both large and small with this one man show raising money for theaters, schemes and communities, most generously. He’ll even greet you on the way out, with a red bucket in hand, smiling and giving us more of his love and charity. So “fly you fools” to the box office, because this treat is too deliciously rich to miss.

Forbidden Broadway: The Next Generation Gets a New Life At The York Theatre
Casting for The Devil Wears Prada