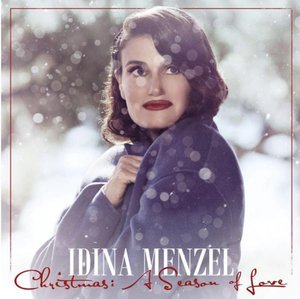 Idina Menzel is having a terrific holiday season. The Tony winner returned in Disney’s Frozen 2, will be appearing in the Macy’s Thanksgiving Day parade, performed for Sax 5th Avenue’s Window lighting but she also just released a brand-new holiday album, Christmas: A Season of Love.

We are in love with a couple of songs on this album, but it is the gorgeous “At This Table” is the perfect Thanksgiving Day and everyday song. Menzel co-wrote this song with Jonas Myran and concerns inclusion and coming together around the holiday season. Menzel says, “Now more than ever, it is important that we not only respect, but celebrate the differences between us. The holiday season is the perfect time to look past what divides us and embrace one another just as we are.”

The album features Emmy winning actor Billy Porter, who duets with Idina on “I Got My Love To Keep Me Warm.”

Frozen co-star Gad is featured on a duet of “We Wish You The Merriest.”

Menzel is also joined by husband Aaron Lohr on “I’ll Be Home For Christmas.”

There are also non-Christmas songs include “Ocho Kandelikas,” a Hanukkah song in Ladino, Rent‘s “Seasons of Love,” and “Auld Lang Syne.”