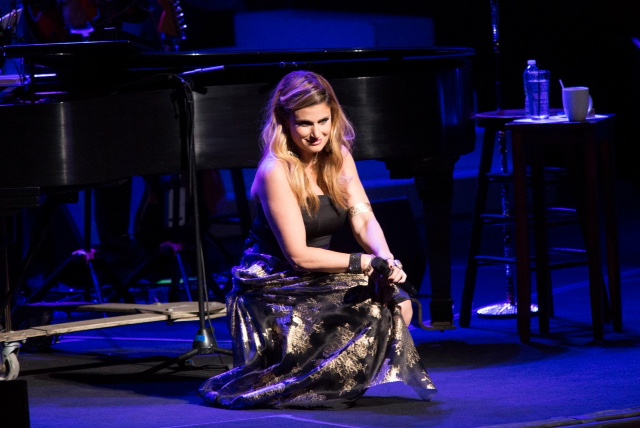 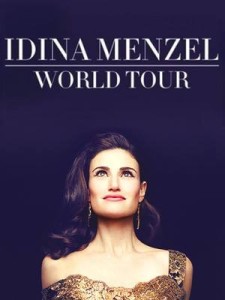 There is no doubt Idina Menzel has a fervent guardian angel keeping a watchful eye out on her and her career. Initially cast in the original Broadway company of a little show called Rent, Menzel played the enigmatic performance artist, Maureen, in 1996, and was nominated for a Tony Award for her debut performance. Menzel was then bestowed the Tony Award for Best Actress in a Musical as Elphaba in the original production of a show you may have heard of before, Wicked. Then in 2014 she had a triumphant return to Broadway as the lead in the Tony nominated star vehicle, If/Then, earning her a third Tony nomination.  Next,  she was honored with the Breakthrough Artist Award at the Billboard Women in Music Awards for a little song and film you may be familiar with; Let It Go from Frozen, the global phenomenon that still shows no signs of stopping, almost 2 years later. Her role in this, the titular Queen Elsa, of course. Add to this list, a reoccurring role on Glee, a supporting part in another Disney film hit, Enchanted, the Travolta mispronunciation of her name heard around the world, and  “Adele Dazeem” I mean to say,  Idina Menzel is at the top of her craft.   Bringing her powerhouse, belting, Mezzo-soprano voice and descending on Chicago at the Jay Pritzker Pavilion in Millennium Park for a one night only event concert.  While it was almost 90* that night, the real heat was the sizzling talent of Menzel center stage, in a 95 minute concert combination of show tunes, serenades, accolades, and some real life Disney magic. 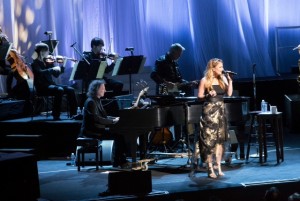 Giving the fans exactly what they commanded, Menzel opened the show with her signature track from Wicked the musical, Defying Gravity. Following up with the Barbra Streisand classic,  Don’t Rain on My Parade.  “Is there a single straight man here?” she jibed to the enthusiastic audience. When pointing to an older gentlemen sitting just a few rows behind me, she deadpanned, “There he is.  You probably don’t know who the hell I am, sir.”After the giggles subsided, Menzel broke out into the song Brave from her debut album Exhale that she kidded was “an old album that only about three people bought.”Continuing the theme of empowerment that has linked almost two decades of her work, she concluded this initial set with I Stand. Clad in a simple black, belted, strapless dress with a silver and black printed wrap tied around the waist, which she discarded, and completing her look with a pair of silver chunky heels, which she also quickly discarded.“The more famous I’m getting the bigger the stage” she exclaimed as she ran from corner to corner of the expansive Jay Pritzker Pavilion stage, waving at her eager fans. 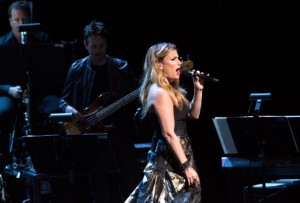 This self titled “Long Island Girl” shared with the audience “as a kid I had this voice and I was afraid to shine.”Well, she has clearly gotten over that, as she next dazzled with The Wizard and I, also from Wicked.    “I was the very first, original green girl” she preened. Bringing out her own stool, center stage, Menzel next crooned River by Joni Mitchell. As we were all glowing from the heat and humidity of the evening, Menzel jibbed she will “now be associated with all things cold weather for the rest of my career.”A graduate of New York University’s Tisch School of the Arts, she shared a freshman girl’s tale of unrequited love by her professor (“another gay” she chortled) and then wowed with a mash-up of Love for Sale by Cole Porter and Roxanne by The Police.   Finishing her second set with an all singing salute to the “Big Belting Woman of Broadway, Ethel Merman.”Melding the classics, There’s No Business Like Show Business, Anything Goes and Everything’s Coming Up Roses, Menzel’s throaty delivery sent chills down the spines of her enthralled audience. 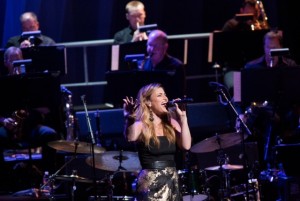 If the Broadway songs were loud and bodacious, her next number Still I Can’t Be Still was delivered quietly and intimately, Menzel on her knees, center stage. She blended a few verses of Creep by Radiohead into this mix as well. It seems there are days even this Queen of the spirited, triumphant and empowering  ballad of self esteem and self worth doesn’t want to get out of bed either.  This was Menzel at her most humble and earnest. 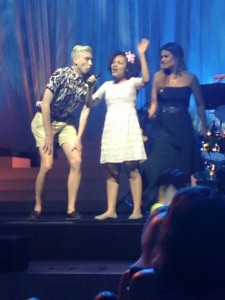 Next, selecting three members at random from the audience to duet with her Take Me Or Leave Me song from Rent,  Menzel was in for quite a surprise herself. It was a delightfully fortuitous moment when Chicago’s own South Side spitfire Ariana Burks happened to be in the audience, dressed in one of her signature oversized hair bows, when Menzel exclaimed “the one in pink”motioning for Ariana to join her onstage, out of a sea of tweens screaming“pick me, pick me.” It was then that real magic ensued. This dynamite 15 year old, last seen headlining Chicago Children’s Theater’s  Wonderland, Alice’s Rock & Roll Adventure commanded the stage like a young Aretha Franklin, with Menzel giving her nothing but respect. “I love it when they can sing” Menzel kidded before giving the teen-age chanteuse a hug and wiped away the tears staining the young fan’s face.    Then ending this set with the theme, No Day But Today,  a quiet tribute to Rent writer and creator Jonathan Larson.  “Live for Today!” She exclaimed.  “I am present.  I am in the moment.  I am living this.” Which then lead to a lovely No Day But Today audience sing-a-long too.

Speaking then of how life sometimes imitated art, Menzel waxed poetically of her most recent return to the Great White Way of Broadway in the musical If/Then. “You have the power, if you want, to start your life again” she said before bringing the outdoor venue onto its feet with her epic vocal runs of the tune Always Starting Over.  Ending with an a cappella version of For Good from Wicked with a wild twist addition of The Red Hot Chili Peppers Give It Away. Inviting all the small children to the foot of the stage, Queen Elsa finished her concert with a 10 minute plus version of the Oscar award winning anthem, Let It Go.  Passing the microphone around to almost a dozen small children with various vocal talents, all delighted that “the cold never bothered me anyway.” What a charming treat for all, before Menzel took the mic back, returned to center stage to belt out the remaining authoritative final notes of her signature, career defining,  ballad.

After almost 10 minutes of thunderous ovation, Menzel reverted back to her stool to finish her show with its final two songs.  The first, titled Child, a new piece written especially for her son, who she joked “doesn’t like when Mommy sings.”Boy will he change his tune when he gets a little older. She concluded the evening with a song she said she has sang “since childhood,” a sweeping rendition of Little Orphan Annie’s  Tomorrow, which we all know is “only a day away.”Expressing her love for getting to do what she has always dreamed of doing, Idina Menzel waved good-bye to the Windy City crowd and wrapped the night with a simple “Thank You, Chicago.”