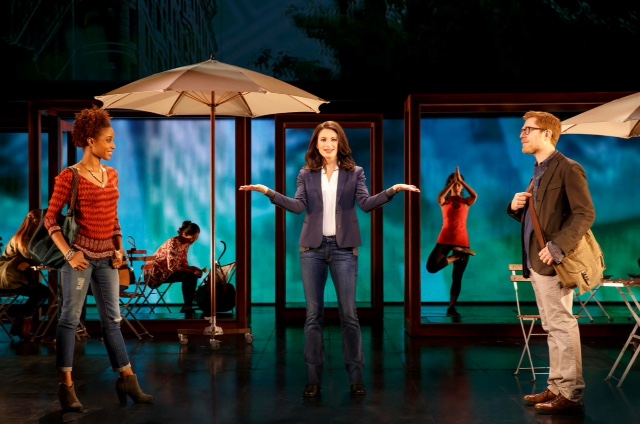 If/Then-Crisis of Identity Sounds So Good

If/Then-Crisis of Identity Sounds So Good 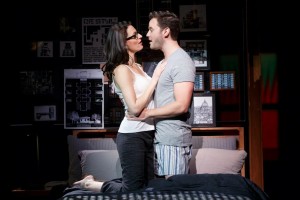 Socrates once notably exclaimed “the unexamined life is not worth living.” In the new musical, If/Then, now playing at the Oriental Theatre, the examination of paths taken and not yet taken are at the core of the material. Reuniting the creative team of another show featuring a central female protagonist, Pulitzer Prize and Tony Award-winning Broadway Musical, Next To Normal, composer Tom Kitt, book writer/lyricist Brian Yorkey and director Michael Greif join forces to tell the story of a recent divorcée, and her return to New York City in an attempt to rebuild her interrupted life. Or lives as the case may be here. Elizabeth is the city planner whom all the action surrounds in this contemporary romantic dramedy. If you subscribe to the philosophy that life truly is about the journey, and not the destination, the dualities of If/Then will prove itself both absorbing and intriguing. 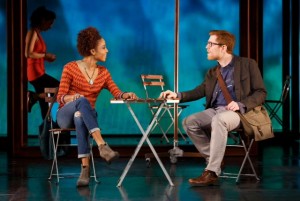 This modern day Manhattan story of a woman balancing dual realities centers on Elizabeth (Jackie Burns, successfully stepping in for the remainder of the tour, replacing original leading lady, Tony nominated, Idina Menzel) who has closed the chapter of her life we will dub “suffocated suburban marriage in Arizona” and returned to the Big Apple to start a new and exciting chapter, or two.  The action begins as she arrives in Central Park to meet up with two friends, Lucas (Original cast of Rent star and Chicago native, Anthony Rapp) an old college friend and community activist excited to reconnect and Kate (American Idol’s Tamyra Gray) a kindergarten teacher, strong-willed, vibrant new neighbor, who also happens to be a lesbian. Here is where the story quickly collides with the arbitrary whims of fate. Elizabeth’s story splits into two distinctive narratives.  We have Liz and we have Beth. The two parallel paths may muddle a little for the audience, but that is ok. Liz wears glasses, Beth doesn’t. Liz settles for a smaller life as a homemaker, wife, mother and part time teacher, while Beth becomes an award winning city planner. Superficially, Liz is always swathed in red and orange set lighting, while Beth is bathed in tones of blues and greens. A clever and subtle lighting design technique created by Kenneth Posner. 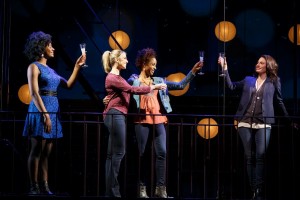 Both stories unfold simultaneously as this modern woman negotiates her new urban lifestyle(s). If Liz follows Kate, then she meets a handsome military medic, Josh (Matthew Hydzik) quickly falls in love and ends up having two children. Kate rebrands her “Liz” because “Beth lives alone with a cats.” Not this Beth. If she leaves with Lucas, then Beth takes a call from her old boss, Stephen (Daren A. Herbert) and lands a fast paced, high stress job as an Urban City Planner, where she quickly rises through the ranks. “I believe in choices” our heroine cracks as she carefully negotiates both realities. “I’m older, but hardly more wiser” our prickly but smart mouthed leading lady laments, eventually concluding, “I believe in choices.” While the two realities may fall into customary clichés, the mother character, Liz, is underwhelmed by her lackluster career, the career woman, Beth, must remain single and childless to make it in a man’s world, the witty soundtrack makes up for any story deficiencies. Early numbers “What If?” and “It’s a Sign” delight, while “No More Wasted Time” could become an anthem for everyone. 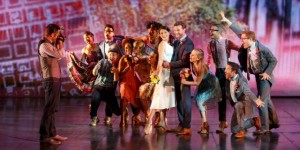 I was lucky enough to have seen this production twice in New York with Menzel at the helm. The first time was during the “Adele Dazeem” scandal, thank you very much for a world of free global publicity John Travolta. This show was clearly designed as a star vehicle for Menzel and I had concerns about how this would play when she eventually stepped out. Jackie Burns plays her Elizabeth/Liz/Beth with a bit more humor, which made her a slightly more engaging character. Both women have extraordinarily powerful singing chops, put to the test with this vocally rigorous soundtrack. Trust me, there are more (vocal) runs on display here than in the summer Olympic games. The entire cast steps up to the marathon vocal heavy lifting required, from start to finish. Commencing with giggles and applause induced to the clever tune “What the F*ck” a comical ode to the bad decision making processes while dating “I’m accomplished and I’m funny I’ve got wisdom and wit.  And a taste for certain men who will treat me like Sh*t. So romance has again run amock, Oh what the  fu*k” to the powerful, heartbreaking and complex ballad “Always Starting Over” If/Then delivers. “If we’re always starting over, every brand new morning.  Then we’re always starting out with the end in doubt.” Liz/Beth and crew may travel two distinctively different trajectories, but the sentiments of love and loss will resonate, personally, with every viewer. I also remember commenting upon my initial viewing, this show is veeeery New York with numerous digs about life in the suburbs, The Mets, The Yankees, and Applebee’s, just to name a few, but my worries were for not. Everyone chortled at the Applebee’s joke in Chicago too.

This thoroughly modern tale makes no apologies for being uncompromisingly contemporary. Larry Keigwin’s light-footed choreography during “Ain’t No Man Manhattan” could be found in any modern music video  or in a half dozen commercials. I mean that as a complement. The same could be said for Emily Rebholz’s costume design. More than half the cast is continually dressed in denim or black, the standard uniform for any NYC urbanite. One thing altered for the tour, the set design by Mark Wendland. Gone is the large mirror that hovered over the action, purposely crafted to add another parallel layer to the duality of the piece. It is now replaced by large screens with projected New York City street maps as a back drop instead. I will presume this alteration was made to easier fit the set into the many different stage venues the tour will be playing for the remainder of the year.

If you are looking for a thought provoking, witty but not too sophisticated, modern tale, with a woman as the star, If/Then fits the bill nicely. Act two may get a little darker in tone, and a little “out there” – a plane crash, really? – however the bonds crafted by both the biological and chosen family Elizabeth/Liz/Beth creates for herself rings distinctively true. With a divorce rate now over 50% and a work force that is downsized in equal proportion to being hiring, everyone will find themselves starting over at some point in their lives, like it or not. A sumptuously sung soundtrack helps to lift this production when the dual world’s story technique begin to stretch. All involved are at the top of their game, and I cannot think of a better reason to see a show then that.

If/Then is now playing at the Oriental Theatre through March 6, 2016

Suzanna BowlingOctober 24, 2021
Read More
Scroll for more
Tap
A Room of My Own A Show For The Politically Incorrect, Foul Mouth People of The World
Josh Young Makes His Cabaret Debut at Feinstein’s/54 Below