I’m Gonna Make You Love Me Ain’t Too Proud: The Life and Times of The Temptations 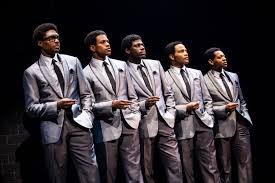 I’m Gonna Make You Love Me Ain’t Too Proud: The Life and Times of The Temptations

If you love the music of The Temptations, amazing singing, smooth dancing, a show light on book, then you will adore the electrifying Ain’t Too Proud: The Life and Times of The Temptations. With choreography by the Sergio Trujillo, performances by Ephraim Sykes, Jeremy Pope and Rashidra Scott this jukebox musical, is a cut above the rest. What suffers here is the book by Dominique Morriseau that seems more like a memory play of Otis Williams (Derrick Baskin), than engaging scenes that draw us into the action.

Williams is our narrator as we are introduced to lead singer, ego driven and volatile David Ruffin( Ephraim Sykes), the moody Eddie Kendrick (Jeremy Pope), bass singer Melvin Franklin (Jawan M. Jackson) and lady’s man and substance abuser Paul Williams (James Harkness). As Temp’s leave or are kicked out, 24 men rotated in and out of the group.

Otis’s three marriages put Josephine Rogers (Rashidra Scott) at the forefront. Not being able to band with their brothers over the political turmoil of the times and the loss of the song “War”, show the internal struggles of the group. When Ruffin is booted for too much partying and missed gigs, his rejection brings about a slow undoing of the group, despite the talented replacements.

Sykes brings knock out vocals, mad dance skills and scary implosions onto the stage. It is hard to watch anyone else when he is on stage. Pope who was outstanding in Choir Boy, brings another magnetic performance to the stage. Rashidra Scott almost steals the show with her moment in the spotlight. This cast is so multitalented, it is awing.

Director Des McAnuff best known for the Tony-winning “Jersey Boys,” production brings “My Girl,” “I’m Gonna Make You Love Me,” “Papa Was a Rollin’ Stone,” “Get Ready,” “If You Don’t Know Me by Now,” “Just My Imagination”, “Ain’t Too Proud to Beg,” and more to life along with Trujillo. There is never a dull moment in this show. The 18-member orchestra led by Kenny Seymour keeps this show musically satisfying.

Ain’t Too Proud: The Life and Times of The Temptations: Imperial Theatre, 249 W. 45th St.