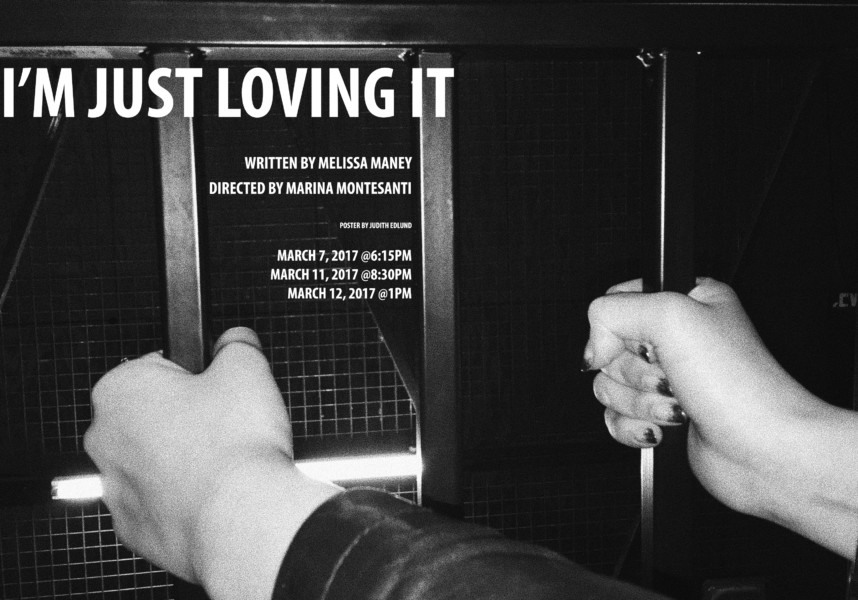 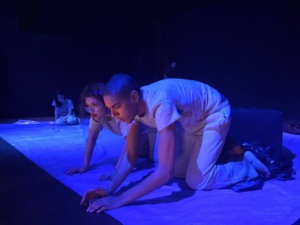 I’m Just Loving It by Melissa Maney is set in a realm where nightmares come to life. We meet the sympathetic Glute (Eden Rubinpour) who believes in saving the week and the vulnerable. Trapped inside this hellish place with her is Kane (Lamin Leroy Gibba) who has been blinded and is now out for himself. They have seen others come and go, beaten and hurt by a man only known as Red (Morgan Fay). They live in fear of who will be his next victim. With a crash and a bang the newbie (Belissa Escombedo) shows up and Glute becomes protective where Kane only wants to torment. Like some children of abuse, he has become the abuser. This short play ends with Red coming in and in a surprising twist we learn the abuser is someone we all know and who little children love.

The cast is uniformly good, except for Ms. Escobedo who is the week link. Instead of seeming frightened and lost, she just seems out of it and it confuses the play.

The set was interesting as was the lighting and sound by Eric Nightengale. The direction by Marina Montesanti was well done and captured this terrifying landscape. The movement by Rae Hass also added to this hellish journey.

Ms. Maney’s script is creative, flowing and frightening. Her dialogue is well thought-out and we are easily put headlong into this phantasm. I do have questions about the ending, but a longer script would solve this dilemma.

My only question for this script is who will produce I’m Just Loving It and where it can play. There are horrorfest’s that this is perfect for. This is truly a show that is disturbing and chilling.