Imagining Madoff﻿ Left Me Wanting to Know The Truth 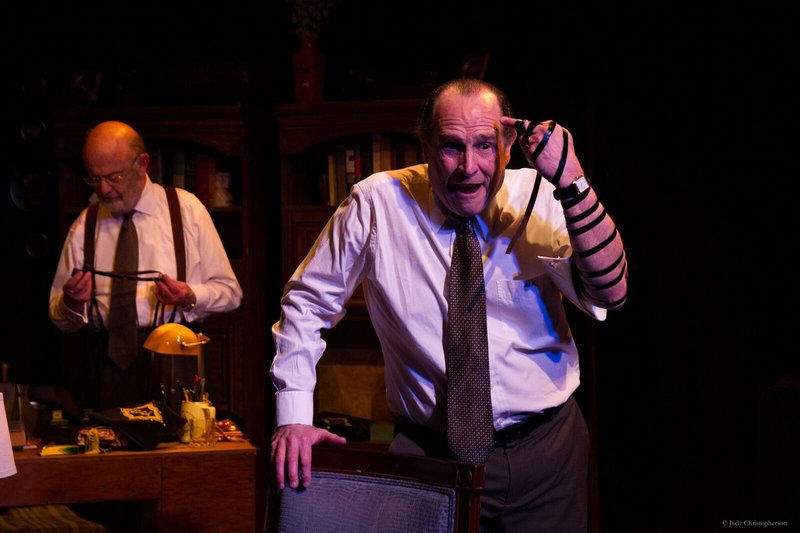 Imagining Madoff﻿ Left Me Wanting to Know The Truth

Deb Margolin’s Imagining Madoff began in April 2010. One of the characters was based on Elie Wiesel and upset him so much that he called the play “obscene” and “defamatory”. He threatened legal action to prevent the play from being staged. Wiesel who was one of Madoff’s most notable victims, lost his life savings to Madoff’s in addition to more than $15 million to a charitable foundation he operated. Wiesel became a character in Imagining Madoff because Margolin felt that he was “synonymous with decency, morality, the struggle for human dignity and kindness”. The Wiesel character recounted his concentration camp experiences and provided meditations on repentance. Though Wiesel’s name is not being used, the role of Solomon Galkin (Gerry Bamman) does exactly that.

The main secretary for Madoff looked a little like Kris Jenner. She was anything but insecure and turned tail and worked for the FBI to convict Madoff. The secretary (Jenny Allen) whom I think Margolin is depicting, is made to seem like an insecure, low self esteemed woman, but she handled the financier’s top clients. When arrested and jailed she had as much as $50 million in her accounts, multi-million dollar homes in Long Island and Florida and drove a $100,000 Mercedes.

I bring all this up, because in seeing Imagining Madoff every conversation seemed false. At first I thought it was because the actor playing Madoff (Jeremiah Kissell) played nine tenths of the play directly to me, literally. He is talking to a reporter and I seemed to be the person he chose. It was disconcerting, especially when comparing his penis to female genitalia and describing it as a wallet or talking about his female conquests.

The conversation between Galkin and Madoff, seems more like the tale of the big bad wolf and little red riding hood. I actually wondered when he was just going to finish the deed and eat the spiritual man, who seems to have lost his faith. By the way the story about Abraham, is about faith not trust.

Towards the end the secretary talks about the man who committed suicide and I thought could this possibly be the Galkin character? Turns out it was a well-connected hedge funder from Murphy’s Fairfield Greenwich fund who had invested more than $7 billion with Madoff and ended up paying out $125 million to settle a lawsuit related to the Madoff case.

The cast is competent. Director Jerry Herman does the best he can with the small space, but there was nothing new learned here and again nothing seemed based on reality. This was a case that affected over 21,000 victims and over $65 billion in paper wealth and $17.5 billion in cash. There is a much better story here.

Suzanna BowlingMay 12, 2022
Read More
Scroll for more
Tap
He Says: The New Group/Vineyard’s Daddy Stages a Poolside War for Control of a Young Artist’s Soul
He Says: Fiddler on the Roof, In Yiddish, Sounds Crazy? No,… Not At All. It’s Actually A Blessing.