In Conversation With Keith Hamilton Cobb of American Moor 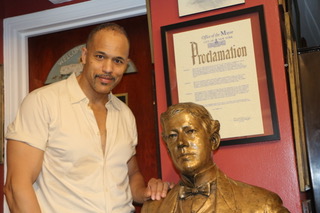 In Conversation With Keith Hamilton Cobb of American Moor

Photo and video by Magda Katz

Keith is a world-renowned Shakespeare performer also known for his work on TV shows such as “All My Children” and “The Young and the Restless.”

His new play American Moor is an extremely timely piece about Shakespeare and race in America that has received much critical acclaim. The play tells the story of an African-American actor auditioning for the role of Othello who must respond to the dictates of a younger, white director who presumes to better understand Shakespeare’s iconic black character.

T2c sat down to speak with this articulate actor/ writer at The Lambs, the oldest actors club in New York.

You can see American Moor presented by Red Bull Theatre, at The Cherry Lane Theatre, 38 Commerce St. until October 5th.

Suzanna BowlingNovember 19, 2022
Read More
Scroll for more
Tap
Lois Robbins L.O.V.E.R. Redeems Itself After All The Boyfriends and Sex
Da Vinci & Michelangelo: The Titans Experience Not As Cool As Mark Rodgers Thinks