In Conversation With Michael Longoria 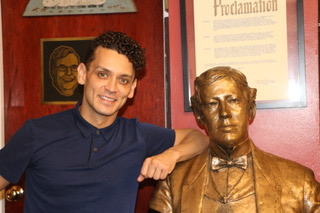 In Conversation With Michael Longoria

Michael Longoria is known best for his roles in iconic shows like Jersey Boys (where he played Frankie Valli) and The View Upstairs. For the past 10 years he has been starring in The Midtown Men concert tour. Their live concert Meet The Midtown Men aired on PBS.

T2co had a chance to talk to this prolific artist about his newest album.

Longoria has been crooning across the world. He made his Broadway debut in the smash hit musical Hairspray (2003 Tony award for Best Musical), later creating the role of Joey in the original Broadway cast of Jersey Boys (2006 Tony Award for Best Musical) before taking over the role of Frankie Valli. In 2017, Longoria created the role of Freddy in the original Off-Broadway cast of The View UpStairs and can be heard on the original cast album. He has appeared on television as the lead vocalist for Cirque du Soleil on the Season 9 Finale of America’s Got Talent,Broadway Under The Stars: A Tribute To Harold Prince, the Opening Ceremonies at The U.S. Open and as animated characters on Dora the Explorer.

Longoria also appeared in the documentary film One Night Stand. As a headlining solo concert artist, Michael has appeared at Caesar’s Palace in Atlantic City, co-staring with SNL’s Joe Piscopo in That’s Life! As a singer-songwriter, Longoria has performed his original songs at Joe’s Pub, The Cutting Room, CB’s Gallery and Caroline’s on Broadway. In 2016, Longoria’s solo debut Broadway album,Broadway Brick By Brick, reached #2 on the iTunes Vocal Album Chart. That year, Longoria was nominated for Best Male Vocalist and Best Cabaret by The Glam Awards.

Following the release of his critically acclaimed Christmas album, Merry Christmas Darling, Michael Longoria takes us to the cinema with a collection of his favorite songs from the silver screen. Like They Do In The Movies. Longoria’s cinematic love-note includes classics like “Evergreen” from A Star Is Born, “I Will Always Love You” from The Bodyguard, “Take My Breath Away” from Top Gun and “Unchained Melody” from Ghost. The album also features the debut of an original song written by Michael and arranged by James Dobinson called “Kiss Me (Like They Do In The Movies). Like They Do In The Movies features arrangements by Rona Siddiqui and James Dobinson, and is produced by Grammy nominee and 12-time Emmy Award winner Michael Croiter.

and in San Francisco Wednesday, October 16 at 7:30pm at Feinstein’s At The Nikko, 222 Mason St, San Francisco, CA.

Broadway Records will release Michael Longoria’s new studio album, Like They Do In The Movies,digitally and in stores, on Friday, October 11, 2019. The album is currently available for pre-order at www.BroadwayRecords.com.