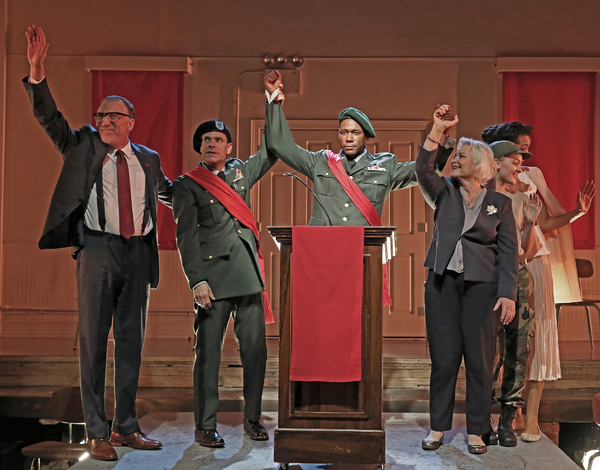 In Coriolanus Politics Are Spilling Over

In Coriolanus Politics Are Spilling Over 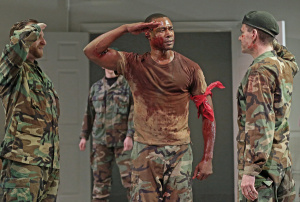 The Red Bull Theatre has taken Shakespeare’s Coriolanus, by the horns. Thanks to the political climate of the show which opened Sunday at the Barrow Street Theater takes on a profound relevance. Michael Sexton, has streamlined this production so minor characters are cut and it is long but the staging is powerful and the acting sublime. 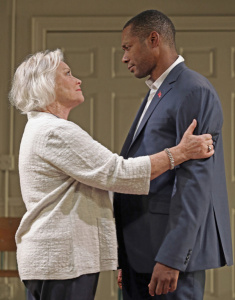 Sexton has set the show in contemporary times. Rigged elections, scheming, manipulation, poverty, betrayal, all the things we are now dealing with, are stated clearly in this play. The class struggle is not only in their speech but their garments. It is clear especially with Patrick Page who plays Menenius, a Roman senator and supporter of Coriolanus’s bid for office. With a Southern accent, we know we are in America and the time is now. We have been set in a newly built republic, where treachery is high and sides are divided. This is a black and white society that leads to ultimate destruction. At the center of the plot, like now, is an election that has been extremely volatile and corrupt. Coriolanus (Dion Johnstone), a part of the military machine and Rome’s leading army general who success against various uprisings challenging the government of Rome. Following this success, Coriolanus becomes active in politics and seeks political leadership. He is supported by the upper crust, Sicinius Velutus (Stephen Spinella) and Junius Brutus (Merritt Janson). His temperament is unsuited and he is quickly deposed, whereupon he aligns himself with the enemy, especially the Volscians general Tullus Aufidius (Matthew Amendt) to set matters straight according to his own will. The alliances he forges to accomplish his own will result in his ultimate downfall and death. 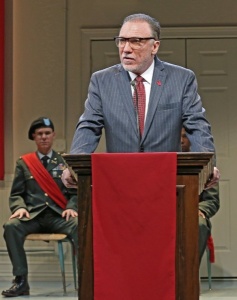 Mr. Johnstone, commands the stage. He has such a powerful dignity, that he makes us hurt in the end. We want this man, not to be betrayed, but to succeed despite his flaws.

The women are who truly succeed in this production. As Coriolanus wife, Virgilia, Rebecca S’Manga Frank brings a somber quality. It is through this quiet that she speaks volumes, but it is New Zealand-born actor Lisa Harrow who truly kept my attention. As Coriolanus domineering mother, Volumnia, her cadence and timber make the words of Shakespeare sing eloquently.

This is a hard show to take for 2 1/2 hours, especially when it is in the news 24/7. Coriolanus blaring shows how we are being victimized into turning against each other for the sake of an election. Maybe in seeing this that will cease and desist.

Suzanna BowlingApril 9, 2021
Read More
Scroll for more
Tap
Stuffed or All Our Hang Ups About Food
Not That Jewish Is The Perfect Hanukkah Gift of Laughter