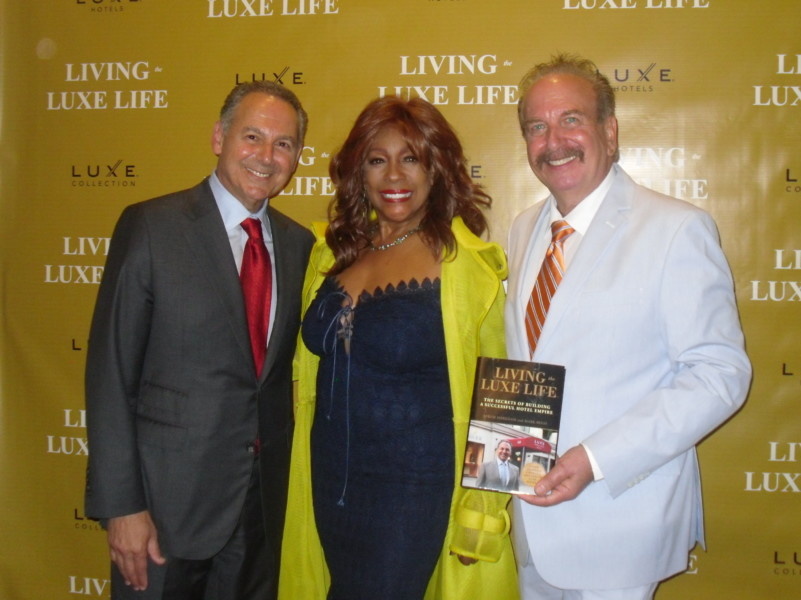 When veteran hotelier Efrem Harkham bought a struggling hotel in Bel Air 31 years ago, little did he know he was launching what would become the Luxe Hotels brand — an international hospitality company. Now, Luxe includes the Luxe Collection Hotels representation company (which is limited to 200 member hotels) and the corporate-owned properties such as Beverly Hills’ Luxe Rodeo Drive Hotel and Bel Air’s Luxe Sunset Boulevard Hotel as well the Luxe City Center Hotel in Los Angeles. Harkham sought to make the brand typify the name Luxe and be synonymous with comfort and refinement — something he hopes to do with the recently acquired Life Hotel in Manhattan.

The company employs over 300 and provides marketing, sales, reservations and other services for hotels in Europe, South America and Asia, as well as North America. As he explained in an accented English voice which mixes a touch of his life growing up in both Australia and Israel, he has a global perspective. “We created an international brand through the Luxe hotel name, like The Rose Garden in Rome. We gave it a face lift and BOOM, The Luxe Rose Garden. When that title enhances an existing hotel, it really serves in the duty of the name. Every state has one of these beautiful hotels. It was my idea that day that I’ve got to find these little boutiques in all these beautiful cities which needs to be granted that name. The idea was born right there.”

But there’s more to Harkham than just hotels. Hospitality isn’t just a job but a way of life for this 60-something. And it’s not just hospitality — it’s a mix of class, euro-styled elegance and a professional thoroughness that underlies his places and his business style. Thanks to years of experience — and through seasoned author Mark Bego’s skills (a New York Times bestseller with 62 books on rock & roll and show business under his belt) — Harkham’s life chronicle, “Living the Luxe Life: The Secrets of Building a Successful Hotel Empire” (Skyhorse), came to fruition as an insightful guide to successes in business and spirit. Through his rags-to-riches memoir, “Living the Luxe Life” details Harkham’s business philosophy, his commitment to excellence in all aspects, how he succeeds in an ever-evolving marketplace, and employee-mentoring. He firmly believes that his methods provides customers with a superior product. Chapters expand on Harkham’s business model, touching on a belief in philanthropy, education, and patience.

And given his less-than-auspicious roots, one wouldn’t have thought hospitality was in the cards. “I was born in Israel. There were several hundred thousand people that arrived within a period of five years. That is a lot of people for a brand new country to absorb. There were food shortages and no housing, we were living in ramshackle camps. We lived in an old British barrack and we just put up walls inside. There were around a hundred thousand people in that area. One thing that we always did was, despite all the squalor, we always celebrated the Jewish holiday Shabbat, and that was a life saver. We brought joy to the squalor and you just work your way out of it by not giving up.”

Born in the Jewish state, Harkham’s religious experience helped defined him and how responded. “I was a very quiet child and I would watch my family sing and celebrate every Friday for the Jewish holidays (day of rest. There are a lot of Jewish holidays! I’m sure living in New York you know. During those years, we were all watching my Dad; my Mom was in a bit of shock, lobbying for us to go to school. We saw kids not having proper education and he lobbied hard for a school for 400 kids. He actually got the funds for a school and had it built for 400 children. He encouraged me and my siblings to help make it happen for the kids and to help them be confident in the world, to be able to find their strength.”

His next stop was even further away from the United States when he acquired Australian roots: “When we arrived in Australia, it was like arriving in Heaven. Oh my God! It is just such a beautiful and peaceful country. My brother was able to secure us a home there before we arrived. I started high school and being an immigrant from Israel was really foreign to the Australian teenagers. I was quiet, shy, introverted, and being the youngest boy in the family, I was passive. Arriving in Australia, I was getting a little chubby from all the good food, so at school I made an effort not to go with the heard mentality. I didn’t want to be like the other guys.”

Though it wouldn’t seem apparent now, Harkham survived his own share of contentious situations, and that taught him a lot. “I was using my ambition and drive to help my parents out of their financial issues. Over the holidays, I worked, I gave them money, they were always short on money. The school’s bully saw the opportunity to poke fun at me. I was the subject of lots of gang outs. I didn’t tell my family about it or my four older brothers. I was too proud to tell them that I was being harassed. I came home with two broken arms and black eyes and they would ask me what happened, and I would say a sports accident. They believed me. This gave me a lot of strength, not to go with the herd and believe that I am okay and that I have a mission to help my parents.”

While growing up in down under, he got his start in business at age 17 in Sydney. He worked as a salesman for Lulu, his older brother’s clothing manufacturing company. Lulu took off after he persuaded a buyer for a large retailer, Rockman’s of Australia, to carry one of the company’s jumpsuits. That achievement led to him establishing a successful track record in the rag trade. And all that drove his move into hospitality. “I felt that that’s why I succeeded in the garment industry. I put myself in my consumers’ shoes, and made sure that they were getting the best product that they could get for what they were spending.”

By selling his share of the clothing business, Harkham used his money to move to Los Angeles in ’78 and invest in commercial real estate, including the struggling Radisson Bel-Air Hotel — now the Luxe Sunset Boulevard Hotel. “I went into hospitality with the same mentality of quality control. I tried being on my own, but I was convinced that it would be useless on my own, that I had to join with a larger entity, which, I did. I joined two international brands and in the process of doing so, sold my profits for even more. And I just went, ‘We’ve won!’ I signed a very long contract, 15 years.

“But after five years, I said ‘Bye Charlie.’ I realized that there were others exactly like me looking for representation and for someone who would help them be found by the consumer. I decided to stop complaining to the branch I hired and mustered the courage to create my own brand and philosophy.“

And that attitude is evident when you walk into any of Harkham’s 100-plus luxury hotels. “I tell my team where ever they are: ‘We all have to lead.’ I expect my staff to look better than I do when I am out there. And they do this 24/7. It’s all about that attention which is personal and genuine. It has to be perfection. It’s a way of life, and we teach it to the staff and executives. We teach it to everyone.”

An example was cited. A woman battling a stubborn cold checked into the Luxe Sunset Boulevard Hotel. Harkham noticed and ordered the restaurant to send her freshly made chicken soup free of charge. It paid off. The guest now returns often and tells her friends about the gesture. He added: “This resulted in a long friendship with the guest, her entire family and work associates.

“We make sure every student employee understands that we want customers for life, not just for one day or one stay. We want them to celebrate their anniversaries or their birthdays with us. So that is the mentality that we’ve engendered at the company.”

Harkham picked another example as to how he acts on his ideas: “When we celebrated Beverly Hills’ 100th birthday, we had a specially baked 4,000-pound cake that had 15,000 slices, and residents flocked to that event. With the hotels we represent, we carefully select properties that have a one-of-a-kind individuality, rarely found among many hotel chains and collections that abound today. Each property has its own distinctive personality and they’re often located near historic sites offering compelling design and unique architectural elements.”

Though he travels regularly, he tries to be home with his kids on weekends. While on the road, he practices yoga and meditation to keep his mind and body fit. “Closing out the world is what it’s about — 15 minutes in the morning and again at night. It helps me maintain my sanity.”

Living in Beverly Hills, he also invested in the local industry — Hollywood’s film business, becoming associate producer for “Gorky Park” a 1983 crime drama starring William Hurt. No doubt he took an interest in this extracurricular activity because his hero is Walt Disney. “Animation was executed by many before him but [Disney] introduced something new. He created magic and made it special — that’s my goal for the hotel industry.”