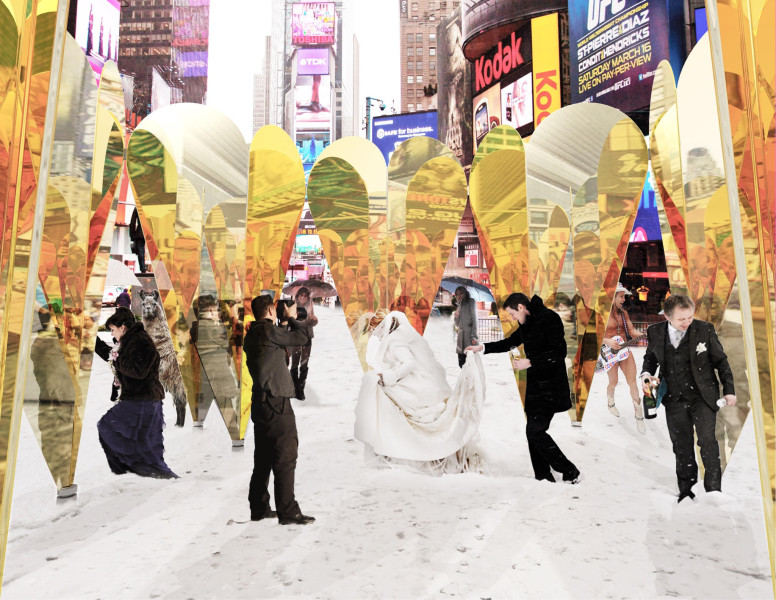 In the Heart of Times Square

In the Heart of Times Square 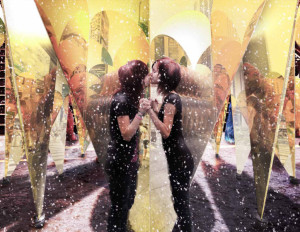 A professor and PhD student from the Department of Architecture are part of a design team that will transform New York City’s Times Square for Valentine’s Day, with a dynamic pavilion of mirrored hearts that will both enclose space and reflect scenes of romantic revelers. 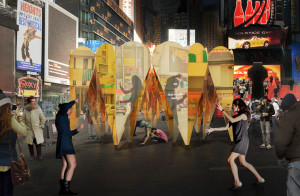 Designed by Collective–LOK, the pavilion — called “Heart of Hearts” — is a faceted ring of golden, mirrored hearts whose interior space will reach 10-feet high and form diamond-shaped “kissing booths” inside each heart. The lovely design was selected as this year’s winner of an annual competition to create a romantic public art installation to celebrate Valentine’s Day in Times Square.

“Heart of Hearts” means that Times Square is the heart of New York City—a blur of bright lights and billboards, noise, steam, passion and possibilities. It is spectacle made manifest, day and night. For Valentine’s Day we offer the Heart of Hearts, a space for both intimacy and performance within this spectacular atmosphere. A faceted ring of nine golden, mirrored hearts creates a pavilion that reflects and multiplies the pulsating activity of Times Square, creating a kaleidoscopic interior that dissolves the boundaries between viewing and performing. Within the ring, diamond-shaped spaces inside each heart create “kissing booths” where couples find their activities mirrored, allowing both privacy and publicity within the Heart of Hearts.

Curated by the Center for Architecture and run by the Times Square Alliance, the Times Square Heart Competition invites proposals from architecture and design firms. “The cacophony of Times Square is a tough place to celebrate the tender passion of Saint Valentine. But Collective–LOK has pulled it off with mirrored golden hearts that create a kaleidoscopic reflection of all who walk through them,” said David Burney, fellow of the American Institute of Architects and interim executive director of the American Institute of Architects New York and Center for Architecture. “It is both a stage and an enclosure — a room-within-the-room of Times Square that will invite participatory celebration of Valentine’s anniversary.”

O’Brien is also a principal at WOJR: Organization for Architecture, an independent design practice in Cambridge, Massachusetts. Kubo co-directs pinkcomma gallery in Boston and is a pre-doctoral fellow at the Center for Advanced Study in the Visual Arts (CASVA) at the National Gallery of Art for 2015-2017.

“We are thrilled to create the Heart of Hearts for Valentine’s Day, an engagement ring for our love affair with the spectacle of Times Square,” the three architects said in a statement. “It’s truly a special opportunity to provide a space for intimacy and performance in the heart of the city, one we hope visitors will love.”

Suzanna BowlingAugust 6, 2022
Read More
Scroll for more
Tap
What Do You Want to Say Good Bye To?
Times Square Gets Confetti Test