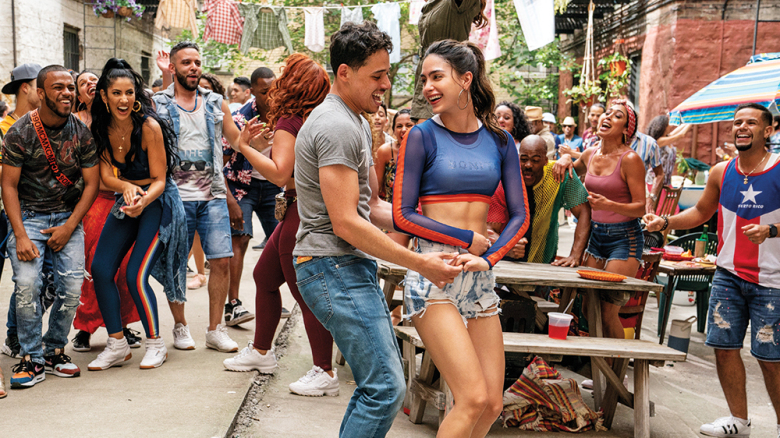 The fact that Lin-Manuel Miranda, Chu and Quiara Alegría Hudes’ In the Heights is not breaking box office numbers says much about the times we are in. This joyous, connected, well done homage to family, community and life is a Valentine of hope. Well received by the critics, this film is not doing well at the box office, or for that matter in numbers of those streaming on HBO Max. Maybe part of that is that Washington Heights is considered more crime ridden than when the show was first written. Or maybe part of this has to do with the black/ white divide that has largely ignored the Latino community. Or Maybe it is the boarder crises that our government is ignoring leaving a horrifying reality? The loss of culture, identity, community, gentrification, and the rights of undocumented immigrants have never been more in jeporday than now. Jon M Chu’s colorful version is an homage and to all of this and more.

This is the story of a block disappearing, so says Usnavi (the charismatic, adorable Anthony Ramos), a bodega operator who longs to follow his father’s dream and go back to the Dominican Republic to buy a bar once owned by his father. He loves Vanessa (Melissa Barrera), a budding fashion designer, who longs to leave the barrio, but feels trapped by her station and Usnavi’s undocumented cousin Sonny (breakout star Gregory Diaz IV),

His best friend Benny (Corey Hawkins) longs for Nina, (Leslie Grace) the first in her family to go to college. Her father (Jimmy Smits) has pinned all his hopes and dreams on her. He is been selling off his business, to the people who are gentrifying the neighborhood.

Daniela (the fabulous Daphne Rubin-Vega) has been forced to relocate her beauty salon to the Bronx due to the rising costs. And then there is Claudia (the heart warming Olga Merediz), the neighborhood’s “abuela.” She keeps this neighborhood together and it is in her passing that Washington Heights looks for a new leader, someone to keep this community alive and remembered.

Weaving through the storyline are musical numbers choreographed by the spectacular Christopher Scott, the Emmy-nominated choreographer best known for his work on “So You Think You Can Dance.”These numbers are spectacular, especially the scene in the club.

In the Heights and Olga Merediz were part of the 13 Tony Award nominations. The show won Best Musical, score, orchestrations and choreography for Andy Blankenbuehler.

In the Heights has been following a countdown to a blackout where people sing about being “powerless.” In all honesty the only powerless thing about this film was Lin-Manuel Miranda’s apology. When you see this film that apology or critique makes no sense. This is diversity, lovingly done with a cast that oozes chemistry and talent.