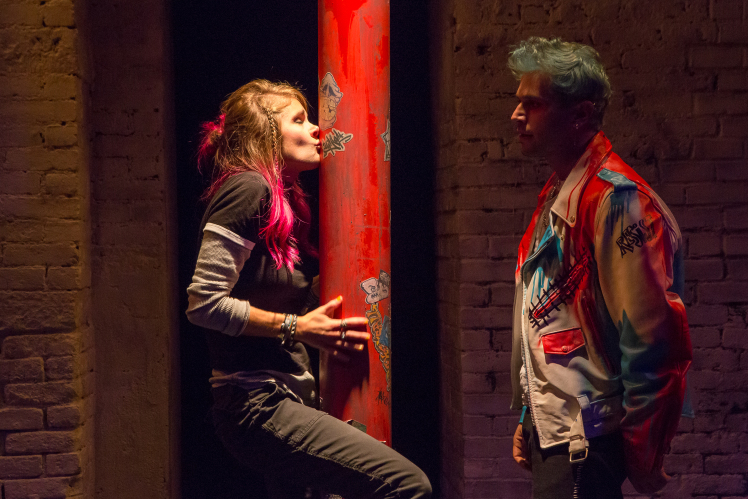 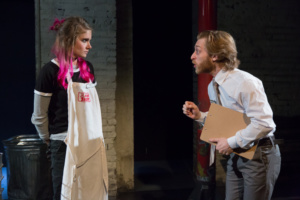 So often we speak of Love as a sign. A sign for something important, a warning, or maybe even an invitation. But what if the sign is exactly that, a sign on a tall metal pole making your heart ache? A hotel sign or maybe a Dairy Queen sign. And what if that sign is the object of sexual desire, adoration, and affection. What if it is true love? Literally. What would people think? How would they make sense of it? What would they try to do? And how would all this be like for the human counterpart? 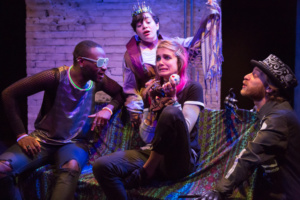 These are some, but definitely not all, the questions that are proposed in The Flea’s first production inside their new and quite beautiful theatre. Inanimate by playwright, Nick Robideau (Pipeline Theatre Company’s Robot Heaven, Title:Point’s The Sampo), dares to challenge us to see past the bizarreness and into the humanity of a love that would have even the most liberal minded scratch their head. The heroine, Erica, played with a jittery intensity by the magnificent Lacy Allen (BOOM’s Thin Mints) is that love/obsessed woman transfixed by Dee, the Dairy Queen sign, humanized in a fun and imaginative performance by Philip Feldman (The Flea’s The Trojan Women). He’s sensual and engaging, and his energy is definitely male so says Erica. They are a match made in the heavenly parking lot, and nothing will come between them. 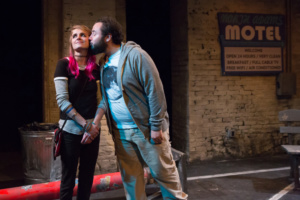 Once she acknowledges to herself that this love is a love worth speaking out loud, everyday objects start conversing with her, quite literally, sometimes loudly, and tonally sexual, talking in a language that is more about passion than words and phrases.  These  objects, such as a teddy bear and a can opener, among other things, are embodied by the flexible and creative team of actors (Artem Kreimer, Nancy Tatiana Quintana, Michael Oloyede) who also do double or triple duty as neighbors, reporters, and other such judgmental residents of this small Massachusetts town that have no problem being as vocal as Erika’s lamp.

And then we have the opposing players in Erika’s world.  Kevin, played mischievously by the very funny Maki Borden (The Flea’s Wolf in the River) is the open minded Dairy Queen almost-manager, who has a not-so-secret crush on Erika. He has been adoring her since high school, slightly based on what appears as her uncaring zen-like approach to the miserable world that surrounds them both.  His love is the more garden variety, but his mind is as open as one could hope. His care for Erika is truly touching as they embark on embracing their own creative ideas of love and affection, listening to their hearts and souls, and forging their own tribe outside of the ‘norm’.

On the other side of the spectrum is her politically minded sister, Trish, played a bit flatly at first by Tressa Preston (TITAN’s Twelfth Night).  Ever since their mother died, Trish has been trying to lead the family into a politically successful position within the community, but Erika’s erratic behavior with canned goods is causing conflict.  It’s a well crafted character that Preston grows into as she struggles to be supportive, caring, and maternal, but can’t seem to see outside of the narrow box of femininity and sexuality.

With a well executed design (scenic: Yu-Hsuan Chen; costume: Sarah Lawrence; lighting: Becky Heisler McCarthy; sound: Megan Culley), Inanimate succeeds in taking us down a very funny and touching road into the real world of Objectum Sexuality (check out their website: http://www.objectum-sexuality.org) that seems perfectly timed in our world’s preoccupation with another’s sexual preferences and/or gender affiliation.  Wonderfully directed by Courtney Ulrich (The Flea’s White Hot, The Feast), we cheer on Erika and her gradually eye-opening and embracing of herself, not as an outsider, but somewhat of a pioneer, braving a new world, with Kevin by her side, standing tall against all those small minds up against her. It’s powerful, exciting, and a whole lot of fun.  Take this review as a sign, to go see Inanimate. But be warned, I will never look at a can opener again in the same casual way….

On The Shore of the Wide World: Coping & Watching but Not Diving In
Alan Campbell and George Wendt Lead Cast In Rock and Roll Man:The Alan Freed Story