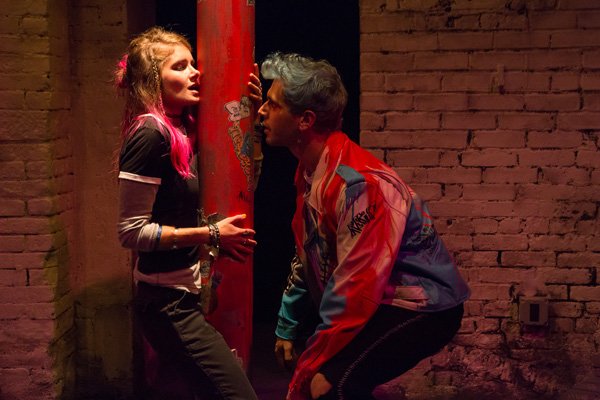 Inanimate at the Flea Brings Life to the Stage

Inanimate at the Flea Brings Life to the Stage 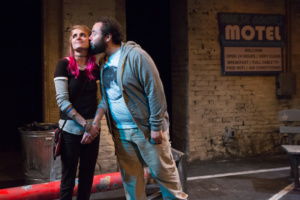 Lacy Allen and Maki Borden. All Photos by Hunter Canning

If you thought going to the theatre to see a play about a young woman who falls in love with a giant Dairy Queen sign was strange, you’d be right. That doesn’t mean it’s not worth it. Nick Robideau’s play Inanimate, premiering at the new Flea Theater, is full of heart, compassion, and just enough inappropriate sexual innuendos. This story could have gotten way out of hand, but The Flea’s team handled it just right.

Directed by Courtney Ulrich, Inanimate tells the story of 30-year-old Erica (Lacy Allen), who happens to be an objectum-sexual: someone who is sexually and emotionally attracted to inanimate objects. Erica is in love with Dee (Philip Feldman), her local Dairy Queen sign, though they never discussed exclusivity and she has a few flings with her bedroom lamp (Artem Kreimer), childhood teddy bear (Nancy Tatiana Quintana), and a leather studded can opener (Michael Oloyede). While her politically-motivated sister Trish (Tressa Preston) follows in their mother’s footsteps and vies for the towns approval to rebuild the downtown, Erica tries to hide her relationship, going as far as to lie about dating her new friend Kevin (Maki Borden), who has his own sexual deviances. Balancing her life between time spent with her loved ones and time spent with her loved things, Erica struggles to find her voice, her people, and ultimately acceptance, not only for herself but for those who cannot accept her.

Lacy Allen shines as the awkward woman who doesn’t understand why she feels the way she feels. Her portrayal helps the audience place themselves in her shoes, learning about this new frontier in sexual drive along with her. Maki Borden steals the scene every time he is on stage with his presence and genuine comedic appeal. The two play very well together. The rest of the cast dig deep for their inanimate characters, giving playful, lovable voices to the otherwise silent objects.

Nick Robideau’s script is clean and fun. A bit long – a few monologues could be cut down a little so the audience doesn’t check out for a moment – but the subject is very well handled. Inanimate doesn’t aim to preach the next sexual identity fighting for equality, it just announces its unapologetic existence.

In a time where everyone is fighting for their voice to be heard, this new one doesn’t scream in your face, but that doesn’t mean you won’t hear it. Inanimate pulls you in from the first moment, even if it is just so you can figure out why the hell that girl is humping a giant pole.

Inanimate at The Flea Theater, 20 Thomas Street, through September 24th.