Incident at Vichy We Do Not Learn 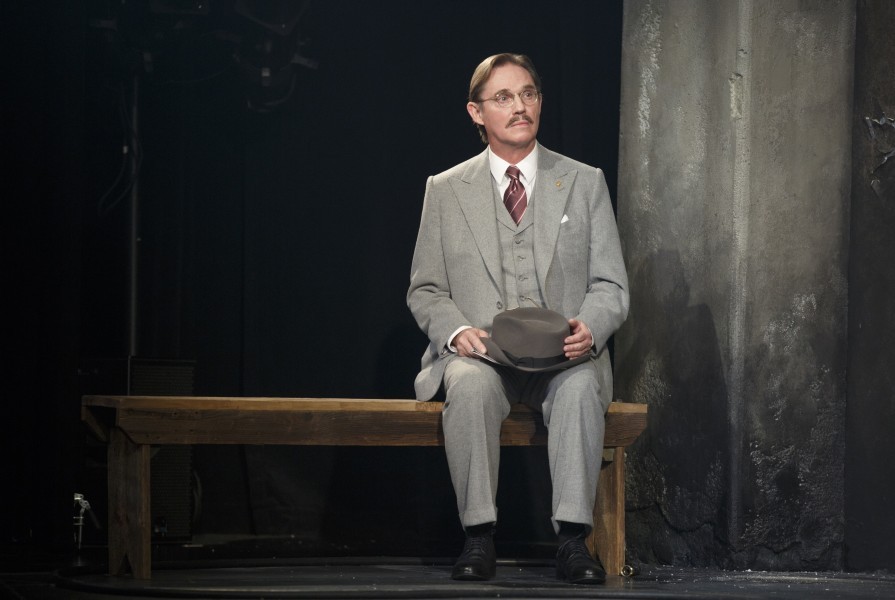 Incident at Vichy We Do Not Learn

“There are no persons anymore.”

Arthur Miller’s Incident at Vichy first premiered in 1964. The last revival was well done in 2009 by TACT (The Actors Company Theatre). Now director Michael Wilson’s brings to the Signature Theatre a production where Richard Thomas shines as the Austrian Aristocrat who knows more than he wants and sees the world he loved disappearing. 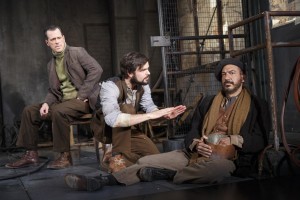 The play begins in September 1942 as seven men have been randomly collected and detained. One is a gypsy (Evan Zes), but the others may or may not be “Peruvians” (Jewish). The cast of characters are Lebeau (Jonny Orsini), a starving painter whose nose was measured by the German professor (Brian Cross), who proudly announces that his specialty is “racial anthropology.” Lebeau is frightened that they are hear for ominous reasons and questions Bayard (Alex Morf), an communist electrician who warns about trains going to Nazi concentration camps in Germany and Poland and reports of mass killings. Marchand (John Procaccino), a wealthy businessman who states: “It must be a routine document check.” Monceau (Derek Smith), an actor who is in a state of denial of why he has been detained. The waiter (David Abeles) who has heard the implementation of “racial laws,” and thinks the major (James Carpinello) whom he waits on will go kindly. The boy (Jonathan Gordon) who went outside to help his family thinks his age will save him. 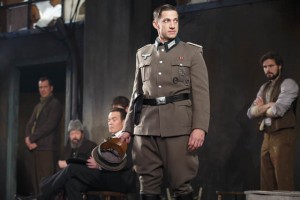 As Marchand goes first and is allowed to leave hope soars until a very Jewish pious, old man (Jonathan Hadary), Leduc (Darren Pettie), a psychiatrist who studied in Vienna and Austrian nobleman Von Berg (Richard Thomas)—are brought in faith, victimization, escape, humanity, denial, guilt and responsibility are discussed. Argued and make for a ending that offers hope and a stark truth that can not be denied.

The most poignant moments are when Leduc tries to persuade the Major who has a moral disgust to what is happening to let them go free. The Major feels human beings have become insignificant and wants to make one human being more worthy than another. When the Austrian prince, who despises the Nazis for their “vulgarity,” and the intellectual Leduc are the last two to be examined responsibility comes into play.

There is a lot to praise in this production and a lot of curious casting and design issues. Except for the old man, nobody looks Jewish, German and Austrian yes, but not Jewish.

“Jew is only the name we give to that stranger. Each man has his Jew; it is the other. And the Jews have their Jews.”

Michael Wilson’s unhurried, suitably suspenseful staging—set within the dank surroundings of the Vichy holding quarters, designed by Jeff Cowie and lit by David Lander to emphasize its squalid atmosphere—allows the characters to come into focus and for their respective points of view to be aired. Still, despite their convictions, fears, and occasional outbursts, it’s hard to avoid the faint smell of greasepaint rather than the stink of humanity wafting toward us; everyone’s a theatrical construct, a mouthpiece for an idea or attitude, speaking dialogue that’s often clouded and stiff.

No one, though, seems in the least European—a problem perhaps insurmountable when an American creates an entire cast of European roles to be acted by Americans. Even casting an actor with a small nose as the one who gets measured draws attention to the difficulty. Given the noteworthy proboscises on many Frenchmen, it’s a wonder Charles de Gaulle wasn’t mistaken for the Grand Rabbi of Free France.