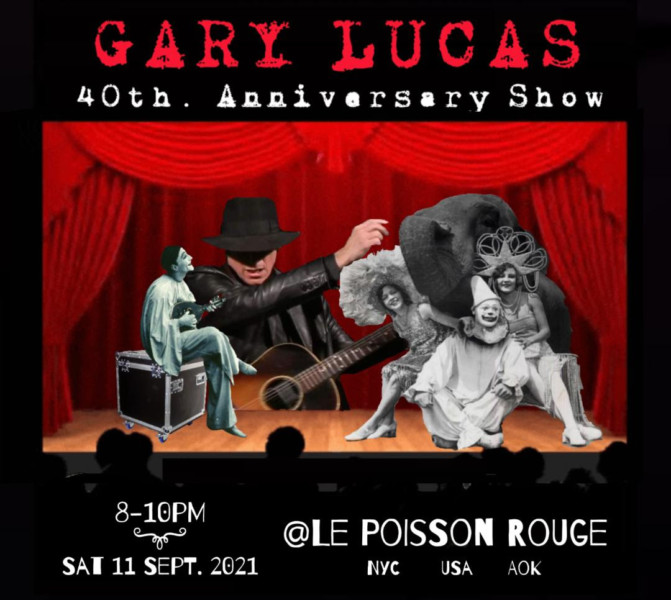 I’m always happy to exploit a chance to tout the virtues of the late musical game-changer, Captain Beefheart (Don Van Vliet). Being in his Magic Band was a feather in the cap for any musician. So, not only did the fantastic guitarist Gary Lucas play in his band for the latter part of its history, but he also served as Beefheart’s manager and press liaison in the ’80s. Quite a transition from doing marketing for a major label such as Columbia, it demonstrated Lucas’ versatility in art and in life.

Beefheart created music that not only influences bands to this day, but is still difficult to affix any label to it. Part atonal avant-garde music mixed with jazz and blues, it takes a dexterous player to perform his complex pieces. Having been called, “One of the 100 Greatest Living Guitarists” by Classic Rock Magazine, Lucas was up to the task — and to this day keeps Beefheart’s musical legacy alive through shows and recordings.

But he not only contended with Beefheart, he grappled with the late singer/songwriter Jeff Buckley and his emotionally trying life which ended far too early in an accidental drowning. In mid-1991, Buckley began co-writing with Lucas resulting in the songs “Grace” and “Mojo Pin” and by late ’91 began performing with Lucas’ band Gods and Monsters around New York City. The day after they officially debuted in March 1992, Buckley left the band.

Wrangling with complex music and people has marked his long career which included a constant travel schedule until the lockdown. In order to keep out there and keep his fans happy, Lucas did regular live performances on Facebook throughout.

In addition, a new recording came out this July, “Le Beast Concrète” — a collaboration with multi-genre producer David Sisko. Mixing Lucas’ guitar (both from studio and field recordings) and Sisko’s electronics, synthesis & beats, it can be considered a “genre-fluid” mix of blues, rock, dance, trap and avant-garde sounds.

Now decades later, this Grammy-nominated guitarist/songwriter/composer is celebrating his 40 years of creative work. Lucas has released over 35 albums as a leader in multiple genres including jazz, rock, avant-garde, world, classical, folk and electronica. In addition and played on countless others. The 60-something has performed in 40-plus countries including China, Russia, India. Japan, Australia, Mexico, Brazil, Cuba, and all over Eastern and Western Europe. But this former Syracuse native makes his home in NYC for many years and reflects the city’s diversity as well.

So when a label decided to release a extended overview of his career it’s no wonder that Lucas’s new retrospective double album “The Essential Gary Lucas” (Knitting Factory Records) — spans over 40 years of music running at 160 minutes . This release includes 12 rare and unreleased tracks and continues to receive excellent reviews and airplay internationally. The physical CD is now in its second pressing.

With that in mind, this acclaimed guitarist, songwriter and composer answered a few questions about his up-coming performance on 9/11.

Q: how do you select the material from over four decades of work to perform live? How did you change things up?

GL: I chose some songs I haven’t played in years with the guys, like “Jedwabne:”– and some I know the audience wants to hear, like “Grace.”

I tried to select some cool music from all phases of my 40 year career—but of course, having put over 35 albums out to date, there’s going to be something missing for some of my fans I’m sure

Q: Can you mention some songs and their significance?

GL: “Jedwabne” is a song about an infamous pogrom against the Jewish community in July 1941 in a little town in Poland where my relatives on my mother’s side came from. I wanted to commemorate this event as it has been a controversial subject in Poland since a book came about by Professor Jan Gross titled “Neighbors” which looked into this incident deeply—and discovered that many of the non-Jewish neighbors of the Jews incinerated in the Jedwabne community were all too willing and complicit in this pogrom, which took place under German occupation.

I attended an official government apology ceremony in July 2001 held in Jedwabne —and was motivated to commemorate the event in that song, which was on the last studio Gods and Monsters album “The Ordeal of Civility.”

Since then they’ve passed laws in Poland making it a crime to speak about the Holocaust in connection with any possibility of Polish people sharing responsibility for this atrocity, which is patent nonsense. The government there even tried to rescind numerous prizes awarded to Prof. Gross for his research, in fact. Orwellian is not quite the word for this. I thought it was important to commemorate the story of Jedwabne in song, and thus have brought it back for this 40th anniversary show,

Another important song is “Lady of Shalott.” The lyrics to this are by the UK expat writer David Dalton, who has written some excellent biographies of James Dean, Marianne Faithfull and others Many years ago we were introduced by the late Steve Paul (founder of the legendary 60’s club The Scene in NYC amongst other things). David’s best friend is Marianne Faithfull, and he approached me about putting music to lyrics he had written for her to sing—a kind of gloss on Alfred Lord Tennyson’s famous poem “The Lady of Shalott.” which is based on Arthurian legend.

I found his lyrics haunting and came up with what I think is appropriately haunting music. I demoed it up and Steve presented it to Marianne, who said it wasn’t in her key! A good song is a good song, so I decided to adapt this for my group, and revised the personal pronouns in some of the lyrics but essentially left them alone. One of the rare instances when I let someone else’s lyrics come first to drive the songwriting process!

When Jeff Buckley and I worked together, I would always come up with the music first, then pass it on to him to put lyrics and a vocal melody to. I think the song came out great and I am happy to perform it again in this show!

It will be about 50% composed and 50% improvised music.

GL: Yes absolutely—only he was allowed to improvise.

I recall that when we played this incredible show at the Beacon Theater in Nov. 1980 with James Blood Ulmer opening, my friend, the saxophonist Tim Berne came up to me and said, “I could never play the same parts every night like you guys did.”

He was referring to the fact that the only improv allowed on the gig was by Don Van Vliet himself. I told Tim that it didn’t bother me, as it was total ecstasy playing Don’s music.

In that, it was like modern classical music. You had to adhere to the parts or the whole thing would have collapsed. What sounds like random playing on the part of the band in spots was all meticulously rehearsed and worked out,

Q: Of course working with the Captain was enough to establish you in history. Every time I listen to him I hear something new. Is that the same for you when you play his music? What is it that drove you to want to work with him?

GL: Yes Don was a staggeringly powerful artist and I found his overall presence overwhelming. When I met Don I was ready for magic in my life; everything seemed very flat and boring at that time. After seeing his debut show in NYC I knew I had found it.

Q: You’ve written much about Jeff Buckley is there anything about Jeff that you want to add or summarize?

Jeff was the most gifted all-round musician I ever met and collaborated with. I can’t praise his musical ability enough. I feel really blessed to have worked with him.

GL: When Jeff died the world lost a rare treasure. An artist of that quality doesn’t come along, maybe only once in a generation. Personally I was devastated by both the loss of a friend and the greatest collaborator I’ve ever known.

Q: You’ve worked with such amazing people as Don and Jeff –do you there is something in common with these artists and you?

GL: Yes, I have been blessed to work with some of the creme de la creme of modern musical artists. I think they recognized a simpatico sensibility and sensitivity in me as a player and collaborator that made for mutual attraction– what can I say:?

Q: What are your goals as far as writing and playing music for folks around the world?

GL: I think wherever I go in the world (and I’ve traveled and played in over 40 countries to date, including Russia, China, Japan, South Korea, India, Australia, Cuba, Jamaica, Mexico, Scandinavia, Israel, Serbia, all over Eastern and Western Europe, Brazil, Colombia , Morocco, Canada and of course the US) I meet bored people looking for something different, something special, something that will bring a sense of wonder into their lives. And I aim to provide that experience as best I can with my guitar playing—which leans heavily on the blues, which I find to be universal—everybody feels pain and everyone experiences joy (another kind of blues) in their lives.

But beyond that I try to bring the X-Factor into my playing  in ways designed to elevate, comfort, astonish and delight—to provoke the response “I never heard such music played like that before”. That’s my mission.

For more information go to: http://www.garylucas.com

Suzanna BowlingFebruary 2, 2023
Read More
Scroll for more
Tap
Details and Talent For Curtain Up! A Three-Day Outdoor Experience in Times Square With Twenty-Two Star-Studded Events
Bonnie Milligan Gets Happy at Feinstein’s/54 Below