I am a big fan of director Will Davis and of playwright Jaclyn Backhaus who directed and wrote the fabulous Men in Boats. This time, Backhaus and Davis have collaborated on India Pale Ale. This play won the Horton Foote Prize for promising new American play, which seeks to examine racial stereotypes. We follow a Punjabi family, who have lived in Raymond, Wisconsin for a while. We first meet Basminder (Shazi Raja), known to everyone as “Boz”, who longs to move an hour away and open a bar in Madison. Her ancestor was Brownbeard, a beer-running pirate, and she longs to be like him, but the question is why and why so much yo ho ho ho? 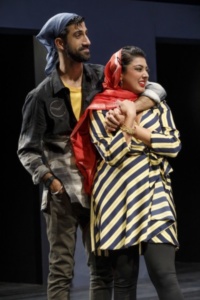 The community is celebrating the upcoming wedding of Iggy (Sathya Sridharan) to his fiancée, Lovi (Lipica Shah). As they prepare for the gathering, Iggy has invited Boz’s ex-boyfriend and his best friend, Vishal (Nik Sadhnani), without telling Boz. Boz and Iggy’s parents, Deepa (Purva Bedi) and Sunny (Alok Tewari), grandmother, Dadi (Sophia Mahmud), and Deepa’s cousin, Simran (Angel Desai), are also there. Boz, during the festivities, announces that she is leaving. 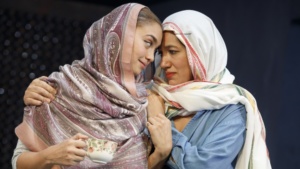 We next see Boz at her bar. She starts to meet Tim (Nate Miller), a beer-loving, white college student. Boz is interrupted by Vishal, who has come to fetch her. There has been a shooting.

In Act 2, we are in a surreal pirate world where pirate lingo makes the whole sequence just seem out of place. We then get back to the shooting, which was based on a real event back in 2012. The event changes the lives of everyone, which is natural. Tim comes to Boz’s home to return the keys to the bar to her, which she gave basically to a stranger. Tim tells the group he would like to know more about the Punjabi community.

Sadly, this play fails in the first act and doesn’t make its point of peace, love, and tolerance until the last 20 minutes. The treats to share were as delicious as the message.

The direction and the pirate aspect are just too quirky. The language disjointed. The acting uneven.

However, the last 20 minutes made me want to see this play developed more and really fleshed out, especially after Saturday’s shooting.

TDF Awarded $100,000 For The Veterans Theatregoing Program With Send NYC Vets to Broadway Shows
Melissa Errico Sings With So Little To be Sure Of