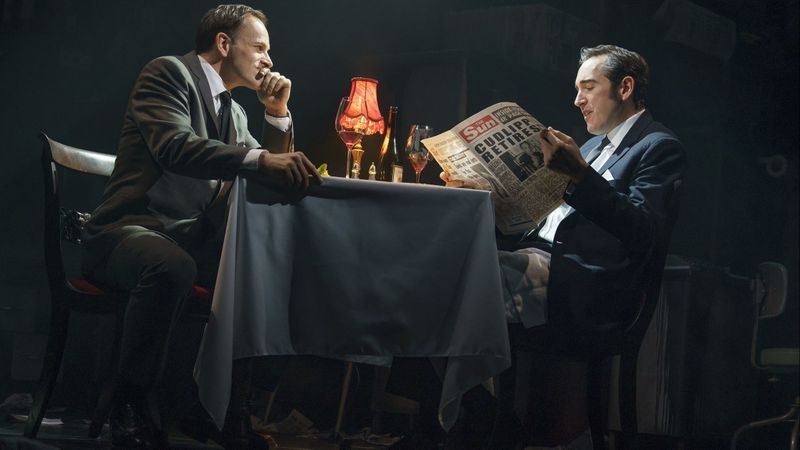 James Graham’s Ink takes on the beginning of Rupert Murdoch’s reign, as he and The Sun editor Larry Lamb reshaped British tabloid journalism. This British import brought to us by Manhattan Theatre Club, takes on a political view point of dissecting a British institution, the press.

We go back to 1969, when Murdoch (Bertie Carvel) an Australian businessman bought his way into the British newspaper world with his acquisition of failing broadsheet The Sun. We start with that purchase to the newspaper’s first birthday as a radical tabloid, with its editor Larry Lamb (Jonny Lee Miller) setting out to wrestle leadership from the top dog in town The Mirror.

Lamb states the 5 W’s of journalism — who, what, where, when and why — and why the “why” isn’t important. “Once you know ‘why’ something happened,” says Lamb, the story’s over. So The Sun uses sex, gossip, and “free stuff,” to increase sales. The more garish and brash, the better.

This play is done with slick direction by Rupert Goold, who choreographs with a deft hand. He moves his excellent ensemble in a constant state of motion up, down and around a gravity-defying pyramid of heavy metal desks office desks, file cabinets, swivel chairs and typewriters done with aplomb by Bunny Christie. Neil Austin’s lighting keeps things in a haze of cigarettes that you know are being smoked by the carton. When ever the staff of The Sun hits a goal a song and dance breaks out. It is truly the direction that makes this play.

The play starts to die down in the second act if you know the story of how Lamb exploited the kidnapping of a colleague’s wife, to her demise. The best scene however is when Lamb persuades Stephanie Rahnl (Rana Ray), a German model to appear naked in the newspaper. It is subtle, intimate and shows how deals with the devil are made and the consequences.

In the end the Mirror editor Hugh Cudlipp (Michael Siberry) becomes a man no longer in touch with his readership. And Lamb and Murdoch move on from their diabolical pact.

Bertie Carvel nails Murdoch and he is fascinating to watch. Miller, lets us see his demise from respected journalist who’s finiacial status would never let him move beyond his means, to the publisher of a top rated tabloid, to being remembered for putting nude girls on page 3. The rest of the cast is at the top of their game bringing in banner performances.

Gossip sells as does Ink , as it just announced its 3rd extension. Tony nominated for Best Play, Director, Supporting Actor, Set, Lights and Sound Design this is show that’s made its mark.