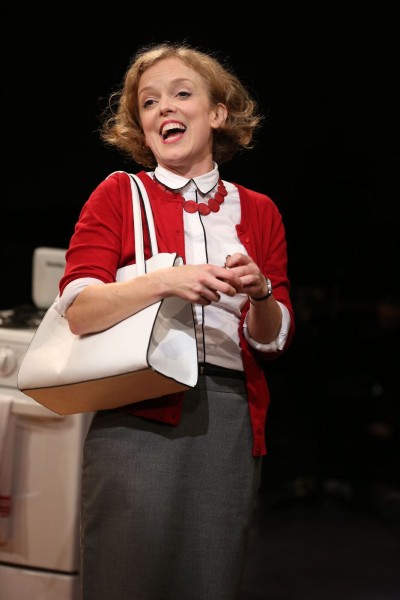 Inner Voices is a musical theater trilogy each coming in at over 35 minutes. Each of the three intimate musical shorts was commissioned by Premieres for the fifth installment of the biannual series. These monologues were based on Friendship, fear and fantasy in other words the human condition. 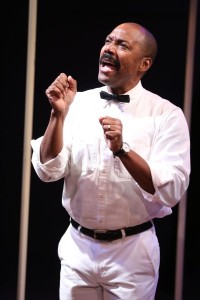 The first piece was set in a nursing home in a small-town in Arkansas, time period 1961. Here Benny (T. Oliver Reid) the orderly is recalling the tale of Just One “Q” the story of Bertha and Julynne. Due to a man the two are bitter enemies. One his wife who he left with 11 kids to feed and one his much younger lover. Bertha and Julynne duke it out over a game of Scrabble, with the “Q” deciding the winner. Benny, seeks to bring about a amicable parting but he “Can’t get these hearts to unlock.” In the end communication allows each to see the others side and realize there is more than one side to a story.

T. Oliver Reid is wonderful in the role, singing this role to perfection. Ellen Fitzhugh’s book is complicated and I could see this being developed into a much longer piece with more than just one actor. The nice thing was Ms. Fitzhugh’s lyrics were intelligent and clever. Ted Shen’s music was syncopated, with jazz and melodies over tones.  Through Brad Rouse’s direction we knew who each of these characters were. Andrew Resnick’s musical direction and orchestrations of Ted Shen’s rhythmic score made me want to see what else we can see from this harmonic duo. Mary Ann McSweeney on bass and Harry Hassell on reeds completed this musical  journey. 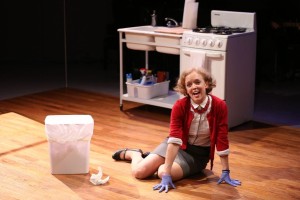 The next piece was so interesting, as it showed the painful existence of somebody with Mysophobia (The excessive fear of germs) combined with OCD (obsessive-compulsive disorder). Dan Collins’s characterization of a women who finds a unwanted and unknown pen in her purse and the constant struggle to stay on track is painfully and sensitively sung and portrayed by Nancy Anderson in The Pen. Margot Bordelon’s direction keeps Laura (Ms. Anderson) from going off the deep end and has us sympathizing with her debilitating disease. Laura has lost jobs, has no friends and no life due to the psychological issues from which set her off. We met her as she is getting ready to leave and she can’t find her keys. In the search she finds a bitten unknown purple pen. She deals with this with alarm, cheerfulness, humor hysteria, panic and pain. We learn has these episodes began and what triggers them. An score by Julianne Wick Davis is like Floyd Collins, Sondheim and Bernstein and it soars. Musical director and pianist Alexander Rovang is well done and the orchestrations by Davis and musicians Tom Monkell and Dan Erben was genius by adding the electric guitar to the mix. I would have liked to hear more lower register from Ms. Anderson in the beginning to keep the craziness for later. Ms. Anderson has such a thrilling soprano it sometimes seems shrill though it really is not. I would add more warmth to the voice in the beginning, thought Ms. Andserson’s performance was truly engulfing. The piece as a single monologue needs to be slightly rearranged to make the storyline clearer and cut out some of the repetitiveness from the piece. I can see this piece paired with three others, two more phobia’s and the three getting together with 4 different musical stylings blending. This is a piece that could have an impact. 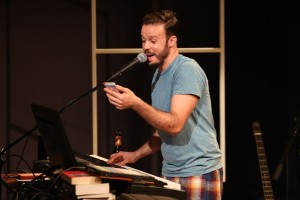 The third piece belongs in a east village theatre or Joe’s Pub and is not my style. The Booty Call, with music and words by Michael Thurber, and words and direction by Saheem Ali is so indi young. Thurber plays Gabe, a single young singer/songwriter who can not connect. He is so afraid of not being able to perform that he keeps women at a distance. He has recently met a girl he would like to start a relationship with but he has cooled off taking to her. Not taking no for an answer the girls keeps texting and interrupted while he is recording his new album. He has had a series of can’t get it up for you calls and we get to hear all about them. His reasoning for not being able to perform is he wants a long term romance and it just didn’t feel right. Once sentiment but seriously I don’t like sitting through people’s therapy.

Thurber channels through performing live on synth, percussion, and bass, singing and rapping to the rhythms he creates all of which are tuneless.

If you love musical theatre and are looking to find the next Lin Manuel Miranda, Stephen Sondheim or Jason Robert Brown, look  no further.

G. H. HARDINGMay 11, 2022
Read More
Scroll for more
Tap
Chris Gethard: Career Suicide Is An Appropriate Name
From Chicago to Dancing With The Stars John O’Hurley is A Man With Standards at Feinstein’s/54 Below