Inside the Chita Rivera Awards: The Interviews and Show 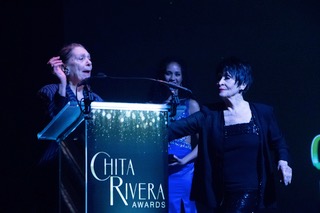 Inside the Chita Rivera Awards: The Interviews and Show

Hosted by Ann Reinking and Ben Vereen The Chita Rivera Awards was filled with community and love.

The Radio City Rockette’s kicked off the night with a rousing version of “New York New York”.

Joe Lantanteri who started it all spoke as the cast of Smokey Joe’s Café performed “On Broadway”.

Luann DeLesseps, Marilu Henner and Ethan Slater presented the Off Broadway Awards to:

Outstanding Female Dancer Off Broadway: Irina Dvorovenko, The Beast in the Jungle

Angie Schworer gave us some “Zazz” from The Prom.

Michael Riedel presented the awards to ………….

Damon J. Gillespie and Michaela Dimond talked about Flody Suarez, Jeffrey Seller, and Cher (producers of The Cher Show) who were honored with the Ambassador for the Arts Award honoring their contribution to the convergence of theater, film, and television. The award was given out by Andy Blankenbuehler.

Richard Thomas talked about the Douglas and Ethel Watts Critics Choice Award as LeeRoy Reams and Patricia Watts presented it to it to Faye Driscoll.

Curtis Holland proved he had the steps when he tapped his toes off to “I’m Just Wild About Harry” from Shuffle Along.

A heartfelt “Wheels Of A Dream” from Ragtime brought husband and wife Brian Stokes Mitchell and Allison Tucker to the stage.

Mary Testa and Chita who slinkily did a tango to the podium gave dancer, choreographer and theater director Graciela Daniele the third annual Lifetime Achievement Award.

The final awards of the night were given out to….

Outstanding Male Dancer in a Broadway Show: Ephraim Sykes, Ain’t Too Proud – The Life and Times of The Temptations

Outstanding Female Dancer in a Broadway Show: A tie for Ashley Blair Fitzgerald, The Cher Show and Gabrielle Hamilton, Oklahoma!

all video shot by Brian Hester