Inspiration From Kristin Chenoweth, The Moms and Breast Cancer Survivors

Inspiration From Kristin Chenoweth, The Moms and Breast Cancer Survivors 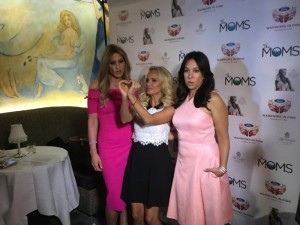 What a way to start a day. This morning “The MOMS” Denise Albert and Melissa Musen Gerstein along with award-winning actress and singer Kristin Chenoweth hosted a MAMARAZZI® event at the Carlyle Hotel. The event was sponsored by breast cancer support initiative Warriors in Pink and powered by Ford.

T2C is doing a series of articles based on today’s amazing and supportive event. In this room full of miraculous women, it put the political chaos into perspective. I think if you told anybody in that room that someone else in that room needed their help, you would have seen the whole room come together.

Through the Warriors in Pink program, Ford is committed to helping those touched by breast cancer and has dedicated $130M to research, education and support services. Warriors in Pink (#WarriorsInPinkMOMS) also empowers people to take real action to help those battling the disease through the More Good Days initiative (#MoreGoodDays), which launched in 2015 to help lessen the burden on those living with breast cancer and bring them what they ultimately deserve – more good days. 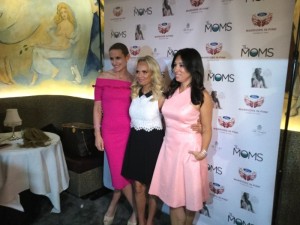 The MAMARAZZI® event is part of Breast Cancer Awareness Month, with Denise Albert and Melissa Musen Gerstein helping to raise awareness about how to bring More Good Days to those living with breast cancer. What I did not know was that Denise, is currently undergoing treatment for breast cancer. Alongside her friend and business partner, Melissa, can offer insights from first-hand experience into dealing with the everyday challenges of fighting breast cancer and finding the strength within to continue the fight.

Ford’s commitment in the fight against breast cancer runs well beyond raising funds. The company is dedicated to making a difference 365 days a year by encouraging women to become informed and visit their doctors, educating them about how early detection saves lives. To date, Ford has dedicated more than $130 million to the cause. The entire 2016 Ford Warriors in Pink collection is available at www.fordcares.com. A full 100 percent of net proceeds from sales go to support organizations fighting breast cancer including The Pink Fund, Susan G. Komen, Dr. Susan Love Research Foundation and Young Survival Coalition.

Emmy and Tony Award winning actress and singer Kristin Chenoweth’s career spans film, television, voiceover and stage. In 2015, Chenoweth received a coveted star on The Hollywood Walk of Fame. In 2009, she received an Emmy Award for Best Supporting Actress in a Comedy Series for her role in “Pushing Daises.” In 1999, she won a Tony Award for “You’re A Good Man, Charlie Brown” and she was also nominated for her original role of Glinda the Good Witch in “Wicked” in 2004. Chenoweth has been nominated for two Emmy Awards and for a People’s Choice Award for her role on “Glee.” In 2009, she wrote an uplifting candid, comedic chronicle of her life so far, “A Little Bit Wicked,” which debuted on the New York Times Hardcover Non Fiction Best Seller List. On September 23, Chenoweth will release “The Art of Elegance,” her first album of American Songbook classics via Concord Records. In November, she will return to the stage in MY LOVE LETTER TO BROADWAY, a limited engagement at the Lunt-Fontanne Theatre. In 2017, Chenoweth will reunite with executive producer Bryan Fuller in his upcoming Starz series “American Gods,” in the role of Easter. For more information about Kristin Chenoweth, visit: http://www.officialkristinchenoweth.com/ Facebook: kristinchenoweth| Instagram: kchenoweth| Twitter: @KChenoweth