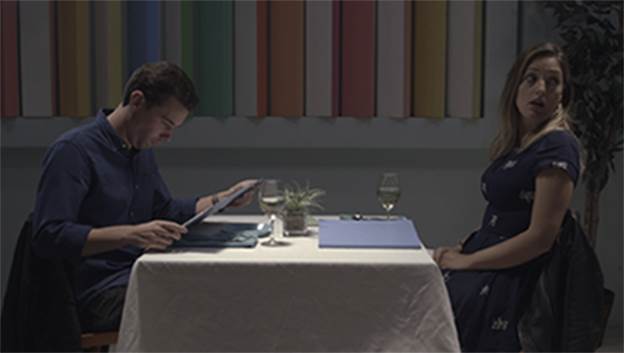 Audiences from New York Film Festival were invited to experience four interactive shorts for the new entertainment platform for interactive storytelling, Eko: The Gleam, an interactive documentary about a small town paper; Ticking Bomb where two men’s paths violently collide; That Moment When, a comedy that asks the viewer to navigate a battery of awkward conversations; and Now/Then, a Rashomon-inspired story focused on the various perspectives swirling around a relationship on the rocks.

By Daniel Scheinert and Billy Chew

​Created by Daniel Scheinert (Swiss Army Man, Possibilia) and Billy Chew, The Gleam is an interactive documentary film ​that ​explores the town of Guntersville, Alabama through ​its ​local newspaper​, The Advertiser-Gleam. Encounters with the town’s vibrant personalities and events are presented within the documentary’s mosaic format, which gives each viewer a personal and insightful look into this community.

Set to Aloe Blacc’s harrowing song, Ticking Bomb presents two parallel worlds focused on two men. Their paths collide in a volatile encounter that triggers irreversible consequences for them both. This interactive experience allows you to switch between the perspective of the two characters as well as actors, revealing that the differences between class, race, good and evil are not as clear as we imagined.

Uncover for yourself the conflicting memories and unreliable interpretations of events leading to a couple’s breakup. Then/Now is a scripted narrative that presents multiple perspectives of a relationship. It’s up to you to piece together these fragments in order to gain a broader understanding of their disputed past.

We’ve all been there: you’re at a party speaking with someone who seems to know you and you think you know them but just can’t remember his name. Starring Milana Vayntrub, That Moment When is a short-form comedy where you will need to help Jill remember her friend’s name or risk her looking like a self-centered jerk.

ABOUT INTERLUDE AND EKO: Interlude (www.interlude.fm) is a media and technology company that empowers deep emotional bonds between storytellers and consumers through a new medium that lets people shape the story as it’s being told.  The company’s patented technology forms the basis of its consumer platform, Eko, enabling the creation and delivery of stories told in live action video that allow viewers to step into the story.  In an Eko video, the story, in effect, listens and can adapt in a multitude of ways as it unfolds.

Interlude partners with entertainment companies, independent creators, and top brands to create episodic series that are distributed on the Eko platform through a network of affiliates on the mobile web, mobile apps, and the web. Interlude investors include Sequoia Capital, NEA, Marker, and Innovation Endeavors.  Strategic investors in addition to Sony, include MGM, Intel Capital, Warner Music Group and Samsung. For more information, please visit: HelloEko.com

Comic Con Held Many Surprises With Matt Damon, The Walking Dead and The Defenders
Fall Fabulous for the Active Outdoors