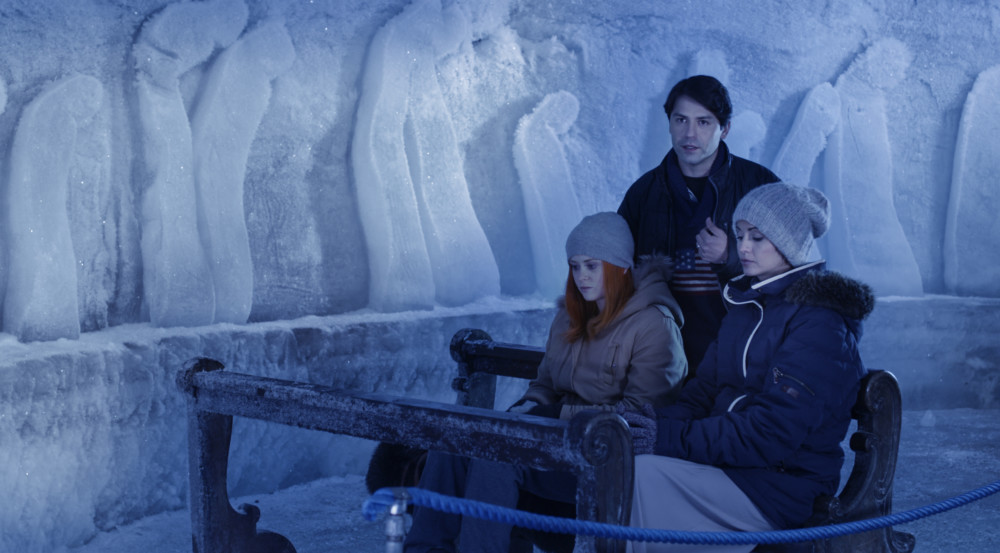 Besides making Half Brothers in English, Christoph also had a clear idea of how polished he wanted his first feature to look. As a result post production for the film took about two years.

Christoph: “A lot of independent movies just look terrible. I think people are used to Hollywood. They are used to high glossy pictures, and if you don’t deliver high glossy pictures – no matter what type of story you have: it can be a really touching or a message never told before – you won’t get an audience. For some reason you get an audience with a story that doesn’t matter to anyone but it looks great and people like it. So I wanted this movie to look good. I wanted this beautiful landscape; I wanted to have a good sound mix; I wanted to have good music. It should appear in a very high-gloss, professional way and not in a low budget way. I spent a lot of time and money on this, and I think that is something we made, I think we got that.

Maybe in terms of being a storyteller filmmaker, it would’ve been better to go a different way – not to go for the high glossy but to go for the story – maybe that would’ve been better for my career but when I look back I had to make a decision at some point. I think I would make the same decision. I would do it the same way, because I can show now that I can establish moods. My credit is the director’s one and not the screenwriter’s one. I hope that people enjoy the movie very much because at the mid-point somewhere, the tonality changes. It starts getting strange.

The first 30-40 minutes are very polite and good looking. The characters behave like you expect them to, it looks normal. In the second half they get crazy and meet those business people. In the beginning it’s more drama, and the second half turns out to be more a comedy.”

What is next for Half Brothers?

Christoph: “We have distribution in the United States by Parade Deck Films. They are an established independent distributor. They have 15-20 films on their reel and have various genres. They will do a theatrical release in February 2018. They go from one town to another getting reviews, and then they do a Video on Demand, Blu-ray and DVD release. That takes care of North America – that was the goal – to get the film out in the biggest English market. The next goal would be to get distribution for the rest of the world, everywhere where people speak English or see English movies.

For me personally, the biggest challenge is to get this movie out in Germany. Germans won’t go to the cinema to see a subtitled movie. At the same time, it’s hard to sell an English language movie to German television buyers because they want to see the German dubbed version, especially when there is a lot of dialogue and a lot of ‘in between the lines’ things – it helps to understand the language like your mother tongue. So we have to do dubbing for the German market.”

Christoph explained that a plan for creating a dubbed German version is in place. They’ve started a competition at a well-known media school for casting the voices of each character. He hopes begin the process of recording at the end of the year.

Like many passionate artists, Christoph cannot hide his enthusiasm when talking about film-making. His eyes light up and instantly a childlike excitement emanates from him. As we talked about where he would like his career to go next, he told me about the types of stories he likes to see and tell.

Christoph: “I think it’s important to demonstrate that I can make a movie that catches your attention and keeps it for 90 minutes. Even if the story is mediocre, I want to make sure I pull the audience with the movie. I’m the right director to establish moods, and to pull people into the world [of the movie]. If I had had a choice to see a Woody Allen movie like Woody Allen movies usually are or to see a Woody Allen movie to looking like a Roland Emmerich or a Steven Spielberg movie, then I would prefer the Woody Allen movie looking like an Emmerich or Spielberg movie. I really like how Woody Allen tells stories between people, how he develops characters, and how he discusses relationship business. But I don’t like how he is photographing it, I don’t like how he is visualizing the stories. If I had the choice I would like to pick stories like Woody Allen’s, but tell them in a more appealing way in terms of the film-making. I think that’s a good way to explain where I want to go. I like thrillers like Seven. That’s great. I like the stories on The Insider, the politics stories that reveal some great thing – I really like House of Cards by the way.

I don’t want to make CGI movies. I don’t want to use green screen and tell my actor, ‘Imagine! This yellow marker is some ugly thing, and this box is the space ship. And the green world around you, just imagine this is a planet and everything is red.’ I want to see what is going on; I want to look at the screen and see my scene as it really appears. I want to work with actors in a set up that really exists. That’s what I like to do.”

Since Half Brothers is his introduction to the independent film industry in America, we also talked about his desire and potential to make films in America.

Christoph: Of course there is a hope, but I don’t know the American independent scene and community well enough to tell how realistic this is. I would like to get into the American independent scene very much, even more than I would like to do a Hollywood movie. Maybe some time, but I prefer to go step by step because the pressure rises as you go. I know that from advertising. When you spend half a million on two minutes then you know what pressure is! I think a good next project would be an independent movie with a 1-2 million budget. That’s something I really could imagine to do in the United States.

I want to make movies here because I like how Americans tell stories in cinema.

I’ll give you an example. The Germans when they open a movie they like to show people who get up, turn off the alarm clock, go to the bathroom, brush their teeth, go to the kitchen, put bread into the toaster, take it out, put the butter on it, eat it and so on. They explain everything up to the very final ending. The Americans do this in a montage: we see a person pushing the snooze button, two seconds under the shower, just pushing down the toaster, and closing the door.

In your country, maybe this is from Hollywood, it’s much more accepted to work with cliché. If you want to explain how a character works, it’s common to have two or three lines that describe the person, that you have a cliché surrounding, that you have a cliché moment. They would blame you for doing that in Germany. [German cinema] always finds the hard childhood of a person to explain why she or he acts this or that way. That’s something that depends on the type of movie, but I don’t like it in general.

If you see Half Brothers, you don’t know anything about those characters – where they come from, or what childhood they had. I did this intentionally because I don’t think you meet people in your life where you know how their childhood was. You never know. You have to deal with them anyway. Why do we have to explain why a person acts this way or that way? I don’t want to explain that, I just want to show it. And then I want the audience to think about it – that’s up to them to decide.”

For aspiring and future filmmakers, Christoph’s advice is simple.

Christoph: “Just do it. If you don’t do it, you’ll end up sitting in cafés talking about other filmmaker’s movies. Talking about movies you don’t like, talking about how you would make it much better. In the cities where there are big film schools, you meet a lot of people who didn’t make it to the film school, and they hang around the cafés, telling stories about how great they would be but they never find out. You can wait another five years, or you can just do it. Even if it’s not the best screen play of all time, and even if you don’t have the best resources and conditions.”

To learn more about Christoph Lehmann and his work, visit his website: https://www.christophlehmann.com/en/

Suzanna BowlingFebruary 24, 2021
Read More
Scroll for more
Tap
My View: One Of The Most Exciting Sounds You Can Hear – Marilyn Maye Makes Her Entrance Into The Appel Room with Tedd Firth’s Big Band Blaring
1945: North American Premiere