My life ain’t worthy of words.” 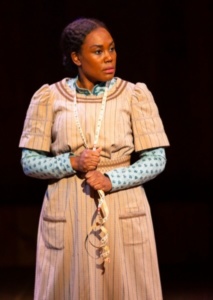 The want of passion and love are never fully conquered in Lynn Nottage’s and Ricky Ian Gordon’s Opera Intimate Apparel. Based on Nottage’s 2003 play emotion fills the air with with longing, loneliness and hope. Intimate Apparel is a collaboration between Lincoln Center Theater and the Met. The time is 1905, the place New York City, where Esther, a glorious voiced Kearstin Piper Brown, a black seamstress, lives in a boarding house for women and sews intimate apparel for clients. She has managed to stuff a good sum of money into her quilt over the years  and plans to use the money she’s saved to open a beauty parlor where black women will be treated as royally as the white women she sews for. Her landlady (Adrienne Danrich), is proud of the women she has married off and tries to match Esther up, but Ester wants love. When she receives beautiful  letters from George Armstrong (Justin Austin), a laborer working on the Panama Canal, the illiterate Esther asks for help from her customers Mrs. Van Buren (Naomi Louisa O’Connell), an unhappily married society woman and Mayme (Krysty Swann), a prostitute with dreams of her own, who is Esther’s best friend. As she begins her correspondence with George she starts to feel emotions. George persuades her that they should marry, sight unseen. 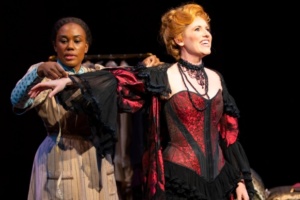 Esther’s heart lies with the Hasidic shopkeeper Mr. Marks (Arnold Livingston Geiss) from whom she buys fabric, and his heart with her, but the impossibility of the match is obvious to them both, so she marries George. 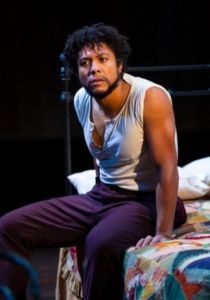 When George arrives in New York, he turns out not to be the man his letters painted him to be, and he gets Esther’s savings and gambles it away. Esther returns to the boarding house to start her dreams again now that she is pregnant. 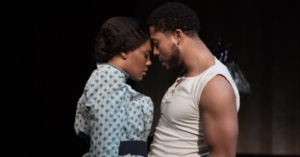 The play is based on the life of Nottage’s great-grandmother. Nottage has stripped down her play, so it becomes simple, poetic and elegant.

Gordon’s lush score is truly operatic. I appreciated the super-titles, as a lot of times the words get lost. While the score contains elements of  ragtime, this is a chamber opera at it’s best.  The score is played by two pianos played by Nathaniel LaNasa and Brent Funderburk and conducted by Steven Osgood.

The casts rich vocal talents fill the space as almost another orchestra of musicians. Almost stealing the show is Krysty Swann as Mayme. Her love for Songbird, which turns out to be George is filled with love, longing and lust and when she has to give him up it is painful. Austin as George has a strong presence as the handsome man who thinks nothing but about his own wants. The scene between him and Esther as she knows he has been cheating with Mayme is sexy and heartbreaking. My favorite moments were actually between Brown and Geiss, whose vocal were beautifully matched as their unrequited longing felt real and passionate. 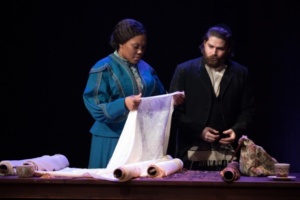 The glorious costumes by Catherine Zuber added another layer into this forgotten world. Bartlett Sher’s direction was perfect for this piece, as he added the subtlty to intimate moments. I believed every moment. I loved the added  sepia-toned photographs of unidentified Negros, of the year of the actors added a realness and the sense of loss.