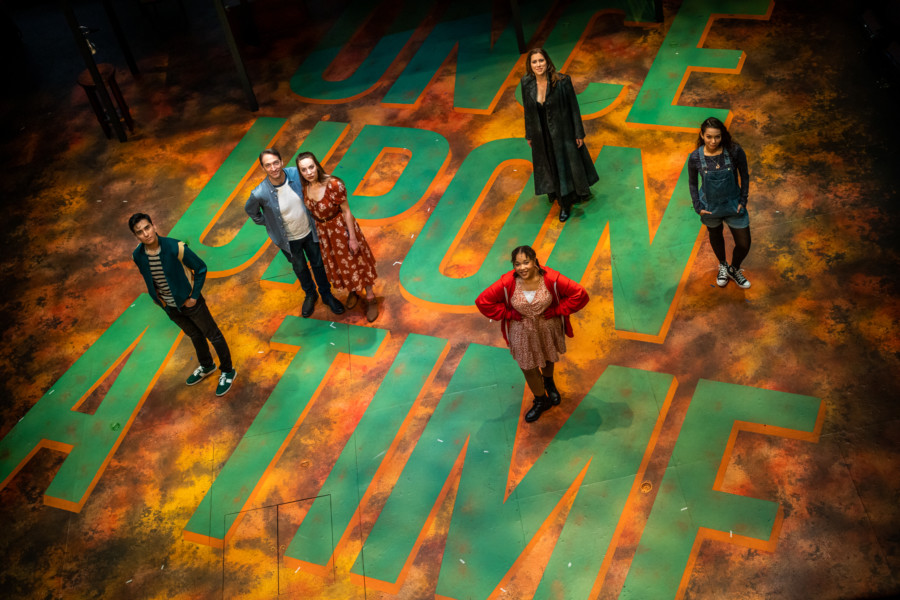 Opening last night and running through July 10th is Stephen Sondheim’s charmingly fractured fairy tale, Into the Woods.  Book writer James Lapine has cleverly intertwined several iconic Brothers Grimm fairy tales which turn out to have not so happily-ever-after endings. Cinderella it seems is more interested in going to the ball than in actually meeting the prince. Jack, who sells his cow for a handful of beans does not seem interested in the gold he steals from the giant atop the beanstalk.  Rather, he’s more interested in getting back his cow — his best friend.  And Cinderella’s prince and Rapunzel’s prince do not seem contented after winning the damsels of their dreams.  Does this sound like real life? Oh, yes.  But the music and lyrics, however, are simply out of this world. The theme, “Into the Woods” will trot around in your grey matter for days as the hauntingly gorgeous “Children Will Listen” will invade your dreams. 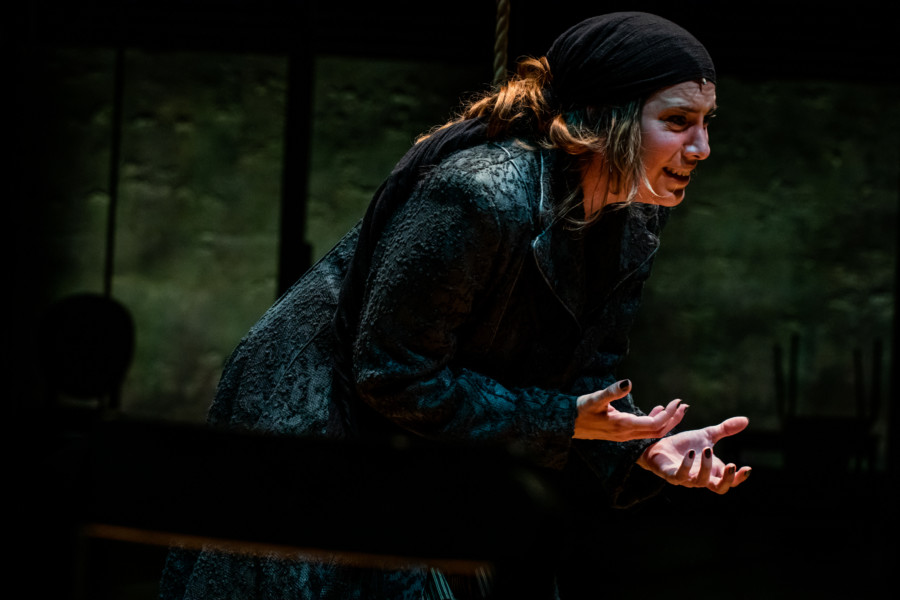 The show premiered on Broadway on November 5, 1987, where it won three major Tony Awards (Best Score, Best Book, and Best Actress in a Musical for Joanna Gleason). In 2002 there was a Broadway revival, and in 2010, a  London revival. A second Broadway revival is set to begin performances on June 28, 2022 at the St. James Theatre. 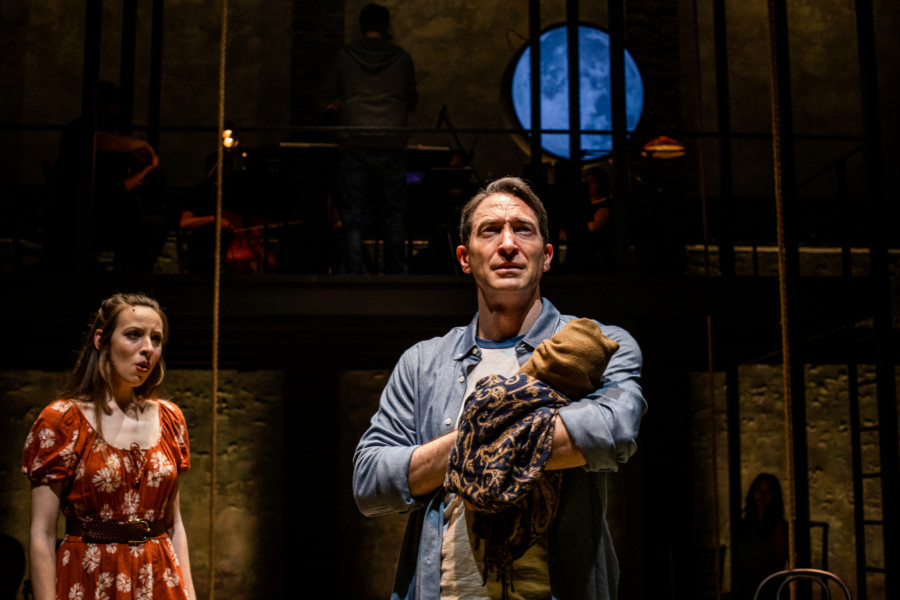 In the Arden’s production, Ben Dibble is more than perfection as the Baker. With his mellifluous voice and clear eyed actorial skills he holds us fast. Grace Ellis Solomon is a delightful and refreshing Little Red Ridinghood. Anna DeBlasio (understudy to Cinderella who went on Opening Night) did a fine job as the sweet voiced princess with the golden shoes.  Anna Faye Lieberman enchants us with her lovely voice as Rapunzel. Kim Carson makes a strong, sympathetic presence as the Witch and Katharine Fried is very appealing as the Bakers’ Wife. Unfortunately, the two princes, though bold choices and  quite comic, are miscast. 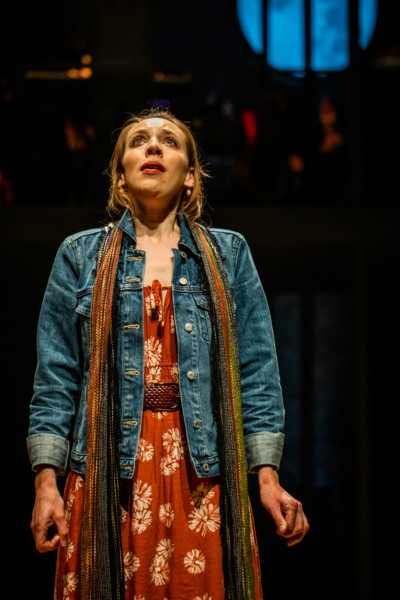 The tempos by Musical Director Ryan Touhey are quite brisk and rightly so for the show (God bless Mr. Stephen Sondheim in all his brilliance) is a long one. However, the cast in its ensemble numbers sometimes isn’t quite precise enough for the rigors that Mr. Sondheim’s score demands. This aspect may very well tighten up during the run. 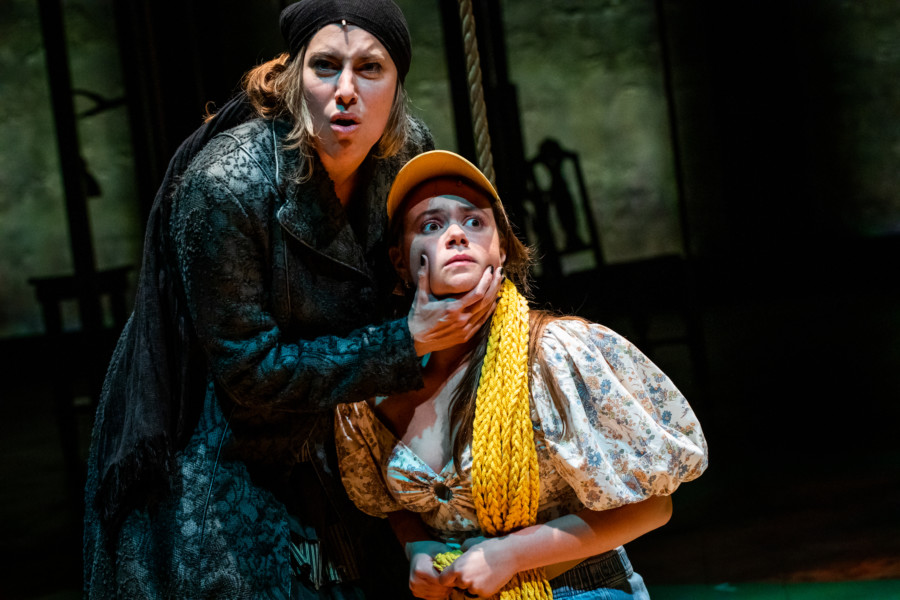 In its production aspects, the show resembles Story Theatre. Unfortunately, the minimalist approach to the scenic design comes off as not clever but simply dull. Six ropes descend from the ceiling which are hooked to the floor to depict trees. We see the beanstalk only once and it is just another thin green rope. Many mismatched chairs and a trunk are to depict different houses and castles.The costumes are a hodge podge of unattractive pieces of clothing that look like they were rejected by Good Will — colorless and flattering to no one. Books are banged together by the cast to denote the footsteps of  the giant. We get the concept but it’s just not loud enough nor threatening enough. Even the voice of the giant, portrayed by many voices in the cast chanting in unison, is a great idea but doesn’t quite work. 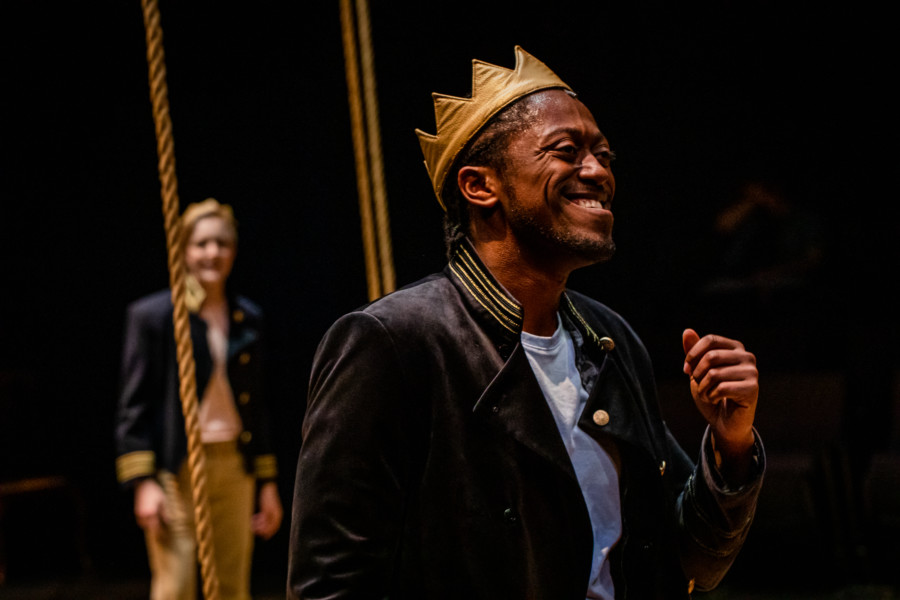 There is one piece of scenery that is very realistically depicted — a giant moon which rises and falls three times. It’s lovely.  But it seems out of context with the other simplistic visual aspects of the show.

The pace by Director Terrence J. Nolen is as brisk as Mr. Touhey’s tempos. This lends itself to the piece and the many comic moments. Kudos to Mr. Nolen for championing Sondheim’s work throughout the years. 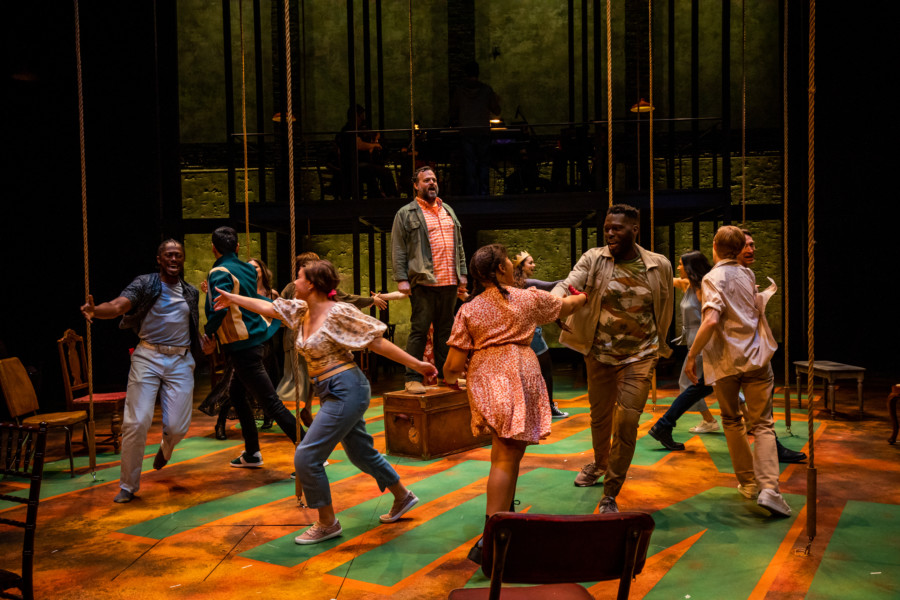