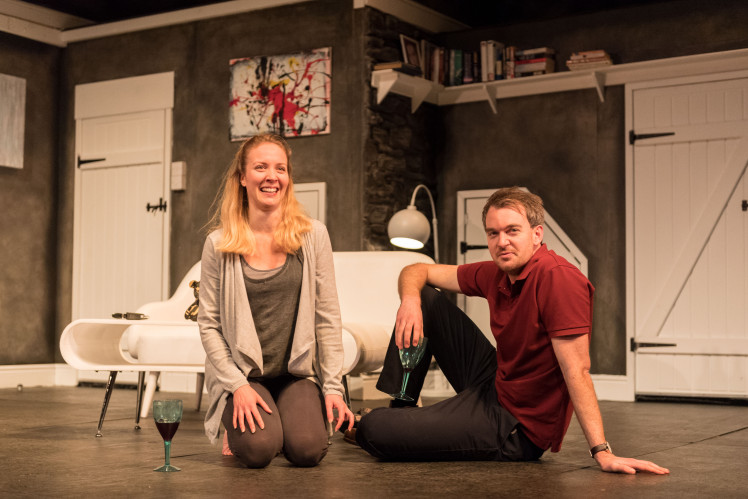 Invincible: The Exciting Secrets of the Neighbors

Invincible: The Exciting Secrets of the Neighbors 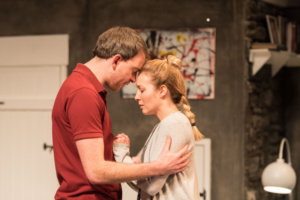 Truth be told, I’m not sure I’d want to invite any of these characters into my home for an evening of olives, nuts, and tea. But to be a fly on the wall inside of Emily and Oliver’s new home is a whole other story. The uncomfortable web that is weaved by director Stephen Darcy (with original direction by Christopher Harper) with Invincible, one of the many miraculous British imports that make up 59E59 Theatres’ BritsOffBroadway series, is just too good to pass up. The dynamics of class and intellectual/educational differences paired with the neurotic and stressed out liberals, all add up to a surprisingly strong cocktail too tasty to say no to. You don’t want to know all of the ingredients that writer Torben Betts has combine in his delicious new play, brought to NYC by Original Theatre Company and Ghost Light Theatre Productions, to give the piece such a unique flavor, but what you will want, is to savor each and every flavor as they hit your willing taste buds. 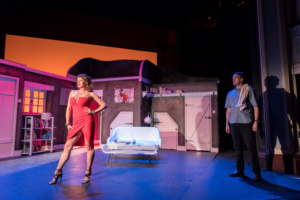 Emily Bowker is the young neurotic Emily, a passionate socialist who has moved from London to Northern England because of financial troubles, but also for socio-political ones. Oliver, her partner, and father to their unseen child, played impressively by Alister Whatley has lost his job, but together they are attempting to lay down new, less commercially-bound roots. They have invaded the neighborhood in a way, pretending to assimilate while refusing to let go of their liberal political convictions that separate them from the norm, at least in this neck of the woods. 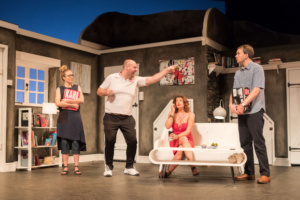 So what’s a progressive couple to do when arriving in to a new neighborhood? Well, naturally they invite the neighbors over from some drinks one evening. Arguing up until the couple from next door make their dramatic entrance, the evening is ripe with a sense of hilarious dread. Dawn is the first to arrive, with a fanciful flair that is both absurd and abstract while also being very telling. Alan is next, but only once the soccer game has ended, with cans of beer and a non-stop bluster.  Graeme Brooks plays Alan, a beer-bellied postman, with a gruff, loud, puppy-dog charm, and Elizabeth Boag is his wife, Dawn. The two neighbors couldn’t be more different from the London liberals if they tried. The tea that Emily serves goes over as well as the forced conversation and pretend niceties, especially when it turns to the art of painting. But it is when government and the military are brought up and  debated, that the spiraling gets out of control and consumes all four. The emotional baggage that erupts onto that living room floor, meticulously designed by Victoria Spearing, with lighting design by Andy Purves and sound design by Max Pappenhein, is breathtakingly thrilling to witness and take in.  We all hold our breath with a nervousness and dread as so many secrets are acknowledged, created, and almost revealed. 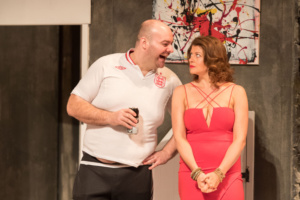 There is a moment when we have to ask ourselves as participants of our social environment, at what point do we compromise our integrity for the sake of social propriety. Emily believes in truth at all costs, (even though I’m not so sure I believe in Emily), and we slowly learn why. The dynamics of loss and the pain of motherhood and parenthood in general, are all slowly exposed but so many loose ends are left dangling.  The performances are exacting and etched in detail and depth.  Whatley as the less rigid liberal genuinely presents an Oliver that is far more complicated then the passive kind soul he first gives us. And we aren’t sure what binds him to the annoying Emily, although the second act clarifies so many of the questions that we held throughout. Boag’s portrayal of Dawn, the desperate housewife, even with all the fantastical elements playfully tossed our way, had an emotionally rawness that was based in some very real pain. Such a surprise after the initial impression we get when she first shows up in that red cocktail dress. It turns out that she might be the most honest one of the bunch. First impressions are not to be trusted in Invincible, as you never know what’s really going on behind your back.

The Stars Come Out For Rose: The Tony Parties
Opening Night With Jim Brochu and Zero Hour