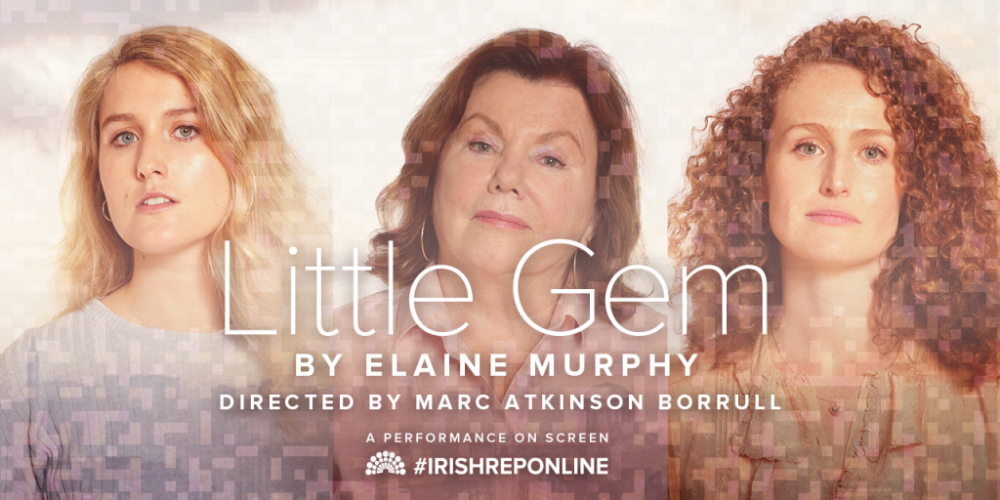 When I first saw this play at the Irish Repertory Theatre (live and in person) back in July of 2019, I thought the play was whip smart, wise, and well written, although wrapped in a scenic environment that was structurally distracting. In all honesty, my real excitement centered around my desire to see four time Academy Award nominee and two time Golden Glove Award winner, Marsha Mason (“The Goodbye Girl“, Broadway’s Steel Magnolias) up there on stage. She is a treasure, worthy of any trip to the theatre (not that I needed much to be drawn). I had never seen or heard of this Little Gem, Elaine Murphy’s debut play which was first staged at the Dublin Fringe Festival in 2008, so I was eager to see what that Irish woman’s voice had in store for us. Now, almost two years later, knowing full well what I was sitting down for, I was equally thrilled to have the opportunity to see this wonderfully engaging actress giving us her all once again in this all together touching and engaging play, thanks to the Irish Rep who most gracefully is offering up for our consumption their new digital production of this delicate and delicious play.

It is truly a Little Gem, this play, created with a strong sense of attachment and authenticity, crafted with clarity and care in a series of three overlapping monologues that slowly wind themselves together into a whole. It’s perfect in its constructed Irish-ness, overflowing with funny whip smart asides and sexual frankness that when delivered with that gloriously rich accent rings true and charming, even in its drunken bold honesty. Filmed remotely at the three wise and wonderful actors’ homes, separately but in sinc in their Connecticut, London, and New York homes, the play rings even more truth inside of this streaming than it did on the Irish Rep‘s stage. It has been elevated with grace inside the filming and space, thanks to the strong direction by Marc Atkinson Borrull (Gate Theatre’s Beginning) who found a closeness in the close-ups that only deepens the connection and heightens the clever dynamic.

With the same three actors from the stage production at the Irish Rep, the three generations of North Dublin women unwind a tale that, at first feels unrelated and separate, but as each very personal monologue progresses their individual stories wrap themselves up together in the arms of one another, finding comfort in the conflict, and love in their attachment. Mason as Grandmother Kay delivers a strength and connection that just gets deeper and more compelling with each shot. The woman pulls us in with her personal itch, as she struggles with a life that has devolved into being strictly a caretaker to her beloved Gem. Unfulfilled physically, she unspools her devotion with every breath, hilariously charming us with her authenticity and poignancy, while never appearing to work to hard to gain our confidence. It’s a master class of containment and connection, one that beautifully encapsulates the heartfelt dynamic with ease and determination.

Lorraine, portrayed strongly by the engaging Brenda Meaney (RTC’s Indian Ink), delivers the middle ground with a heart-breaking clarity. Weaving her tale around the hairy dancefloor of therapist-suggested self-care, she easily entangles us in her need and complicated connection. It’s strong and calculated in her obsessive awkwardness, giving us a true reality that sits strongly on the sidelines. Amber, the youngest, played much more wisely this time around by Lauren O’Leary (Other Room’s The Awkward Years), finds an edge that delivers her tense youthful story with force and rebellious glee. She’s a firecracker of a woman, aggressive yet confused and scared about her place and her future, but here in the filming, we can really tie ourselves into her sweet and strong dilemma with a compelling edge. On the 2019 stage, her movements were too abrupt and distracting, at odds with the surrounding moments. As I did back then, I laid the blame squarely on the feet and vision of director Borrull who gathered the three in an awkward nonsensical construct that failed to draw us in. If he had, as he does in this glorious filming, believed in the strength of the story and the three actors, the piece would have delivered the story of love, grief, confusion, and deliverance as it does here, with an intimate dynamic, but on that stage of the Irish Rep, he shifted and moved the three around clumsily inside an antiseptic waiting room set that never fully explained itself. In an abstract way, I thank god for her pandemic-minded constructs that produced this tenderly filmed engagement.

This time around the unraveling, the production gives us an environment that never distracts or makes us question its reasonings. The filming, with a scenic design credited to Meredith Ries (Rattlestick’s No One is Forgotten), illuminates the inner workings of a three generational brandy quota with intimacy and close-up honesty, finding a forever truth in each and every camera angle. With lighting by Michael O’Connor (59E59’s Hal and Bee), straight forward costuming by Christopher Metzger (Wheelhouse’s Enemy of  the People), a solid sound design by Ryan Rumery (RTC’s Apologia), and sound mixing by M. Florian Staab (Public’s Teenage Dick), with Arthur Atkinson (IRT’s Juno and the Paycock) serving as the production stage manager. the story unfolds simply and beautifully inside every frame, never distracting us or pulling us away from any of these women’s weavings. This is especially true with Mason’s beautiful nuanced storytelling at the emotional center. She has this innate ability to give layers of perspective and humor to a grandmother’s tale with an added edge of honest youthful vision and emotionality. The two other actors share their stories with a strong tug toward the connective core, working overtime and never fading, but it’s Mason who pulls us to the end, cradling us in her outstretched arms so we can sleep comfortably in her embrace. It’s a vast improvement to the staging I saw, and for that, this Little Gem shines with much more connective grace and generational beauty.

Reservations are free but required to access this digital event. A donation of $25 is suggested for those who can afford to give. Book now by going to the Irish Repwebsite by  clicking here.