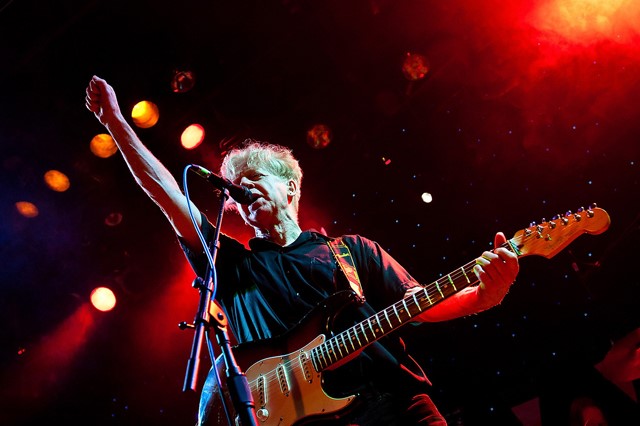 Established in 1210 AD by England’s King John, Wexford is a town on the southeast coast of Ireland, at the mouth of the River Slaney, over which the world-famous Selskar Abbey presides as does the Bullring Market Place’s Pikeman Statue celebrating the 1798 Rebellion against Britain’s rule. For centuries, Wexford was, and still is, a musical melting pot gathering songs and aural histories brought to its seaport from every corner of the globe.

Desert Rose, with book, music and lyrics by Larry Kirwan takes place in early 2003, Larry Kirwan’s band, Black 47, warned against the proposed invasion of Iraq; in fact, during their St. Patrick’s concert that coincided with the outbreak of war, fights broke out over the band’s stance.  The war lead to years of strife as Black 47 added songs about the war culminating in the release of the IRAQ CD in 2006. “Our fans were the ones doing the fighting, while the Bush and Clinton era children were not.  Most of the songs on the CD came from first-hand accounts sent back to us. These songs, when recorded, became firm favorites with troops throughout Iraq and Afghanistan.”  Eventually the war ended but Kirwan couldn’t forget the characters he’d created.  “They rattled around in my head and I wondered how they were fitting in back home.  Eventually a storyline appeared. Lieutenant Mark Peters is running for Congress in 2016, so the unsolved death of his hometown friend, Spec. Johnny Hansen, back in 2006, is again under the microscope.  Was it friendly fire or were they betrayed?” And so Kirwan began to write Desert Rose, a musical that would seek to get to the heart of the conflict, with a score composed of the Rock & Hip-Hop songs that the troops were listening to, aided by musical theatre pieces, and curried by Iraqi musical influences. “It was important to add the two Iraqi interpreters, one a Sunni, the other Shia; I found the only way to simplify the tangle of the US in Iraq was through a number of star-crossed romantic entanglements that continue to resonate 10 years later.”  Desert Rose is an uplifting, rock musical exploring war, international conflict, heroism, love (unconditional and unrequited), sacrifice, betrayal and eventual redemption.  And as in all complicated conflicts and great works of art, at the center of the piece is the truth.

Green Suede Shoes is a documentary film inspired by Larry Kirwan’s Broadway-bound, new musicals, as well as his own remarkable personal journey, including his most recent new book, A History of Irish Music. A prolific author of 16 plays and 5 books, Kirwan’s deep appreciation and knowledge of the immigrant experience is stunning.  His ability to capture that experience, make it universal and then share it with an audience is simply profound.  When he steps on stage, he is even more comfortable than at his writing desk.  His 25 years leading Black 47 and his parallel careers as playwright, author, journalist and radio host blend into a mesmerizing, emotional, geographical and historical journey.  Through a mix of storytelling, acting, and singing, Irish history comes roaring to life on stage.  Kirwan explores the roots of the Irish/British conflict from 1169 to the recent “troubles” in a frank and, often, comic tour-de-force; he places special emphasis on emigration to the USA and life in New York’s Five Points as Irish immigrants and African Americans create modern culture.  Larry Kirwan arrived in New York when he was 22.  Within months, he was leading the new-wave band Major Thinkers into weekly battle at CBGB’s. He formed Black 47with Chris Byrne, garnered hundreds of rave reviews for his music, his band and for his cannon of written work and now has Broadway in his crosshairs.  Directed by Academy Award nominee and multi-award-winning director, Chuck Braverman, and produced by Academy Award nominee, Peter LeDonne, whose work in theatre and film has spanned more than 40 years, Green Suede Shoes will capture all of this inexhaustible energy on film.