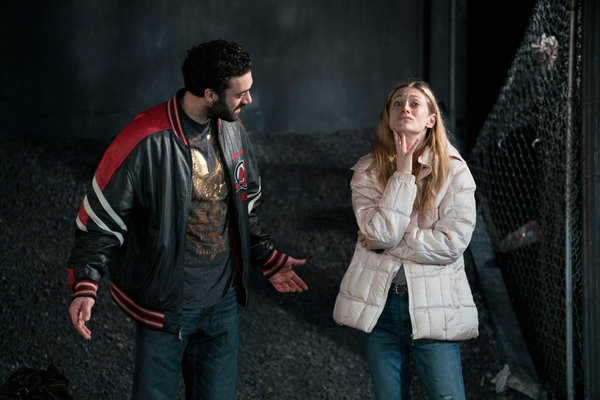 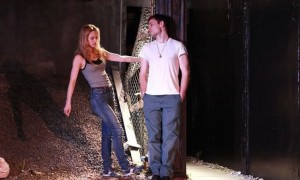 Martyna Majok, Ironbound at the Rattlestick Playwrights Theater in a co-production with Women’s Project Theater grips you in its struggles of Darja (Marin Ireland). A Polish immigrant now living in New Jersey, she is struggling to make a living, care for her son and find some kind of security. Though the cast is excellently portrayed it is Ms.Ireland performance that is rivetingly real.

As the play starts it is 2014, Darja (Ms. Ireland) is underneath a freeway at what looks like a war torn bus stop that the bus has long forgotten. It is cold and her boyfriend, Tommy (Morgan Spector), a mailman, is trying to get her in his car. Darja wants nothing to do with him considering he has been carrying on an affaire with the women whose house she cleans. Tommy lies saying it was a one time thing but Darja has traced the calls and knows exactly how many times it has been. Darja, at 42 has been married twice, ties to demand $3,000, so she can get a car and search for her son, is 22, drug addicted and missing. She loses.

We are transported back in time to 22 years before, where Darja is waiting for the bus with her husband, Maks (Josiah Bania). Maks is also a Polish immigrant, who dreams of moving to Chicago to become a blues musician. He is a dreamer, Darja, a realist who works two jobs, one at the factory, where they both work, the other cleaning houses and she is now pregnant. Though the two have chemistry, there is no meeting of the minds. 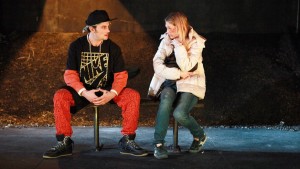 Flash forward to the night Darja’s second husband has beat her up for the last time. She married the boss of the factory, but now the factory is gone. Teenage Vic (Shiloh Fernandez), a tough street kid who offers her advice, money and hope.

Ms. Ireland, a Tony nominated for reasons to be pretty, never leaves the stage. She paints a clear picture of this strong, proud, calculating, trapped women real. Her love for her son redeems her and condemns her and we feel her pain. Mr. Spector is funny and offers a glimpse into a man who wants to do right despite his flaws. Mr. Bania gives us the sincerity and tenderness of an artist and Mr. Fernandez has his moments, making us think of an angel in a unrecognizable disguise.

Directoir Daniella Topol allows Ms. Majok’s play to be quick paced, with the right beats. It is funny, touching and lets us know inside her characters. These are all people trapped and having to navigate within their own poverty.

Ironbound refers to a neighborhood in Newark, but I think it also relates to all of us who are trapped within ourselves.