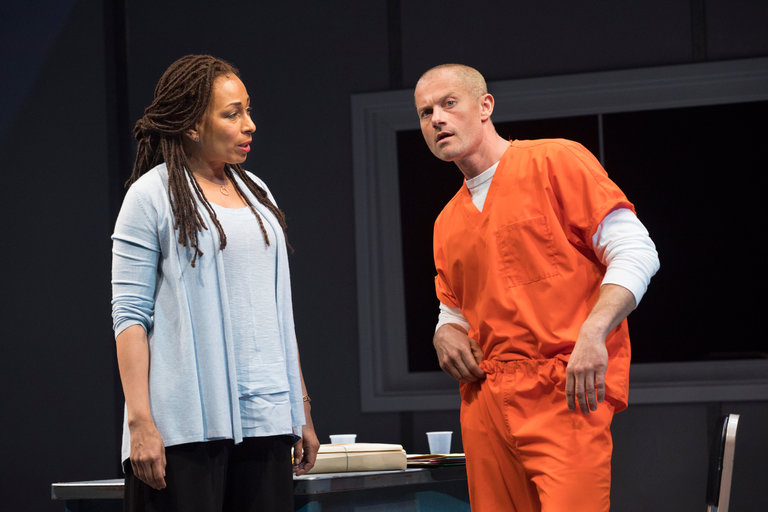 Is Building The Wall A Psychic Prediction Of What’s To Come?

Is Building The Wall A Psychic Prediction Of What’s To Come? 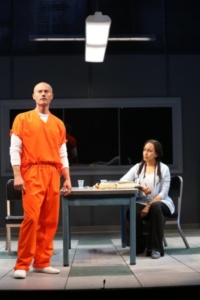 In seeing Robert Schenkkan’s new two handed drama Building the Wall, I wanted to cry for humanity. Schenkkan, best known for his Tony winning LBJ drama All the Way, his Pulitzer Prize winning The Kentucky Cycle and co-screenwriter of “Hacksaw Ridge,” has given a bleak and terrifying look of the immigrant situation. 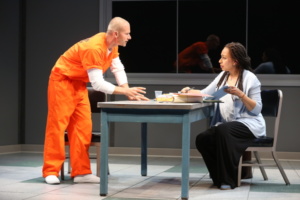 In Building the Wall, we are introduced to Gloria (Tamara Tunie) a writer who has been given permission to interview Rick (James Badge Dale), once a prison administrator, now an inmate awaiting death. We learn how Rick, a Trump supporter, has done the unthinkable. Well actually, as you learn all the circumstances, how we all could become the unwitting killers and relive the holocaust all over again. This time the victims are the rounded up immigrants.

Following a terrorist strike in Times Square, martial law has been declared. ICE and Homeland Security have rounded up and arrested all the immigrants to be deported. The private private prison system, took a lot of the detainees. When the countries don’t want back their own, the prisons become overcrowded. As the prison are stuck with a population explosion, they can not handle sickness attacks. Rick is a guard and the head of one such facility. As the body count mounts Rick is approached to find a way to get rid of the bodies, so they burn them. This leads to the unthinkable. Rick has taken the hit and been blamed for the crime, but the fact is those that were really the criminals have gone scott free.

Tamara Tunie, spent 16 seasons on Law and Order: SVU. She brings a character just like that to the stage and in turn is the sounding board for James Badge Dale. Without her solid work, the character of Rick would just be giving a monologue. Dale is the son of Grover Dale and Anita Morris who I am sure is smiling down from the heavens over her son’s work. He has cut his teeth on “Rubicon,” “24” and “The Pacific. Dale is the victim, the perpetrator and the one who opens our eyes. At one point Gayle asks him, why didn’t he stop this madness. Rick has a wife he loves, a child he wants to protect who is sickly and when you know this much, that questions is not as simple as anyone thinks, when you are being threatened. Dale’s performance doesn’t make amends, he excepts his responsibility. Director Ari Edelson lets us see his humanity, his pain and the out of control situation he has been placed in. He then shows us the courage in another. The amount of voices it takes to stop the madness is not as many as one would think.

Schenkkan’s Building the Wall is an urgent cry of warning. Maybe he has channeled what has already begun, but it can be stopped. This play is hard to take and in all honesty, I just wanted to throw-up after seeing it, but it needs to be seen.

Denial is how the holocaust happened and denial will make this happen again. Conversations need to begin, blame eradicated and new leaders need to come forth, for none of the old ones were any kind of choice. Maybe this play will start that dialogue, if not God help us all.