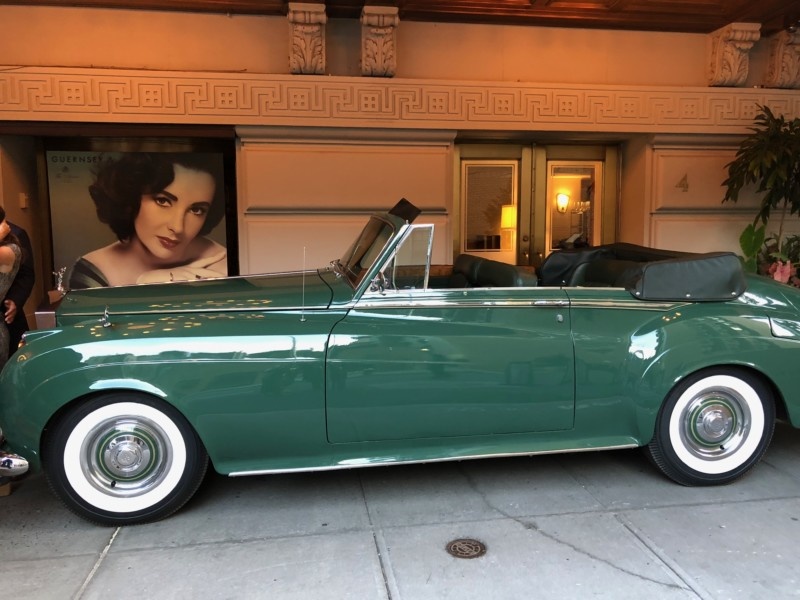 Elizabeth Taylor’s custom-built convertible Rolls-Royce Silver Cloud II, nicknamed “the Green Goddess” was expected to fetch up to $2 million at a New York auction last night. Instead it only brought in $450,000.00.

The auction house Guernsey’s, hosted the event last night at the fabulous Pierre Hotel. The delightful reception was hosted by Rolls-Royce.

Taylor ordered the Rolls-Royce following her marriage to singer Eddie Fisher. The car was painted a unique shade of “smoke green” at her request — a shade to match the green wedding dress she wore to marry Fisher.

Known by her fans as the “Green Goddess”, the car was delivered to The Pierre Hotel, where Taylor was living in New York, at Christmas.

In 1962 Taylor traveled to Rome to film “Cleopatra”, traveling with husband Fisher and “the Green Goddess” in tow.

Taylor shortly began an affair with co-star Richard Burton, who was spotted driving the car on several occasions. Taylor divorced Fisher, but kept the car for around 20 years, before taking out an advert in the Wall Street Journal to sell the vehicle.

A Californian fan for four decade owned the car and last night it went to a California car dealer. My guess is he will flip it to either Jay Leno to Kayne West.

Also for sale was Elizabeth Taylor’s iconic figure-hugging Gianni Versace dress which went for 2,500.00 and Christian Louboutin evening bag that failed to sell.

Rounding off the auction was Guernsey’s Auction House Founder and President Arlan Ettinger’s 1964 Ferrari 330 GT, which went for $250,000.00 to a person on the phone.