Is There Any Sanctuary From War?

Is There Any Sanctuary From War? 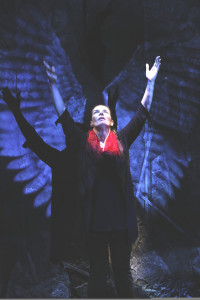 Political viewpoints are a personal thing and in Susanne Sulby’s solo theatre piece, Sanctuary we start and end in the arms of an angel. We follow a woman whose beloved son, we see growing up as he choses to fight. “I didn’t raise my boy to be a soldier,” she states as she watches the news reporter on TV and a POW in Kosovo. Spliced into this is a soldier reading his mail in the trenches of war with words by Rumi. What makes this so visual is the direction by Stephen Stahl and the projections by Olivia Sebersky who needs to be acknowledged for her exquisitely haunting work. Images of war and it’s ravages, Bosnia, Serbia, Iraq, Vietnam, the hurt, the dead, Hitler, the atomic bomb, the simplicity of every day life.

The characters in Sanctuary are vast as is the story line. The POW turns into a Japanese woman whose 12-year-old daughter died from of leukemia a residue from the atomic bomb, a woman warrior, wondering what it feels like to kill with sword in hand. Ms. Sulby plays them all, some better than others. She is the observer, victim, mother and wife as history hip-hops all over the place.

As an actress and writer Ms. Sulby is talented, but in a strange way in this piece she takes on too much. Nothing is truly fleshed out and we feel as if we are on the outskirts looking in, instead of geared into doing something or feeling. Part of the reason for that is the skipping around in time. Just when you are getting to know a character another shows it’s face and we feel cheated. Less is always more or in this case maybe the piece could be extended to ninety minutes instead of sixty. 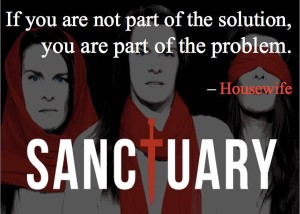 Only the insane truly want war. To see the impact of war on women is a worthy subject. I just wanted to see more of the heart and soul of the matter.

Suzanna BowlingJune 22, 2022
Read More
Scroll for more
Tap
The Beauty and Grace of Dragon Boat Racing
China Doll What Were They Thinking