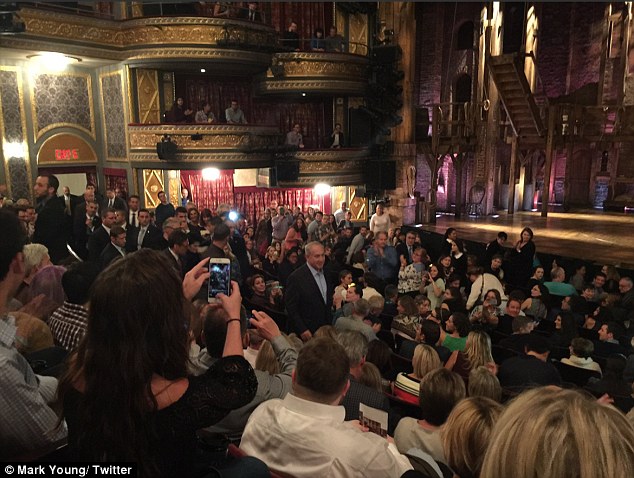 At Hamilton Saturday night Israeli Prime Minister Benjamin Netanyahu was both applauded and boo’d. The show started late because of his arrival with heightened security slowing down seating. He arrived before the lights went out and yet cries of “Free Palestine” erupted.  Two women were even escorted out of the Richard Rodgers Theatre after trying to shove their way through the politician’s heavy security.

Netanyahu was in New York for the United Nations’s general assembly.

Republican nominee Donald Trump met Sunday morning at Trump Tower with Netanyahu. The press was barred from covering Trump’s meeting with the prime minister but offices for both said they discussed Israeli security and efforts to achieve peace in the Middle East. Their meeting lasted over an hour and included discussion of the Iran nuclear deal which Trump and Netanyahu are fierce critics; military assistance; security; and regional stability.

A statement from Trump’s campaign stated; “Mr. Trump recognized that Israel and its citizens have suffered far too long on the front lines of Islamic terrorism.He agreed with Prime Minister Netanyahu that the Israeli people want a just and lasting peace with their neighbors, but that peace will only come when the Palestinians renounce hatred and violence and accept Israel as a Jewish State.”

According to Netanyahu’s office, “Prime Minister Netanyahu thanked Mr. Trump for his friendship and support for Israel.”

Democrat candidate Hillary Clinton met the Israeli leader in the evening at The W Hotel USQ in Manhattan.  A post on the Israeli prime minister’s Facebook page said the meeting lasted nearly an hour and included Israel’s Ambassador to the United States, Ron Dermer and Jake Sullivan, a policy adviser to Clinton’s campaign. “Netanyahu discussed with Secretary Clinton a broad range of issues relating to advancing peace and stability in the Middle East as well as the potential for economic growth through technological innovation,” the statement said. “Mr. Netanyahu thanked Secretary Clinton for her friendship and support for Israel.”

The candidates’ meetings with the Israeli leader take place a day before Trump and Clinton face off at their first general election Monday night at Hofstra University in Hempstead, New York.

RossDecember 29, 2021
Read More
Scroll for more
Tap
Broadway Flea Market a Success
My View: It Was Catskills On 55th Street – Do You Know A Comic Who Wasn’t A Member of The Friars Club?