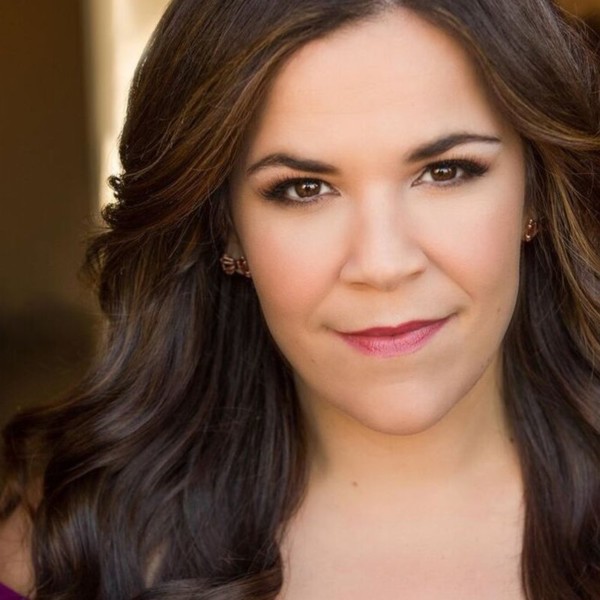 It Doesn’t Get Better than Lindsay Mendez

It Doesn’t Get Better than Lindsay Mendez 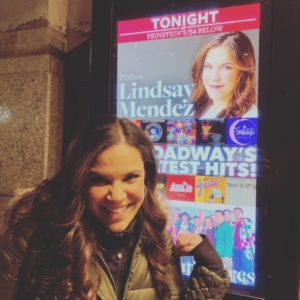 When Lindsay Mendez opened her latest cabaret show at Feinstein’s/54 Below on Thursday night, she began by apologizing that she wasn’t going to share the story of her life with us like people normally do in cabaret… and then she did exactly that.  This delightful little fake out brought a big smile to my face, just like everything this powerhouse talent did. Expect the unexpected from the amazing Lindsay Mendez.

When Ms. Mendez talked about getting her start as as a performer at age 6, I could just imagine that huge grin, those playful eyes, and that indomitable spirit bursting out of a tiny and fearless little girl’s body. But her beauty and maturity now can’t hide the kid inside of her, which pops through unexpectedly like a spiritual Jack in the Box. She gleefully partied with the 54 Below audience as if we were a roomful of her childhood friends enjoying a sleepover. I never wanted the party to end.

But the hour long show flew by in what seemed like mere minutes. That’s because the flow of the evening was seamlessly crafted, yet all the while seeming totally unplanned. Making it look that easy is what professionalism means. 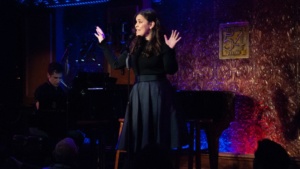 Ms. Mendez cheerfully described herself as a “Mexican Jewess,” who grew up loving musicals and mariachi. I personally like Cholula hot sauce with my lox and bagels, so I could relate. She also shared that, as a child, she played one of the Siamese twins in The King and I on not one but two occasions, being as close ethnically to anything appropriate as her California hometown could offer.

I share her deep affection for the tuneful era of the 30’s and 40’s. She opened her show with a peppy little known gem from an early Judy Garland movie called “Everybody Sing” by Axt, Freed and Brown. I’m planning to sing it in the shower as soon as I finish writing this review. She then bent gender a bit with a period comedy favorite, “Sam, You Made The Pants Too Long” by Whitehouse, Louis, Young, and, somewhat surprisingly, comedian Milton Berle.

Taking us into her teenage years, she segued smoothly into “Nothing” from A Chorus Line, music and lyrics by Hamlisch and Kleban. When she demurred that she may not look good enough in tights for A Chorus Line, all I could think was: Sexy is as sexy does. And she does it!

Now, Ms. Mendez is not, in fact, single. She married briefly at 23, divorced, and then did that “little show down the street” about the green girl…uh, what’s it called?  Oh, yeah. Wicked.  Then, while working in Kansas City, she went with the cast on their night off to the Green Lady Lounge  (really!) and met Phillip Wakefield, the talented jazz drummer who is now her husband. Their exchange of  vocal and percussive riffs during the comedy number, “Ooh Bang Jingly Jang” by Bob Merrill was a highlight of the night.

“It’s You I Like” was a nice, jazzy tune by one of the world’s nicest guys, Fred Rogers. Yes, Mr. Rogers.

I wasn’t surprised to be told that this rubber faced comedienne initially learned her chops from watching I Love Lucy. She proved it by singing “Lily of the Valley”,  from the operetta spoof episode, exactly as originally performed by Vivian Vance. Except maybe better.

Another reason to love Ms. Mendez is her support of new musicals and new writers. She shared a deeply moving song written just for her called “It’s Not That Different” by rising songwriters Tim Rosser and Charlie Sohne.

Every thing leading up to  this moment was so wonderful, I actually forgot I was waiting with baited breath to hear “Mr. Snow,” her show stopper from the recent revival of Rogers and Hammerstein’s Carousel, for which she won the Tony this year.  Again, it was not just that great set of pipes but also her talent as an actress which riveted me, watching as she seemed to discover for the very first time each possibility of being married to her New England fisherman beau.

She closed her regular show with another great vintage comedy tune, “The Neck of the Chicken” by Jimmy McHugh and Frank Loesser, before laying us in the aisles one more time with her encore, “With So Little to be Sure of” from Anyone Can Whistle by Mr. Sondheim.

This brings me to the matter of the awesome group of musicians backing her up, including the subtle and tasteful percussive work by Mr. Wakefield. Six pieces looks like a lot for that small stage. But it couldn’t have been a tighter ensemble, including Summer Boggess (cello), Michael Blanco (bass), Brian Hernanadez-Luch (violin), and Craig Magnano (drums), all beautifully arranged and  conducted by her pianist and Musical Director, Marco Paguia.

In her typically humble fashion, Ms. Mendez expressed her appreciation for being able to work in New York with so many talented artists.  Speaking for all those artists, I think I can add in closing: The feeling is mutual.

Suzanna BowlingNovember 18, 2022
Read More
Scroll for more
Tap
Christina Hendricks and Alysia Reiner With The Moms and EGG: Part 2
February Is A Pleather of Treats and Events to Warm Your Heart