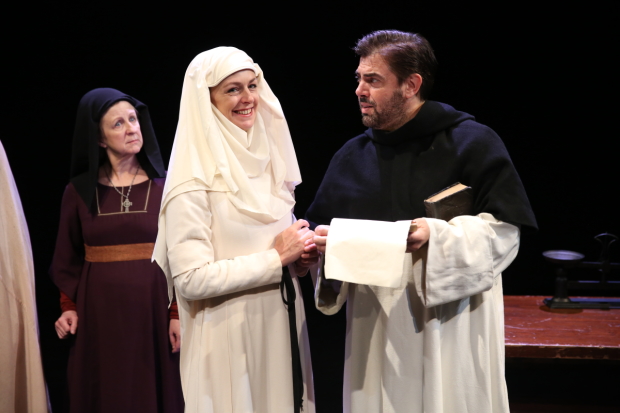 It Should be Titled The Un-Saintliness of Margery Kempe

It Should be Titled The Un-Saintliness of Margery Kempe 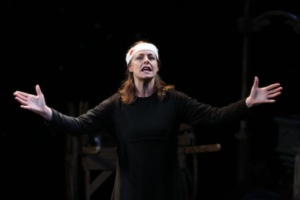 It is hard to care about a character when she is so self-absorbed. Like Pippin or The Queen of The Mist, the main character in The Un-Saintliness of Margery Kempe wants to be spectacular. The problem is, she doesn’t care at whose expense. Based on a real person, Margery Kempe was an English Christian mystic, known for writing through dictation The Book of Margery Kempe, a work considered by some to be the first autobiography in the English language. Her book chronicles her domestic tribulations, her extensive pilgrimages to holy sites in Europe and the Holy Land, as well as her mystical conversations with God. 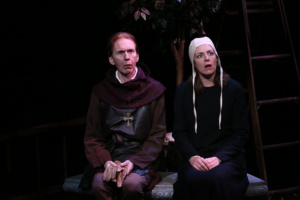 The time is the 14th century, the place England. Margery (Andrus Nichols) wants to be noticed, so she up and leaves her cuckold husband (the delightful Jason O’Connell) and her six children Felicity, Hope, Patience, Forbearance, Endurance, and baby Resignation. In reality, she had at least fourteen. She wants to find Hell and be at the bottom of the heap. Margery damns morality!  She buys a brewery when she thinks that will make her sinful, but she fails.  So, she decides to be a saint and flatters the Vicar (Timothy Doyle) but is tempted by a lustful, sexual handsome man (Vance Quincy Barton). Then, thanks to an accident, for a brief time becomes one. She again leaves her family and blackmails her way onto a tour that will take her across the sea to the Holy Land. She drives her fellow travelers crazy, especially the Holy Land tour guide, Friar Bonadventure (Again, O’Connell at his best). She gets kicked out of the Holy Land for her mock “piety” and returns home to write about her adventures. 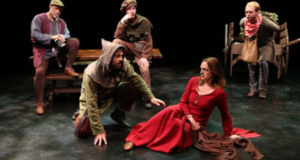 John Wulp’s text is at times humorous, but it lacks any kind of fiber. Poetic at times, the audience struggles to find meaning in this. Unlike Candide, Margery neither grows up, learns the lessons of life, or ever cares about anybody but herself. 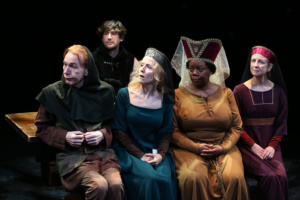 Director Austin Pendleton has tried his best to make this 60-year-old play entertaining. Pendleton and Wulp (also the production’s set designer) have made this like storybook theatre with the cast playing multiple roles, imaginative sets pieces, and quick changes from a trunk. Kudos to Barbara A. Bell for her simple yet effective costume design. Also, Ryan Rumery for his original music.

As Margery, Nichols’s performance struggles against the text to make her human. Jason O’Connell is an actor to watch. It is wonderful to see him getting more and more subtle in his comedic genius. Thomas Sommo almost steals the show as the horse, Pegasus. Also, in this talented cast are LaTanya Borsay, Michael Genet, Ginger Grace and Pippa Pearthree. All give outstanding performances.

In a world of #MeToo, Margery puts womanhood back a couple of decades.

The Un-Saintliness of Margery Kempe: The Perry Street Theatre Company at The Duke on 42nd Street, 229 West 42nd Street, until August 26th.