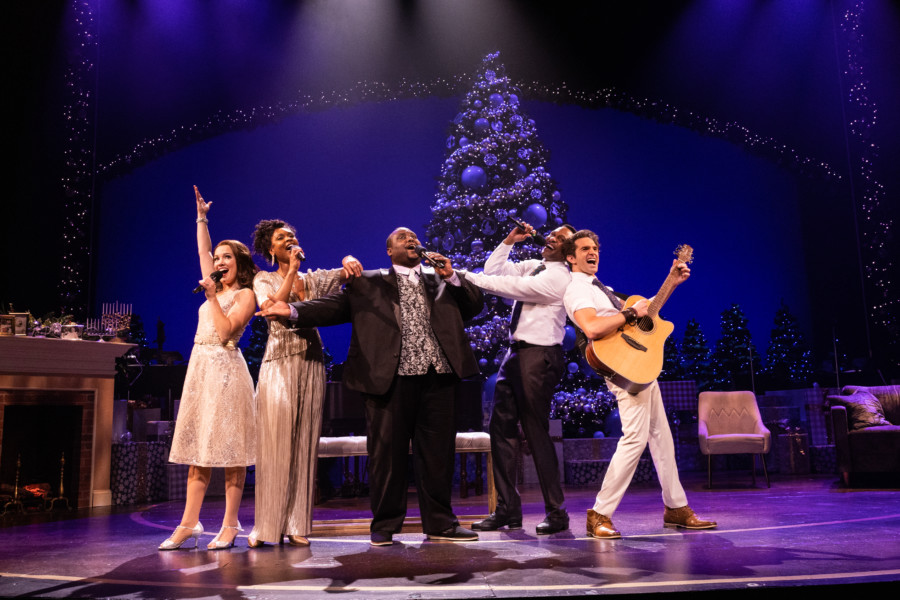 The opening night performance of Paper Mill Playhouse’s A Jolly Holiday: Celebrating Disney’s Broadway Hits was a delightful evening of cheer. With a simplistic, but effective set by Kelly James Tighe  and spectacular lighting by Charlie Morrison, Paper Mill Playhouse was ablaze in wonder.

The Lion King, was next with the spirited team of Major Attaway and Dan DeLuca in a “Hakuna Matata”. The first highlight of the night. Broadway’s Kissy Simmons was back as Nala recreating “Can You Feel The Love Tonight” with Jarran Muse (Broadway’s Ain’t Too Proud). This was the first of the three leads recreating roles they played ether on Broadway or on the road and it is clear why these talented performers got the roles. Jarran then lead the company into a stirring “Circe of Life’.

Coming to Paper Mill Playhouse next year and our next show highlight was Kissy singing the gospel “Zero To Hero” from Hercules. With a voice that is heaven sent, Kissy sent this song straight to the Gods. The trio of men then brought us “Go The Distance”.

Gender switching roles brought us Dan DeLuca in “My Strongest Suit” from Aida.

Kara Lindsay in perfect voice sang the classic “Part Of Your World” from The Little Mermaid, as Major Attaway brought Jamaica to New Jersey with “Under The Sea”.

Jarran and Kissy were back to duet on the beautiful “You’ll Be My Heart” from Tarzan.

Next is one of my favorite shows Newsies with “Carrying the Banner”. Next recreating her Broadway winning role Kara Lindsay belted out “Watch What Happens”, again proving why she got the part. The spirited “King of New York” and then Dan recreating “Santa Fe” ended the first act with a bang!

In the second act “Were All In This Together” from High School Musical took on a new meanings. Creating a warn fuzzy feeling of being back.

Five songs from Mary Poppins had Kara recreating a role she played with “Supercalifragilisticexpialidicous” and Jarran doing a mean tap in “Step In Time.”

From The Hunchback of Notre Dame that premiered at Paper Mill Playhouse came “Someday” with Major and Kissy and a heartfelt “Out There” by Jarran.

Major took down the house as he recreated “Never Had A Friend Like Me” from Aladdin. “A Whole New World” with Kissy and Jarran and Dan bringing his emotion to “Proud of Your Boy”. Dan and Major ended the section with a rousing “Somebody’s Got Your Back”.

Ending the night, were five songs from Frozen, each one better than the last with a surprise of lights and snow.

A Jolly Holiday is so talented both in front and back of the stage. The choreography by Kenny Ingram was well thought out and executed. The music supervision, orchestrations, and additional arrangements by Jim Abbott terrific. The music direction by Geoffrey Ko done to perfection. Ko is also on piano and he is excellent, as is the orchestra: Jarred Lee also on piano, Rebecca Steinberg on trumpet, Ben Kono on woodwinds, Randy Landau on Bass and Marques Walls on percussion and drums.

My only complaints are with the book by Sandy Rustin, who at times made this feel a little theme parkish and sound design by Matt Kraus, which still is in need of adjusting.

This show however is just what the doctor ordered for these strange times. For about two hours you are transported to a simpler and brighter era. A Jolly Holiday is the perfect gift to yourself and your family.