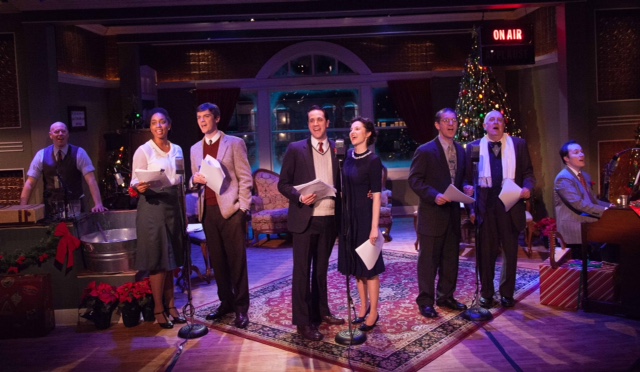 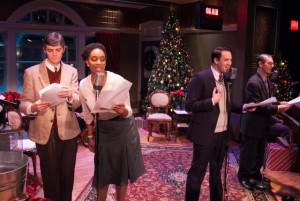 When it comes to popular, holiday themed traditions, viewing the cinematic treasured, Jimmy Stewart film, It’s a Wonderful Life, comes to mind. Here in Chicago, since 2002, Frank Capra’s celebratory, time-honored classic has been staged as a live event annually at the Greenhouse Theater. Director Gwendolyn Whiteside transported her cast and audience back to 1944 in a radio broadcast set, WABT Studio, on Lincoln Avenue in Chicago. With spectacular, period accurate costuming designed by both Christopher J. Neville and Samantha C. Jones, and an impressively detailed set designed by Grant Sabin, over 35,000 patrons have enjoyed this interpretation of the holiday classic over the years. Heavy on the saccharine, It’s a Wonderful Life: Live in Chicago! was as delicious as egg nog and freshly made candies. 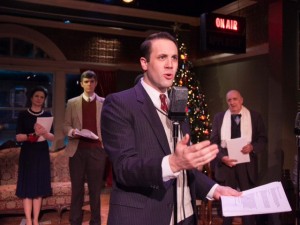 From the moment you walked into the theater, each audience member was immediately met by a duo (Camille Robinson and Amanda Tanguay) singing Christmas carols while pianist and musical director, Michael Mahler, tickled the ivories accordingly. Next a Barbershop Quartet croons “It’s beginning to look a lot like Christmas” as audience members found their respective seats. Throughout the show, real world soldiers were saluted while engagements and anniversaries were also celebrated. I happened to be sitting by a most elated bride-to-be the night I attended. Believe me, such personal milestones are more than welcomed during this show. Audience members clapped along and participated in trivia games before the actual production ensued. Such a sense of levity is a novelty I trust has kept this spectacle going on throughout the years. 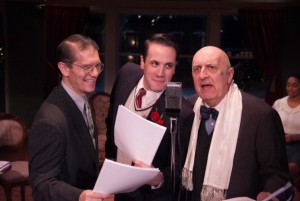 When the official radio broadcast began, we entered the world of George Bailey (the handsome Zach Kenney) a Bedford Falls banker who feels underwhelmed by his life. A remarkable cast of eight actors gave voice to the remaining townsfolk, including James Joseph as Uncle Billy in his 6th year in the part, Amanda Tanguay as Mary Bailey and John Mohrlein returning for his 14th season as Clarence. The additional cast’s vocal talents ranged from the innocence of a small child to the seasoned warbles of the town drunk at the local watering hole, without missing a beat. Set against the remarkable Foley talents of Shawn J. Goudie, audience members were reduced to tears by the conclusion. While I wasn’t moved quite that much by the material, it is hard to resist the undeniable charm of this affable group effort. 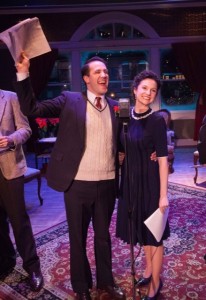 While harkening back to the “Golden Age of Radio” it is impossible to forget to mention the original commercial jingles produced here highlighting local Windy City neighborhood businesses. While the original score created by Austin Cook remained intact, new musical director Michael Mahler added his own unique and charming flair to the proceedings. This multi-generational treat might be heavy with nostalgic flair, however on the night I attended, the front row included four generations of the same family who all appeared to enjoy themselves. It is delightful to know the holiday theatrical landscape this season is blessed by so many top notch and varied selections. Check out It’s a Wonderful Life: Live in Chicago! while you still can. You will be all the merrier for the experience.
American Blues Theater It’s a Wonderful Life: Live in Chicago! is playing through December 27, 2015
Related ItemsAmanda TanguayChicagoChristmasIt's a Wonderful LifeJimmy StewartJohn MohrleinNewSuzanna BowlingTimes Square ChroniclesZach Kenney
Entertainment

Maurice Hines Tappin’ Thru Life
My View: Norm Lewis Had The Wrong Title To His Show