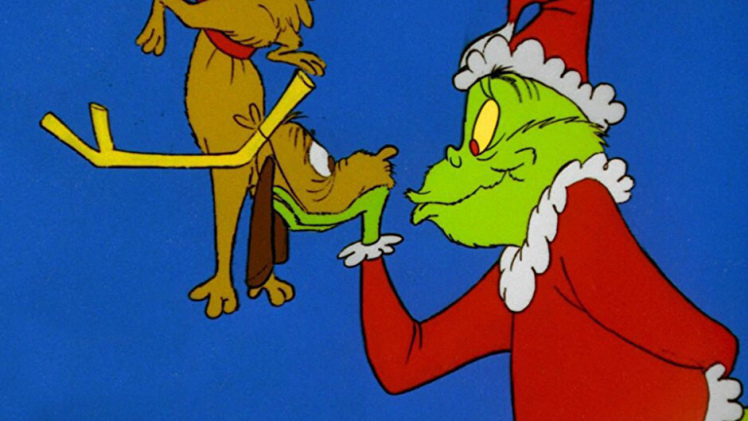 Ross
Every Christmas, I like to watch three things on television to get me in the mood for the holidays. Each one brings me one step closer to the spirit of the holidays and each one has been a part of my holidays for as far back as I can remember. There’s my favorite, “A Christmas Story” (1983), the one where all that Ralphie wants is an official Red Rider carbine action 200-shot range model air rifle BB gun with a compass in the stock, and this thing which tells time – “poetry, sheer poetry”. Then there’s ‘How The Grinch Stole Christmas‘, not that horrific live action one with Jim Carrey, but the animated one voiced by Boris Karloff, and finally, the 1946 black and white Frank Capra film, “It’s a Wonderful Life” starring the wonderfulJimmy Stewart and Donna Reed as good guy, George Bailey and wife, Mary Hatch. I can survive the holidays if I don’t get a chance to see Scrooge, Rudolph, or marvel at The Miracle On 34th Street, but without Ralphie, the Grinch, or Zuzu’s petals, well, Christmas wouldn’t be Christmas.

So far this holiday season I’ve seen two out of the three requirements, but both in ways that I didn’t expect and both wonderfully different. Last weekend I was lucky enough to be at my friend’s home in Princeton who had cable TV (I’m a streamer of television at home). We watched A Christmas Story – The Musical, LIVE on Fox TV, a musical from the boys who brought Dear Evan Hansen to Broadway. Benj Pasek and Justin Paul wrote the music and lyrics,  and Joseph Robinette wrote the book for this film-to-Broadway adaptation years ago (it opened on Broadway in November 2012 at the Lunt Fontanne Theatre and ran for a limited engagement through December). I missed it then, and ever since I’ve always wanted to see it. I even dragged my parents to a production of A Christmas Story at London, Ontario’s Grand Theatre, only to discover during Act One that this was not in fact the musical version, just a stage version of story. Disappointing is all I’ll say on that matter.
But this time around, it was most definitely going to be the musical version, and the cast sounded compelling and appealing. For the live broadcast, it starred Matthew Broderick (The Producers) as the narrator/older Ralphie, the wonderful Chris Diamontopoulos (The Full Monty, Waitress) as the father, the glorious Maya Rudolph (“Bridesmaids”, “The Way Way Back”) as the mother, the incredible Ana Gasteyer (Broadway’s The Royal Family, Encores’ A New Brain) as Mrs. Schwartz (her number was astounding), and introducing the phenomenal Andy Walken as the glass wearing B.B. gun-focused Ralphie Parker. Sounds good, but it was really Jane Krakowski (She Loves Me) as Miss Shields that tipped this production happily over the edge. So I made a deal with my Princeton hosts, I had to watch ‘A Christmas Story the Musical‘regardless of all else. Not a hard bargain to make, knowing that my good friend is as much of a Broadway junkie as I am (she wrote the recent review of Wicked), and her husband, while being a newbie to the theatre world, is definitely on the way to joining our club (he did ugly cry during Dear Evan Hansen so that pretty much assured membership).

I’m not going to say too much about the LIVE production beyond everyone was pretty spot on, especially Walken who hit every mark magnificently. He’s such a pro for an 11 year-old, as the pressure must have been huge starring in a live musical Broadcast televised on National TV, and he nailed it beautifully. As did Krakowski. It’s no surprise why they wanted her for the part of the teacher, Miss Shields. Krakowski has the comic chops, the singing voice, those amazing dancer moves, and those long gorgeous dancer legs that are perfect for the show-stopping number, “You’ll Shoot Your Eye Out“. It was a pretty amazing production, maybe one of the best LIVE musical broadcasts as of late that I have seen (although I haven’t seen many). Broderick stumbled a bit here and there, but his voice crackled with the same old school quality that this show requires. Overall, I’d give it a B+++ for B.B. gun awesomeness.
Over at the Irish Repertory Theatre, I checked the second viewing requirement off my list in a manner unlike any other Christmases before.  Adapted by playwright, Anthony E. Palermo (Audie Award winning radio performer, dramatist, and educator), this strong theatrical company is performing the radio play of It’s a Wonderful Life in the same manner as it would have been done when a different adaptation (there have been a number of them) first aired in 1947, on Lux Radio Theater (March 10) and then twice on The Screen Guild Theater (December 1947, March 1951). This play presented as a 1940s radio show is based on the 1946 film and on Philip Van Doren Stern’s short story and booklet The Greatest Gift published in 1945. James Stewart and Donna Reed who starred in the classic Christmas film actually reprised their roles for all three of those radio productions. What a treat that must have been. And what a treat this radio play adaptation is as well.
At the Irish Rep’s studio space, the radio sound stage is set, lovingly designed by James Morgan (IR’s Gaslight), with lighting by Brian Nason (Broadway’s A Month in the Country), period perfect costumes by Barbara A. Bell (Pearl’s Taste of Honey), and inventive live sound design by Zachary Williamson (IR’s Molly Sweeney). Skillfully directed by Charlotte Moore (The Home Place), the actors slowly make their way into the radio theater, arriving for an evening’s work performing this well known story of a good man who has lost his way.  The cast takes their places on the chairs under the “ON AIR” and “APPLAUSE” signs, with two microphones up front. There is an easiness in the air and camaraderie amongst the lot. The SFX artist and pseudo stage manager, played by the very appealing Rory Duffy (IR’s The Shaughraun) has everything all ready to go, and starts the count-down.  The cast; the sweet Haley Bond (Cherry Lane’s Big Mistake) as Mary Hatch Bailey and Mrs. Davis; the wonderful Dewey Caddell (York’s Dear World) as Clarence, Mr. Potter, Pop Bailey, Gower, and Martini; the perfect and funny Orlagh Cassidy (IR’s The Field) as Ma Bailey, Ma Hatch, cousin Tilly, and so many others; the solid Duffy as Officer Bert, Dr. Campbell, Sam Wainwright, Sheriff Randy, and others; the wonderful Aaron Gaines (Peccadillo’s The Show-Off) as George Bailey; and the talented Ian Holcomb (TFANA’s Macbeth) as the Announcer, Superintendent of Angels, Uncle Billy, Harry Bailey, Ernie, Nick, and Mr. Carter; all play their numerous parts with relish and joy, surprising us all with their versatility, energy, and stage presence.  They really do a spectacular job connecting us to the film while keeping us with them in the radio theater.  In particular, Gaines and Caddell sound so similar to the actors, Stewart and Henry Travers (Clarence), that their chemistry on stage is touching and feels very authentic, just close enough to bring a tear to my eye, without sounding like impressions.
George Bailey, a man who gave up all of his dreams in order to help others contemplates suicide on Christmas Eve.  He’s in a bind, and struggling to know which way to turn. In the film, one of the prayers that brings about the heavenly intervention pleads, “He never thinks about himself, God, that’s why he’s in trouble” while another says, “George is a good guy, Give him a break, God“. The Superintendent of the Angels hears these prayers and sends Clarence Odbody, Angel 2nd class. Clarence shows George all the lives he has touched and how different life in his community of Bedford Falls would be had he never been born. Somehow, in that small theater at the Irish Repertory, these fine actors, with a solid script, tell us this well-known story, and it sings as well as you could hope for. The end wraps it up a bit too quickly, and doesn’t have the emotional ring to it like the film, but it is amazing how in 70 minutes they accomplish so much. What a lovely Christmas treat they have given us, and I applaud them, with or without that sign telling me to or not.
Now, all I need to do is watch “How the Grinch Stole Christmas” over the next few days, and I’ll be all set for the holidays. What’s on your list? Happy Christmas everyone, and just “remember George, no man is a failure who has friends“. Isn’t that right, Mr. Grinch?

Suzanna BowlingMay 16, 2022
Read More
Scroll for more
Tap
He Says: Farinelli and the King: The Man and the Singer Heal a Monarch, Majestically.
Face to Face With Desperate Measures’s Lauren Molina