I have to start off by saying, I have never been a fan of The Book of Mormon. I am, however, a big fan of Ethel Merman. As a matter of fact, on cue, I can break into song sounding just like her. In the new Off-Broadway parody, The Book of Merman, the show tries to mimic both and fails in the Merman portion. Carly Sakolove has a wonderful voice and can move well, but she cannot do Merman. Merman’s voice was strident with a nasal quality. She had exquisite timing. Though I have seen Ms. Sakolove do some wonderful impressions, this is not one of them. But I am getting ahead of myself. 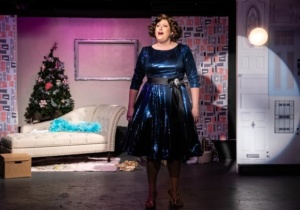 The show starts with two Elders named Braithwaite (Kyle Ashe Wilkinson) and Shumway (Chad Burris) singing “Hello” to the door-slamming residents of I assume a different dimension of Hollywood. Their church has sent them on a mission to offer salvation. Braithwaite is a by-the-book rule-follower, while Shumway is bored out of his mind and dreams about being on Broadway. After several rather rude encounters, they meet Ethel Merman coming out of her home. Thinking they need a donation, Merman invites them in and we get sophomoric renditions of classic songs such as “Most People” (“Some People”) and “Anything You Can Do” changed to “Better Than You”. This song though shows why I wasn’t a fan. “Anything You Can Do” has six syllables and “Better Than You” 4, musically it just doesn’t work. A simple fix would have been “I Am Better Than You”. 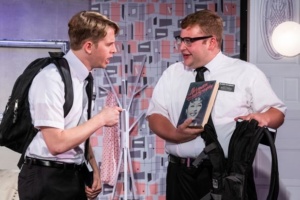 They curse using phrases like “Son of a Motherless Goat”, sing double-entendres to a song called “If It’s Not Hard, I Don’t Like It” and badly rap to Gilbert and Sullivan’s “I Am the Very Model of a Modern Major-General”, as a joke to Ethel’s 1979 disco album. The album did not sell particularly well, but the record became a camp classic, with vinyl copies highly sought out by collectors. They do a take-off on this, but they forgot that though it may not have sold well, it is coveted. Funnier song. 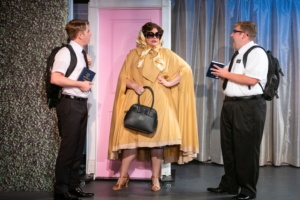 Chad Burris and Kyle Ashe Wilkinson are terrific as the Mormon’s and both have fabulous voices. They are perfectly cast. Again, Ms. Sakolove can act and sing, but she never sounded like Merman to me. Together, the three sing wonderful harmonies and move well. 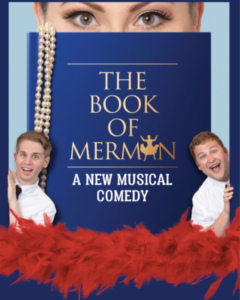 Joe Langworth directed and choreographed this piece with ridiculous camp, which kept the show moving. His choreography was quite wonderful. Leo Schwartz (book, music, and lyrics) and DC Cathro (book) have a clever premise and a great message, but I just did not find any of this funny, nor did my guest.

Pablo Borges’ costumes work well for the Mormon’s and I loved the dark glasses for Merman. The set and lighting by Josh Iacovelli even had an artificial Christmas tree, which the real Ethel Merman kept up year-round because of her love of the holiday and its message of goodwill. The three-piece band which features music director Aaron Benham on piano, Kris Rogers on bass, and Brandon Ilaw on percussion was slightly muffled, but Mr. Benham did some wonderful work with the singers because, despite everything, they had wonderful harmonies and were musically terrific.

The Book of Merman does have a great message about becoming yourself. The two missionaries are closeted and since Merman became a gay icon, this makes sense. She tells them “You’re The Best” (“You’re The Top” from Anything Goes) as she also becomes herself. Ethel Merman died in 1984 and it turns out Bette Davis and Elvis also reside in her cul-de-sac, so we are defiantly in an alternative universe.