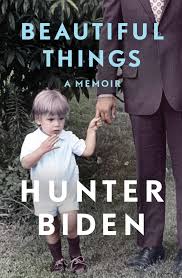 Talk about a PR spin, as millions are struggling to pay rent and put food on the table Hunter Bidden gets a $2million advance book deal, for claiming he kicked a drug habit that was on a laptop that main stream media REFUSED to acknowledge. Only one news organization in the country mentioned the laptop.

On the laptop was Biden with young girls, smoking crack, knocking up strippers, sleeping with celebrities, doing lines of coke with ex-President daughters and being given a 2.8-carat diamond that’s worth $80,000 from a Chinese tycoon named Ye Jianming. Jianming had ties to the Chinese military and intelligence services, was the chairman of CEFC until he disappeared after being taken into custody by Chinese authorities in early 2018. Could this be why China is considered no longer a threat and President Biden’s relationship with China is so close?

Hunter also got hundreds of thousands of dollars from Ukrainian energy companies, where he had NO background.

“It gave me hope that my boy is back” President Biden chocked back crocodile tears as he talks about Hunter’s upcoming $2million advance memoir that deals with his struggles with drugs. The book has a release date of April 2021.

Also in the news is that Hunter and his family moved into a $5.4 million Venice Beach home owned by Sweetgreen co-founder and CEO Jonathan Neman.

I can imagine being a proud parent when you son kicks a drug habit, but sources say otherwise. For those people who bravely faced their demon’s this is one kick in the face!

Brad BalfourFebruary 14, 2022
Read More
Scroll for more
Tap
Meet Rosemary Novellino-Mearns a Dancer Who Thought More About Saving Radio City Music Hall Than Herself
My View: Is There A Cabaret Convention in South Florida’s Future?