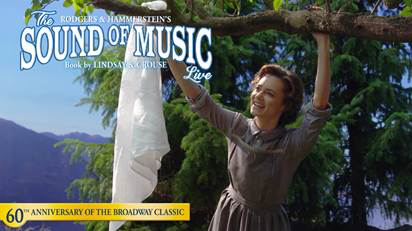 Starting today, ITV’s 2015 production The Sound of Music Live is set to premiere on BroadwayHD, the only streaming service offering premium full-length stage plays and musicals captured specifically for multi-platform viewing to theatre fans across the globe. This live broadcast production of Rodgers and Hammerstein’s timeless classic is directed by BAFTA-nominated Coky Giedroyc and stars Kara Tointon (Mr Selfridge, EastEnders) and Julian Ovenden (Downton Abbey), and is another testament to BroadwayHD’s dedication to providing theater lovers unlimited access to quality productions from Broadway, The West End, and beyond.

The more you see it, the more it becomes one of your favorite things! Since making its Broadway debut in 1959, Rodgers and Hammerstein’s perennial classic has been embraced by audiences around the globe.  Now, in celebration of its 60th anniversary, The Sound of Music Live, an ambitious, live-broadcast production from BAFTA-nominated director Coky Giedroyc, will be released on BroadwayHD on January 31.

In this exciting production of the universally beloved musical which made its broadcast debut in the UK on ITV, the enchanting Kara Tointon (Mr Selfridge, EastEnders) delivers a “mesmerizing performance and incredible vocal talents” (Daily Mail) as Maria, an apprentice nun who is tasked with caring for the children of a retired naval officer (Julian Ovenden, Downton Abbey).  With Maria’s love for music and unwavering confidence, she brings a new zest for life back into the household.  The performance is supported by Katherine Kelly (Mr Selfridge, Coronation Street) as Baroness Elsa Schraeder and Alexander Armstrong (The Armstrong and Miller Show, Danger Mouse) as Max Detweiler, and also features two songs not in the original movie but part of the stage show since 1959, “How Can Love Survive,” and “No Way to Stop It.” The Sound of Music Live also features showtune favorites like “The Sound of Music,” “Edelweiss,” “Sixteen Going on Seventeen,” “My Favorite Things” and many others.

BroadwayHD, founded in 2015 by Tony Award® winning producers Stewart F. Lane and Bonnie Comley, is the only streaming service offering premium full-length stage plays and musicals captured specifically for multi-platform viewing to theatre fans across the globe. In addition to exclusive live-streamed content of the world’s best productions, BroadwayHD offers subscribers unlimited on-demand access to a library of more than 250 theatre productions from Broadway, The West End and beyond.  If You Can’t Get to Broadway, Get to BroadwayHD.

Genevieve Rafter KeddyNovember 24, 2022
Read More
Scroll for more
Tap
You Are There At The Opening Night of Carmelina at The York Theatre
The York Theatre Company Brings Back Enter Laughing: The Musical to Kick Off 50th Anniversary Celebration