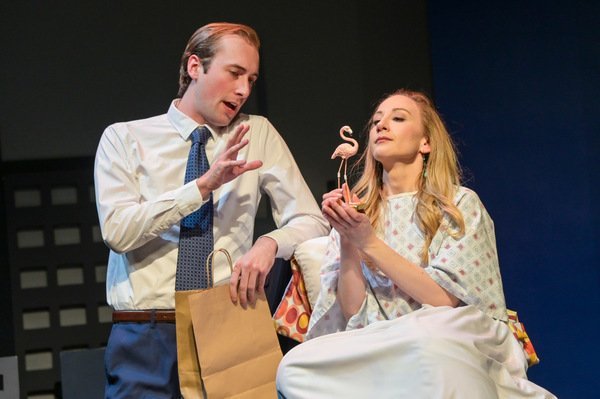 J2 Spotlight Musical Theater Company has launched its inaugural 2020 season with three musical gems: Seesaw (February 13-23, 2020), No Strings (February 27 – March 8, 2020) and A Class Act (March 12-22, 2020) at Theatre Row (410 West 42nd street). The productions will include frequent lagniappes designed to enhance audience appreciation of the classic works. Lagniappes: from the Louisiana French, meaning a bonus or a gift. These will include cast talk-backs, visits with the producers, and even interviews with the cast and personnel of the original productions.

Seesaw, is known for its book by Michael Bennett, choreography by Gover Dale, music by Cy Coleman and lyrics by Dorothy Fields, based on the play Two for the Seesaw by William Gibson. Uncredited assistance came from playwright and play doctor Neil Simon who gives the musical some of its best lines.

The story tells of the love affair between Bronx dancer Gittel Mosca (an adorable Stephanie Israelson), a single, loveable lunatic who lives life to the fullest and Jerry Ryan (a winning Andy Tighe), a lawyer who has recently separated from his wife and has decided to start over in New York City. The two begin a courtship despite the fact that they are polar opposites, but by the show’s end Jerry goes back to his wife and leaves Gittel heartbroken.

It is hard to care for Jerry by the end, as he wants Gittel to constantly want him. When she finally gives her whole being to him, is when he goes back to his wife, despite the fact the wife is there with divorce papers.

I have long been a fan of the score, but until last night I didn’t really know the story. It was amazing to see where these songs got their meaning. For years I sang “Nobody Does It Like Me,” “Welcome to Holiday Inn” and “He’s Good For Me” and my subtext was no where near what these song are meant to say in the show. Sometimes it’s better not to know.

Playing the Tommy Tune role of David was J. Savage who nearly steals the show with production numbers that include “Chapter 54, Number 1909” and the exuberant “It’s Not Where You Start,” smartly choreographed with fabulous tap by Caitlin Belcik.

For a first production of a new company, I give them a yah yah and wish them the best of luck. Thank-you for allowing me to see a show I have always loved because of the score.