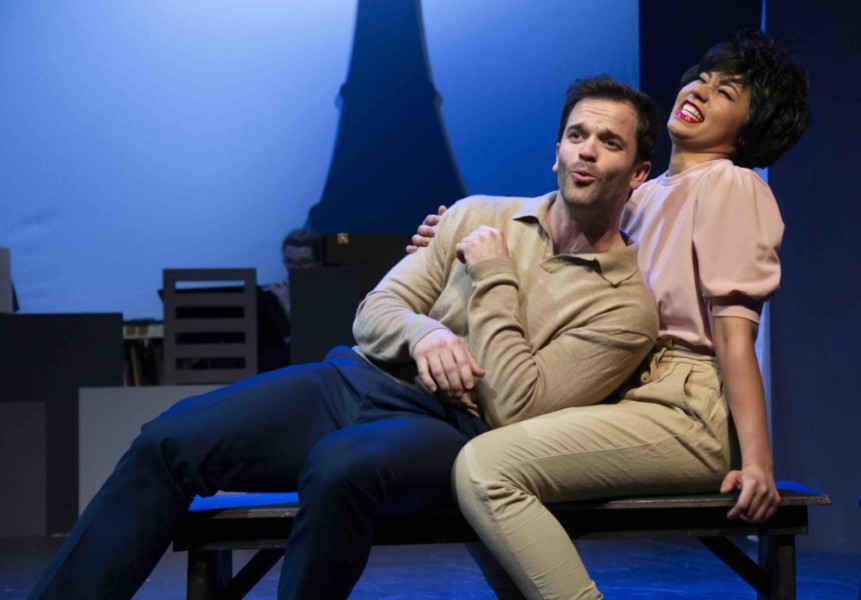 No Strings, is historic for several reasons. First this was the only Broadway musical to which Rodgers composed both music and lyrics. The musical opened on Broadway in 1962 and ran for 580 performances. It received a Tony Award nomination for Best Musical and won a Tony for Rodgers for Best Score of a Musical. Joe Layton directed and choreographed and won a Tony for the later. The show starred Diahann Carroll and Richard Kiley, with Carroll winning a Tony Award for Best Actress in a Musical. This was a first for an African-American actress on Broadway.

The show follows Vogue cover fashion model Barbara Woodruff (Keyonna Knight), living in Paris, who meets and falls in love with expatriate American David Jordan (Cameron Bond), a Pulitzer Prize-winning novelist who has suffered from an intense case of writer’s block since his arrival in France. She attempts to restore his confidence in his creativity, but the easy life he’s enjoying, flitting about Monte Carlo, Honfleur, Deauville and St. Tropez, is too much of a distraction. He finally realizes he can work only if he returns home to Maine, he invites her to go with him, but they have no future together, so they part with “no strings” attached.

As the leads Cameron Bond and Keyonna Knight have no chemistry. The show which was written for Carroll, has Barbara a front cover fashion model. Ensemble member Ashley Lee looks more the part and has more sparkle and shine. Ms Knight’s voice is too brassy for the lush melodic Rodgers score and her acting is blasé. As for Mr. Bond, he just seemed more interested in his friends. Who’s shines is Sandy York, as Mollie Plummer, the Vogue editor; Anne Wechsler, as Comfort a rich American heiress; Annabelle Fox, as a French assistant and Tim Ewing as the older man who supports Barbara. Each of these terrific performers manages to carve out a niche for themselves. Rounding out the cast are Jordan Bollwerk, Patrick Connaghan, Luke Hamilton, Heather Klobukowski, Ashley Lee, Logan Mortier, Anne Otto and Emilee Theno.

The show is being revived by the new J2 Spotlight Musical Theatre Company, under the direction of co-founders Jim Jimirro and Robert W. Schneider. No Strings was directed and choreographed by Deidre Goodwin who doesn’t always understand, this is a postage stamp stage. Less would be much more affective.

It was wonderful to hear “The Sweetest Sounds”, “No Strings” and “Nobody Told Me”, as well as this terrific Rodgers score.

I look forward to J2 Spotlight ‘s next production, A Class Act running March 12th through the 22nd.

Suzanna BowlingJune 7, 2021
Read More
Scroll for more
Tap
The 2020 Olivier Award Nominations Includes Judy Kuhn For Fiddler on the Roof
Once Upon A One More Time, A New Musical Set to the Hits of Britney Spears