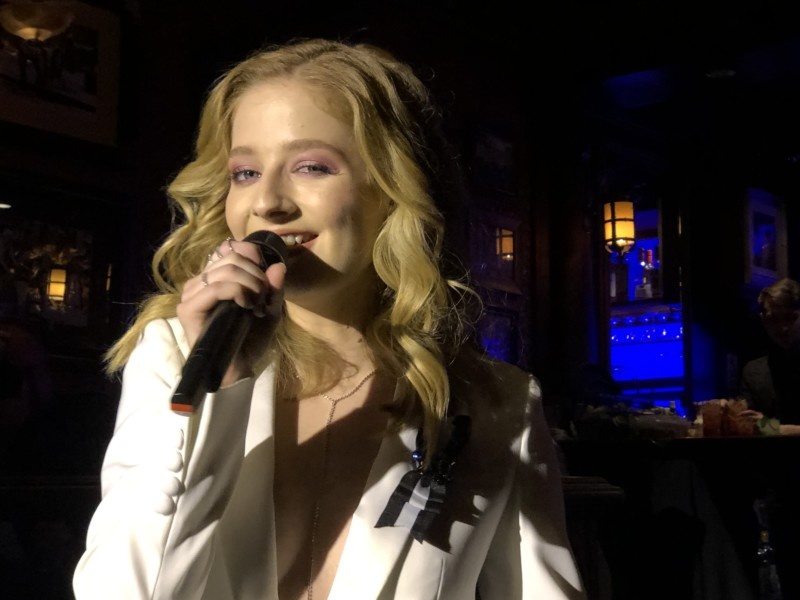 Jackie Evancho became famous at 10-years-old as a finalist on “America’s Got Talent”. Now 19th, she just released her first album as an adult, “The Debut”. This album is a departure from her classical crossover music and is comprised of Broadway numbers, each of which Evancho selected herself and put her own spin on.

Evancho dealt with severe backlash after singing the national anthem at Trump’s inauguration in January 2017. Evancho, older sister, Juliet, is transgender. Evancho performed so her sister who was vocal about her desire to discuss transgender rights with Trump could happen, but that meeting never came. “I am so pro-LGBTQ”, and that hurt.

Evancho perform at the famed Feinstein’s/54 Below April 23 in support of her new album and sold out the venue. The good news is she will be back.

Jackie’s show, was written and directed by acclaimed theatre and concert director Will Nunziata. He really knew how to blend the different qualities of Ms. Evancho’s voice so that her appealability is met with a broader range.

Evancho entered and covered the room singing “Pure Imagination” mashed up with “Some Enchanted Evening.” She followed that up with “A Million Dreams” from The Greatest Showman. Then the beautiful singer lapsed into “Music of The Night”, “The Point of No Return” and “All I ask Of You” from The Phantom of the Opera. This girl is the perfect Christine and really should be playing this role on Broadway.

I especially liked Ms Evancho’s versions of “Burn” from Hamilton, “I’m Not That Girl” from Wicked mashed up with “She Used To Be Mine” from Waitress, and “Whispering” from Spring Awakening. Her smokey register that is less a perfectly placed soprano, is interesting and highly appealing. “Requiem” from Dear Evan Hansen mashed up with “Falling Slowly” from Once was another favorite set.

“Somewhere” from West Side Story, “No Day But Today” from Rent, The Impossible Dream” from LaMancha and “Once Upon a December” from Anastasia also made the list. Anastasia is another role that is perfect for this young star.

For the classical fans “O Mio Babbino” mashed up with “Nessun Dorma”, hit the rafters and were spellbinding. But it was her closing number Queen’s “Somebody To Love”, that was the biggest surprise.

Her musical director Jorn Swart was on piano, Horace Bray was on guitar, Leon Boykins was on bass and Devin Collins was on drums. These are all musicians at the top of their game.

Evancho’s voice is flawless and at time a little too perfectly placed. I would really like to see her go more for the acting of the song than the placement, but she is young and that all comes with time and living.

You can see Jackie Evancho at Feinsteins/ 54 Below June 11th, but make sure to RSVP because this girl has a major fan base.