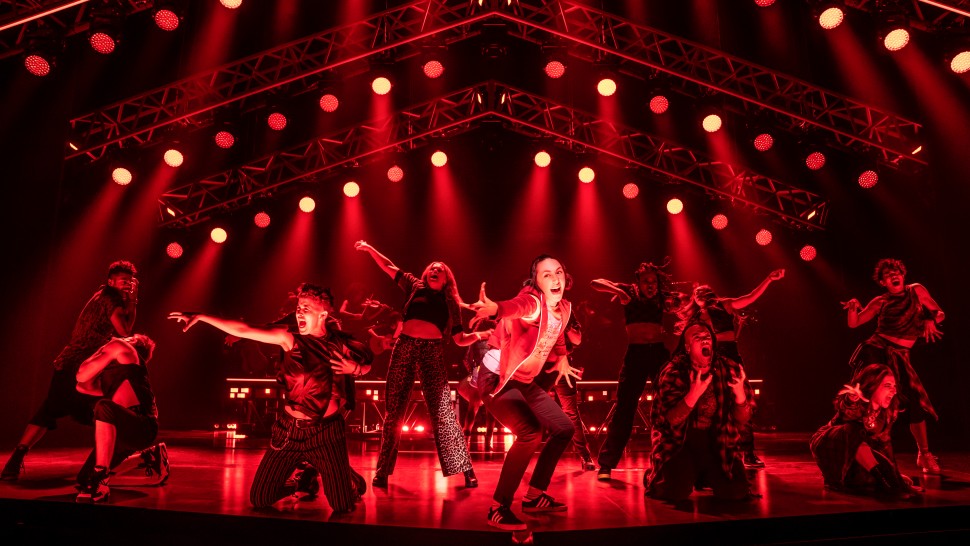 Lauren Patten and the Company of Jagged Little Pill. Photo by Matthew Murphy.

I was so excited to see Jagged Little Pill. I had be privileged to listen to the CD before hand and Tom Kitt’s orchestrations were superb. The vocals were perfectly blended and it kept Alanis Morissette’s 1995 pop-rock album alive, but with a new edge. Then I saw the show. The music that sounded so glorious on the CD, is just loud and in your face. Sound designer Jonathan Deans should be jailed for how these vocals and orchestrations sound.

The show that is geared towards the 20 year old market, felt like coal in my stocking. This show is so full of angst ridden people and teens whose disregard should be made to support their families or at least themselves for a year, before they rail against how much they despise them.

We are introduced to the Healy family from white bread Connecticut. Steve Healy (Sean Allan Krill), who works way too much to give his family the lifestyle, in which they spend his money is condemned for not being present. Why he isn’t having an affair on his wife Mary Jane (Elizabeth Stanley), who is addicted to the pain pills she was given due to a car accident, is beyond my comprehension. Instead he is addict to porn. Mary Jane is cold, heartless and you really do not like her. Her kids consist of Nick Healy (sensitively played by Derek Klena), the golden child pressured to be an over achiever by his parents and teachers. Nobody can live up to the expectations put on this teen. Then there’s Frankie (Celia Rose Gooding), who feels uncomfortable as the black adopted daughter in a white Connecticut family. She is ungrateful in every sense of the word. Why she is so angry is inconceivable. In a school where these kids have money, she wants them to provide free tampons and kotex.

At the top of the show “All I Really Want” has the cast expressing about how they want their painful needs met. Ironically it is a song about blame and not about how they can make a difference or show some initiative.

The book by Oscar winner Diablo Cody, allows for no character development, nor does it give reasons why most of these characters are so self deluded.

The choreography by Sidi Larbi Cherkaoui is spastic, almost a protest of what dance should be. As Emily Rebholz’s costumes of shorts that are beyond short and grudge clothes seem as disjointed as this show.

The most pivotal songs go to Frankie’s girlfriend, Jo (Lauren Patten, giving a energetic and heartfelt performance). “Hand in My Pocket” has the teen talking about her strictly Christian mother and “You Oughta Know,” has her raging over the fact her girlfriend went bi and cheated on her.

Even that whole storyline seems contrived. 16 year old Frankie who seems so into Jo immediately wants and does sleep with Phoenix (Antonio Cipriano). When Jo finds out, she not only outs Frankie to her parents, but seems almost stalker like. Frankie when her parents find out, runs away. According to the authors, all 16 year olds should be given permission to have sex and not face consequences.

The one character that seems to have been thought out is Bella (the wonderfully sensitive Kathryn Gallagher). Assaulted at a party, she is mocked and put on social media by her classmates. She brings out the shame and guilt hidden in Mary Jane.

Diane Paulus, direction and Diablo Cody’s book just throw too much into the pot instead of grabbing one issue and really making a statement. Opioid addiction, racial and sexual identity, the effects of social media and teenage sexual assault are all covered here. The men no matter what they do are always to blame.

I was filled with just as much anger, after seeing this than what was presented upon this stage. Is this where the state of theatre has gone? If so I am extremely saddened by it. In a season full of joy, this show is basically countering with humbug.