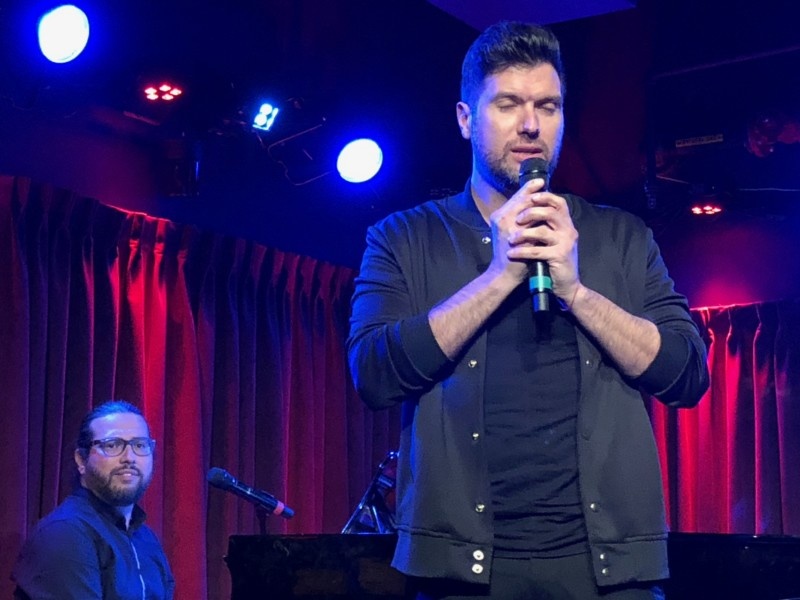 I am starting off this review with the second to the last song in the show by Jaime Lozano. Jaime, pronounced Hymie, is a Broadway, Mexican director, composer, arranger & orchestrator who is considered by Hamilton’s Lin-Manuel Miranda as the “next big thing”. Jaime’s Green Room 42 debut sold out performance follows his recent sold out concerts at Joe’s Pub and Two River Theater. I have known Jaime since 2016, but after hearing “The Other Side” sung by his wife Florencia Cuenca with lyrics by Neena Beber, I have a new found respect for this talented musician. “The Other Side” should be an anthem for all those who believe a wall is a vision of insanity. This song shows a new perspective that is not only human, but gives another way at looking at the situation. It is seriously a brilliant song.

“The Generic Immigrant Welcome Song” sung by Javier Ignacio (Lyrics by Noemi de la Puente), “I’ll Start Again” (The Bicycle Song) from The Last Supper, lyrics by Migguel Anggelo, Christina Quintana and Jaime Lozano and “Getting Up Is Easier” sung by Linedy Genao, lyrics by Marina Pires started off the evening of diverse music from the heart.

Backed by Joel Mateo on drums and Rudyck Vidal Espinosa on bass, Jaime Lozano made his orchestra sound rich, lush and full of Latin passion.

Mauricio Martinez is well known for his work in Mexican telenovelas and films. You can currently see him in Netflix’s Emmy-winning El Vato. This stage, screen and music star, made his Broadway debut as Emilio Estefan in On Your Feet! and took the show on tour. I first heard Mauricio though was in Jaime’s Children of Salt at NYMF singing “Enough is Enough” with lyrics by Lauren Epsenhart. He sang this impressive song last night.

Yvette Gonzalez-Nacer is starring in Hadestown on Broadway. She joined Mauricio Martinez for “DJ, Can You Hear? ” from Jaime’s new show Present Perfect, lyrics by Nancy Cheser.

His show Songs by an Immigrant features and all-Latino line up of Broadway stars, including his wife Florencia Cuenca. Singing tonight from A Never-Ending Line, lyrics by Neena Beber, “And the Years Go By” was byinspired Alex Lacamoire’s (Hamilton) sisters.

“Mountain in the Sky”, lyrics by Marina Pires was hit out of the park by a surprise guest sung by Elisa Galindez. The girl originally slated to sing the song called Jaime at 1am in the morning to say she was sick.

The comedically “If You Break My Sister’s Heart” was sung by Forbidden Broadway‘s Aline Mayagoitia lyrics by Linsday Erin Anderson, both songs were from A Never-Ending Line A female song cycle.

“Mi Perú” sung in Spanish by Javier Ignacio from Present Perfect, lyrics by Nancy Cheser, followed as did a new song debut last night, “Venezuela”, sung by and lyrics by Migguel Anggelo.

Ending the show “Dreamers” by Jaime Lozano and Jorge Castilla brought Mauricio Martinez back to the stage and ended the note on what Jaime Lozano is all about. Familia, music and the American Dream