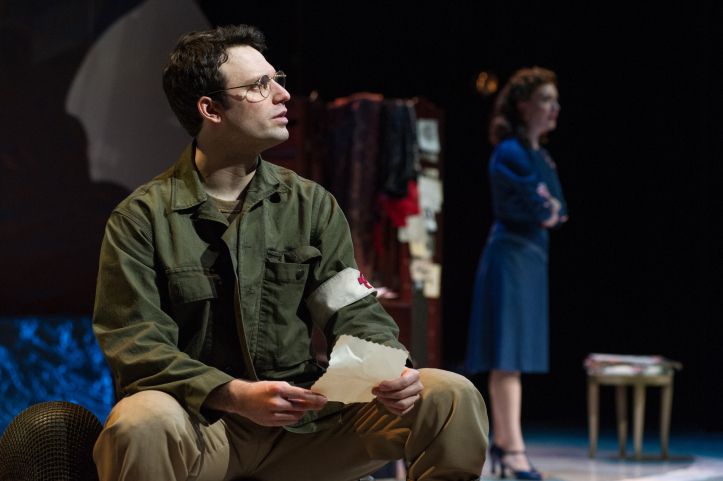 Actor Jake Epstein, who appeared on Broadway originating the role of Gerry Goffin in the Tony-nominated Beautiful: The Carole King Musical, and who fortunately also survived playing Peter Parker/Spider-Man in Spider-Man: Turn Off the Dark, is returning to Washington, D.C.  for Dear Jack, Dear Louise. It’s a romantic two-person play, penned by Ken Ludwig (Broadway’s Lend Me a Tenor), revolving most touchingly around how his parents met many years ago. It’s a classic meet-cute, and one Epstein is happily apart of.

Set in 1942 during World War II, a romance blossoms between U.S. Army Captain Jacob S. Ludwig and aspiring actress, Louise Rabiner, through a series of pen pal letters. Directed by Jackie Maxwell (Arena Stage’s Junk), Dear Jack, Dear Louise goes deep into the romantic hearts of two young lovers during the War, explains Ludwig, and sweetly envelops something far more personal than anything he has ever done before. The Army Captain begins to write to the young woman, hoping that someday they will meet, if and when the war allows. But the war continues, and it threatens to bring their relationship to an end, even before it really gets started. The heart-warming joyous story of wartime courtship through letters floats out with aplomb on the Kreeger Theater’s stage at Arena November 21 – December 29, 2019. Arena Stage’s Artistic Director Molly Smith beautifully states that the show “is a classic love story [with Ken] bucking his own trend by writing a two-person play, based on his parents, that brings us back to a time when written letters were the most important form of communication when separated“.

The handsome young Epstein was kind enough to sit down and chat with frontmezzjunkies as he prepares to take on the lead role of U.S. Army Captain Jack Ludwig, a military doctor stationed in Oregon, alongside the talented Amelia Pedlow (Studio Theatre’s Doubt) as Louise Rabiner, the aspiring actress and dancer in New York.

SR: What were your first thoughts when you read Dear Jack, Dear Louise?

Jake Epstein: I loved it. I related so much to the long distance struggle of the two characters because my wife and I were long distance for several years before we got married. And I found it so funny and thoughtful. I may or may not have cried immediately upon putting it down.

SR: Did you automatically know that this was a piece you wanted to be a part of? And what about the character rings the most true for you as an actor?

JE: Whenever I read a part I always ask myself: What can I bring to this character? What connects me deeply to the part?

I related to Jack’s genuineness, his slight inability to read social cues, his wanting to be brave, and I loved his transformation throughout the story from a formal and uptight army medic, to a romantic with a newfound sense of humor. On top of all that, I recognized so much of my dad in the part- my hero- and felt like I could try to do the character justice.

SR: Director Jackie Maxwell talks about the joy, humor, and humanity of Jack and Louise’s story. How does this story resonate for you?

JE: I agree with Jackie that it’s filled with comedy and humanity. The backdrop of the story is the Second World War, and yet, despite the horror that surrounds these characters, their connection becomes a genuine source of humor and life. The play is such a testament to the people of that time who bravely sacrificed everything, and yet still tried to continue on with their lives.

SR: Actual hand-written letter writing and the idea of pen-pals have become foreign to most in our current social communicative dynamic, where do you see the similarities/differences to the modern way we create romantic interactions?

JE: I think I’m the last person who should be commenting on romantic interactions! But what I love about this play is that it shows how courting (a word I don’t use very often!) has not changed. People are looking for genuine connections. And the similarities between letter writing and online dating are immense. It’s a total wink to where we are today and how people find each other and date in modern times, while being set in the 1940s.

SR: Tell me about your romantic connections to what these two construct, and how do you see the play enlisting that emotionality?

JE: I think the connection Jack and Louise has is very romantic! (In my own clumsily romantic opinion). They have never met, and rely on the written word to sustain their full relationship. As I mentioned before, I personally related to their relationship very much from my own life, particularly the comedy and struggle that goes into trying to use words to make up for being so far apart.

SR: Tell me a bit about what it was like to work with former artistic director of The Shaw Festival, Jackie Maxwell and two-time Olivier Award-winning playwright Ken Ludwig? Must have been a bit overwhelming and exciting working with two such powerhouses.

JE: Completely overwhelming! I am such a fan and couldn’t believe my luck when I got the chance to work with both of them. Ken is a comedic genius, and a brilliant mind. He was there for all of our ‘table work’ before we started putting it onstage, and I tried to soak in everything he said about the tone of the piece and the history of the time.

As for Jackie, growing up in Canada she is a bit of a legend. I grew up going to see her plays at the Shaw Festival and dreamed of one day getting to be in one of them. Besides her intelligence and attention to detail, she is a master storyteller. So much of our rehearsals were just about us sitting around and telling great stories. And I think that bled into the way that we tell this story.

SR: What’s been the most challenging part of this process for you?

JE: I never like to say that learning lines is challenging, because I think learning the words is the easy part- what you do with them is where the work comes in. However, there are a gazillion words in this play! So I’ll admit it was a massive challenge to learn the piece and get to a place where Amelia (who plays Louise) and I could actually play and feel like we were really communicating with each other.

SR: The most rewarding?

JE: There have been so many rewarding parts it’s hard to pick one. But one of the biggest question marks was how do we tell a story through letters and make it fun and theatrical? Much of our rehearsal time was spent workshopping how that could be possible onstage. And now that we’re doing it in front of audiences, it’s so rewarding to see it working and feel their total surprise at the unique way we tell this story.

SR: And tell me how it feels for you telling this story, as you look into your own future, and all the projects that are ahead of you?

JE: Being an actor isn’t easy- you’re always looking for the next gig. So when something comes along that feels meaningful and important, you feel like the luckiest person in the world. I’ve really enjoyed helping to create this piece and look forward to doing it in front of all the audiences this month. As for my other current projects, I’m looking forward to doing Paula Vogel’s Indecent in Toronto, as well as the remount of my solo show Boy Falls From the Sky.

Tickets can be purchased by going to arenastage.org. Dear Jack, Dear Louise will play at the Kregger Theater, Arena Stage from November 21 – December 29, 2019.