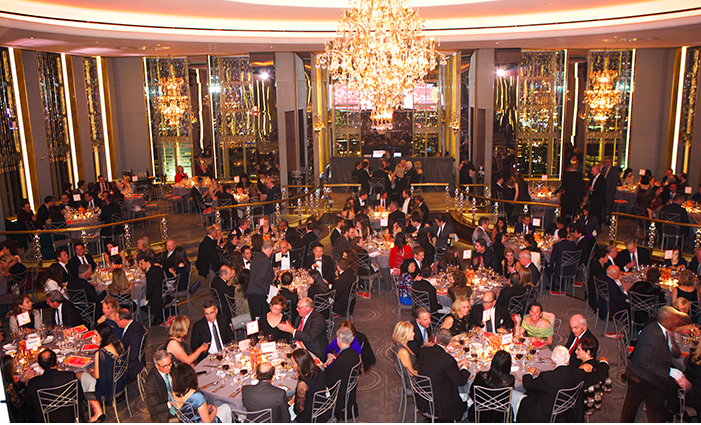 It is that special time of the year again. The James Beard Foundation has announced the details of its 2017 fall gala fundraiser JBF Gala: A Night of Award Winners. The special evening on November 10 will take place at the iconic Rainbow Room.

The 2017 fall gala fundraiser will feature a once-in-a-lifetime collaborative dinner by a distinguished lineup of James Beard Award–winning chefs and beverage professionals to celebrate Susan Ungaro for her extraordinary leadership as the Foundation’s president since 2006. The black-tie event will take place on Friday, November 10 at the iconic Rainbow Room in New York City, and will include a multi-course dinner with fine wine pairings; a live auction of priceless culinary experiences; dessert reception with live music; and more.

“Susan’s vast accomplishments such as spearheading impact initiatives, increased scholarship funding and creative awards programing, will allow the Foundation to be the leading force for good in the culinary industry,” said Fred Seegal, chair of the JBF Board of Trustees. “Under her leadership the Foundation has become a global brand and an indispensable organization for chefs and other culinary leaders around the world. This will be a magical and moving evening as we fete Susan on her remaining tenure as president.

The illustrious chef lineup will include:

The 2017 JBF Fall Gala menu will include:

The 2017 JBF Gala event chairs Henni and John Kessler; and Robin and Fred Seegal, and vice chairs Ellen Hanson and Richard Perlman will be heading up a special VIP experience that includes an exclusive kitchen tour, tasting, and photo opportunity with the evening’s chefs. Silent and live auction packages will support the James Beard Foundation’s mission and programs to celebrate, nurture, and honor chefs and other leaders making America’s food culture more delicious, diverse, and sustainable for everyone.

For more information about the JBF Gala: A Night of Award Winners, visit jbfgala.org. Tickets to the event are priced at $750 for JBF members/$1,000 for the general public and can be reserved by calling 212-627-2308. For table purchases, please contact Michelle Santoro at msantoro@jamesbeard.org or 212-627-111x 552.