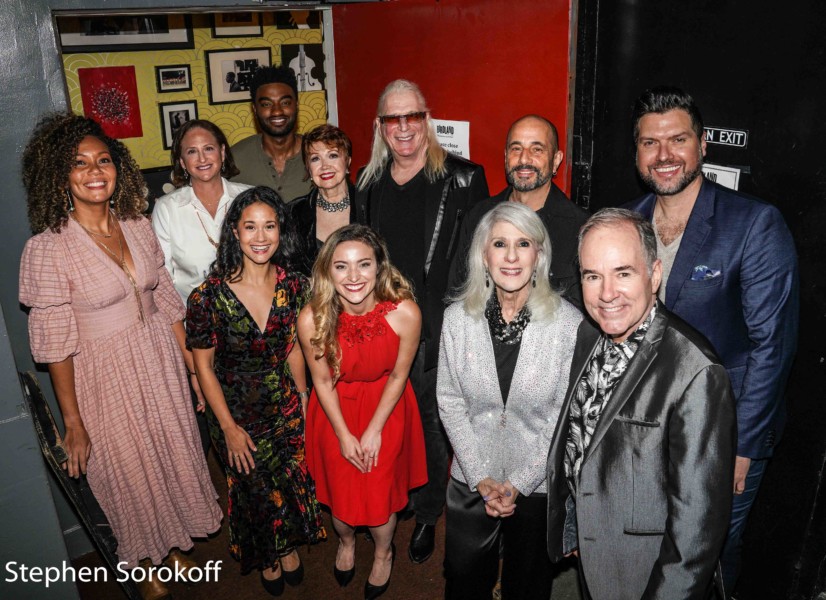 Jamie deRoy’s Award Winning Variety Show Jamie deRoy & friends made for an entertaining and hot night at Birdland. Jamie’s guests were some of Broadway’s best performers, who welcomed back the audience. The evening was a benefit for The Actors Fund and the Jamie deRoy & friends Cabaret Initiative, which helps a great many people.

Hostess/producerJamie deRoy started off the show with a hysterical parody called “I’m Too Old To Die Young”. Jamie really knows how to bring her audience joy.

Jamie’s first guest was Jelani Alladin (Frozen, Hercules), who brought the house to attention with “Let It Sing” from Violet and “Beautiful City” from the film version of Godspell.

Looking absolutely beautiful Ali Ewolt (The Phantom of the Opera, Les Miserables), brought her glorious soprano to “I Could Have Danced All Night” from My Fair Lady. She then treated us to “My Love” a new song by Jason Ma and his new show Gold Mountain, which was such a treat.

Mauricio Martinez (On Your Feet) sang in Spanish with “Mi Peru” a song by Jaime Lozano and Nancy Cheser. Having Just finished A Grand Night For Singing at Goodspeed he treated us to “Something Wonderful” from South Pacific in both in English and Spanish.

Tony Award Winner Donna McKechnie (A Chorus Line) shared stories of Stephen Sondheim and sang “Pleasant Little Kingdom” a cut song from Follies and “Too Many Mornings” which made it into the show. The audience was thrilled to see this dancing icon perform.

Lynn Ahrens and Stephen Flaherty were to perform together but Lynn had a family emergency. So Stephen played for Cassondra James (Once on This Island) who gloriously sang the cut song “Come Down From The Tree” from Once on This Island, the show that brought this songwriting team to Broadway.

Christy Altomare (Anastasia, Mamma Mia!), was the 11 O’clock number with a fabulous “Journey To The Past” from Anastasia. Seeing Stephen Flaherty play for her was a joy

The show was directed by Barry Kleinbort, with musical direction Ron Abel on piano. Also in the band was Ritt Henn on bass and Ray Marchica on drums.

Jamie deRoy who has won eight Tony Awards, eight MAC Awards, four Back Stage Bistro Awards and 13 Telly Awards for her extensive work on both stage and screen finished the evening with “Jews Don’t Camp”.

This was a memorable night with good friends, terrific food, great music and mirth.